These resilient plants are part of a centuries-long experiment at Michigan State University. 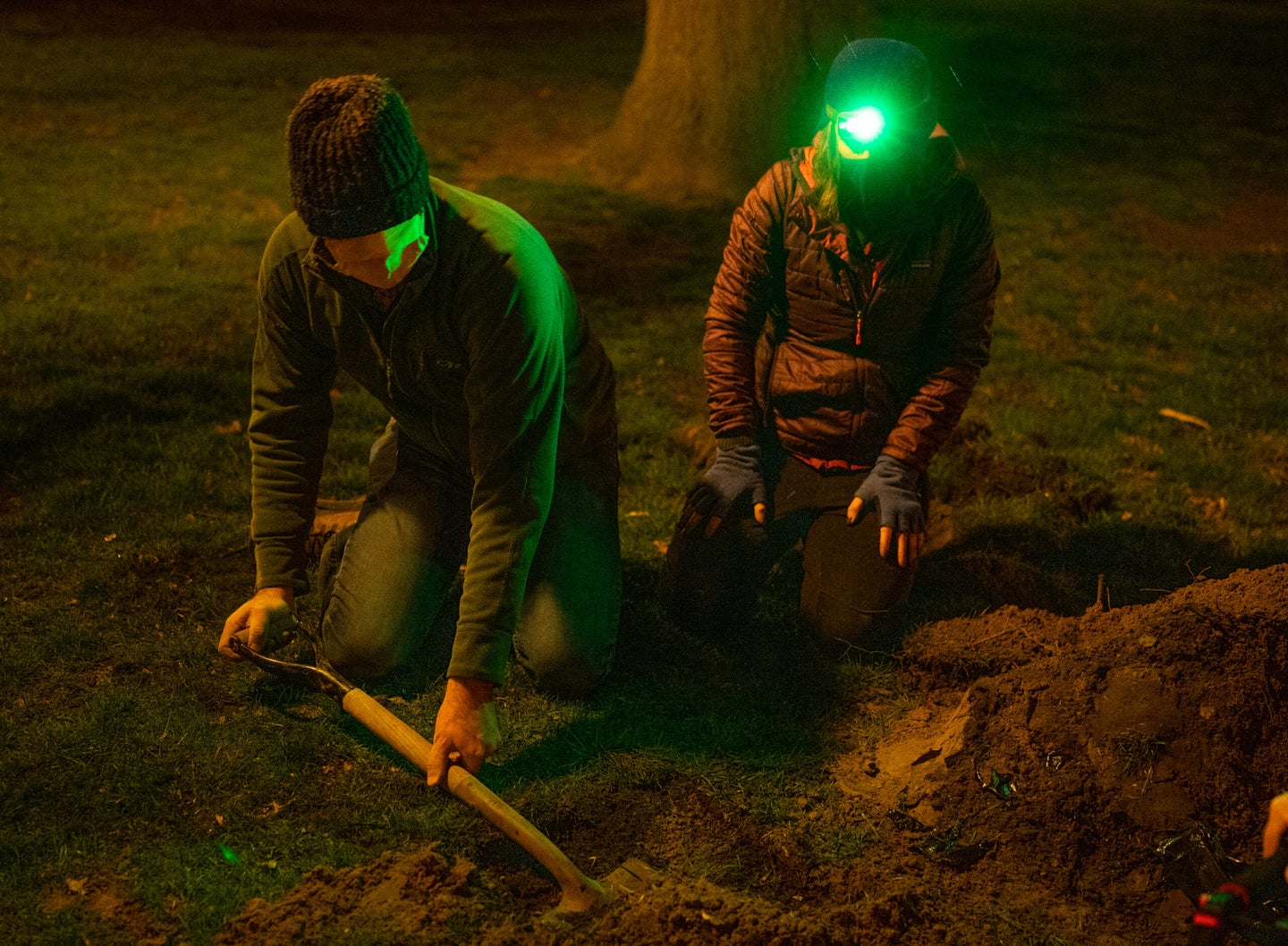 Under the cover of darkness, a team of scientists set out into a cold Michigan night in April, armed with flashlights and a map from 1879. It marked the secret location of an unlikely treasure: bottles of seeds from two centuries past, buried underground and patiently waiting for their turn to come to life.

All of these mystic items are part of an ongoing biology experiment at Michigan State University (MSU) called the Beal seed experiment, which seeks to find out how long seeds can remain viable in soil—and this recent successful germination of 13 seeds shows that the answer is at least 142 years. Named for botanist William James Beal, who started the experiment, the project has become an ongoing and living legacy of the university’s botanists.

To test his question all those years ago, Beal buried 20 bottles of seeds underground on the MSU campus, almost upside down but at a slight angle to avoid water collecting in them, while still allowing moisture and soil to enter. Each bottle contained 50 seeds from 21 plant species, for a total of 1,050 seeds per bottle. The intention was that a bottle would be dug up every five years, and the seeds within would be planted to see what could grow.

When Beal retired in 1910, he passed the experiment to fellow botany professor H.T. Darlington to continue his work, the first in a series of handoffs. In 1920, the length of time between unburyings was extended to 10 years, and in 1990 it was further extended to its current cadence of 20 years. The current bottle was originally scheduled to be unearthed in 2020, but the pandemic meant that the campus and the growth chambers within it were closed, so it was postponed a year.

Now, Frank Telweski, a professor of plant biology at MSU, is the most senior member of the team presiding over the bottles, having also unearthed a bottle in 2000. Teleski recently made the decision to expand the team beyond just one successor to represent a diversity of expertise on seed viability.

“Because of the diverse team, people have different perspectives and bring their different knowledge to it,” Telewski says. “We can begin to expand some of the things that Beal did, and really build upon the 140 years of science that has accumulated since he designed and started the experiment.”

The 13 seeds that defied the odds this year and germinated appear to be the same species: a weedy, fairly common plant with a yellow flower called Verbascum blattaria. The verbascum’s continued success proves that the resilient seed is a great choice for future experimentation on seed viability.

“I would have assumed that everything with really small seeds, naively, would not survive very long,” Lowry says. “You usually think that these larger seeds that are well provisioned with resources that would be able to survive for long periods of time in the soil, but that doesn’t seem to be the case. Now we know that there’s probably lots of things with very small seeds that can survive multiple centuries in the soil.” 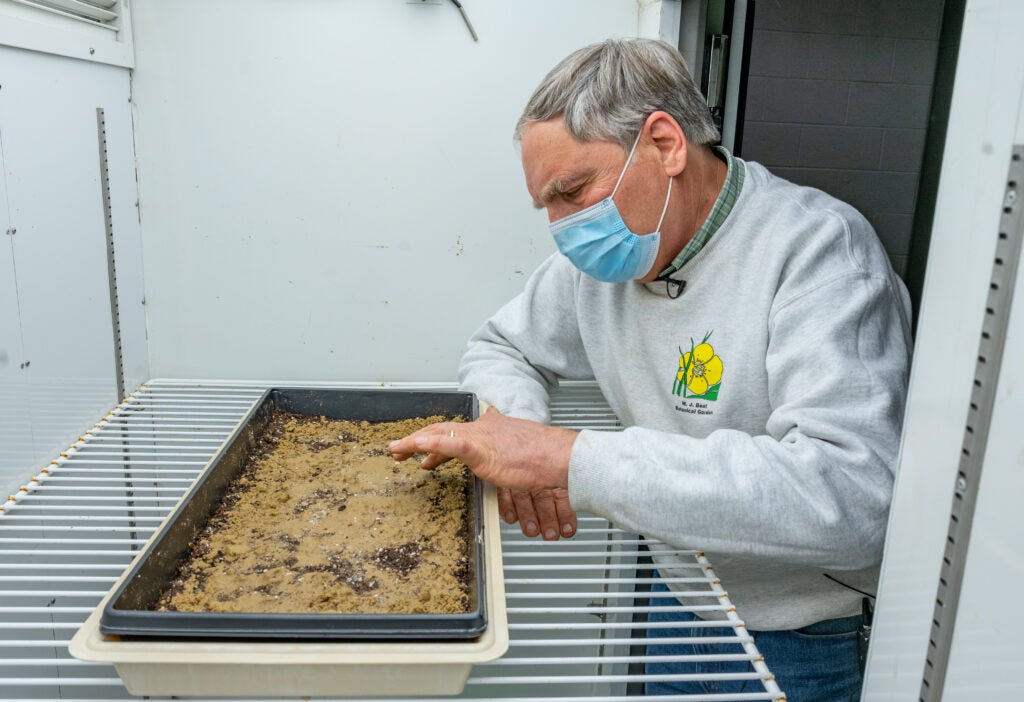 Frank Telewski spreads seeds from the Beal Bottle in a tray in the growth lab.

If no more plants germinate in about the next week, the team of scientists will try to jump-start growth through an eight-week cold treatment to simulate winter, a technique that yielded one additional seed germination in 2000.

Then, they will try some treatments new to this experiment, like a liquid smoke treatment that they predict could trigger the growth of fireweed seeds (which has never grown in all the years of the experiment). The idea is to simulate the chemicals in smoke that trigger germination for some species in environments with a regular burn frequency. They will also treat the seeds with gibberellic acid, a plant hormone, to stimulate growth.

Finally, Fleming will test the metabolic and nucleic acid activity of any seeds that didn’t germinate, as some seeds still could have some functional piece of their metabolism that has broken, making them unable to germinate.

“They’re kind of like zombie seeds, if you will,” Telewski says. “[Fleming is] going to see if she can’t find any of these that still show some level of life, but not enough to actually permit them to germinate. And that’s something that Beal probably never would have dreamt of being able to do.”

The successfully germinated plants will later be on display at the W. J. Beal Botanical Garden, an outdoor laboratory for students founded by Beal and where Telewski is the director.

Even so, the original question of seed viability remains unanswered, and only the continuation of the project could provide an answer.

There are four more bottles left in the ground, and at this pace the experiment is set to end in 2100. While the scientists have considered widening the gap between unearthings to a longer time like 50 years, if nothing grows it would be harder to know when exactly the seeds stopped being viable.

A longer cadence between unearthings would also bring up challenges with maintaining continuity between generations of scientists. Recent events have demonstrated the tenuous nature of the project.

“Frank handed me the map to the bottles and he’s like, ‘Just in case something happens to me, I want you to have the map,’” Lowry says. “The next month he had a stroke. Fortunately, he’s mostly recovered from it and that’s been amazing, but it was this realization that these things are fragile and you do have to have a number of people know where the bottles are. You also don’t want to stretch it out too long because there might not be that institutional memory that will allow you to keep the experiment going.”

What’s much more likely for the future is that the team will embark on a “Beal 2.0,” a second version of the experiment. But there are many questions to consider while deciding on the design of the new study, like what species of seeds to use, the location of the bottles and the pace for opening them.

What the researchers are pretty much set on, however, is having two bottles that will be dug up for each unearthing. The idea is to plant the seeds from one bottle, like in the original experiment. The second set would be used for destructive sampling, which is the type you need to properly analyze how DNA, RNA, and other metabolic processes are breaking down.

Although Telweski has already started to gather seeds that could be soon placed in new bottles, as of now, planning is still underway.

“What we’ve realized is that it’s the long game with this thing,” Lowry says. “These experiments are so long that it’s worth planning and making sure you’ve thought of everything you can before going forward.”