HQ is a very fun app with one extremely awful feature. 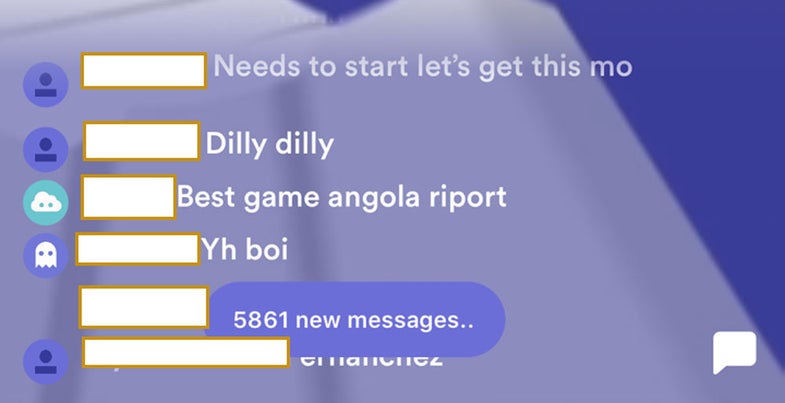 Last night, more than 350,000 people logged into a trivia app called HQ to try and answer 12 consecutive questions in hopes of winning a piece of an $8,500 prize pool (I got eliminated on question eight). The app revolves around a live, interactive game show that happens twice every weekday and once each weekend day. The audience for it has grown explosively in recent weeks, garnering good and bad press, and piling on leagues of new users every day. It’s a really fun app, but it’s hindered by an archaic feature that it should swipe away forever: the live chat.

This may seem like a trivial aspect of a hugely popular app, but the idea of live chat is in a transitional moment right now. Some analysts are calling HQ the future convergence of TV and app content, and that’s not too far-fetched, especially since news and sports programs have been so proactive about running tickers of viewer tweets along with the original content. Of course, those messages are often carefully curated, rather than splayed across the screen in real time.

HQ chat starts a few minutes before the actual game. Log in when you get the notification and you’ll likely find the endlessly scrolling stream of messages already moving at a good clip. The comments aren’t archived, you can’t post links, and there’s almost always a healthy smattering of vile messages that stay on the screen for a fraction of a second before scrolling up into the aether. It’s a place where you can endlessly shout (using caps lock) memes like “Dilly Dilly,” (a meme stemming from a beer commercial) or just post enormous blocks of emojis with no real rhyme or reason.

You can swipe the chat away and make it invisible during the game, but that begs the question: Why does it exist at all?

“We encourage people to use the chat feature to share their excitement, anger, shock, heartbreak, or any other emotion,” an HQ spokesperson told me via email. “We just ask that they maintain a chill environment for everyone.”

There’s no shortage of sharing. While HQ declined to offer specific numbers about how many chat messages happen each game, I observed some counts climb over 10,000 in the course of a 12-minute game. Some of the comments were from players that had already been eliminated, which is likely a reason to keep the chat around—to incentivize players to stay when their chance for prizes is gone.

Unfortunately, as with almost any online chat section, the environment doesn’t always remain totally “chill.” When Sharon Carpenter subbed in for the regular host, Scott Rogowski, for instance, the chat didn’t hold back on the repulsive comments about her. The display uses asterisks to automatically censor a list of predetermined obscenities, including most of the big ones that would have gotten you a trip to the principal’s office in grade school and some comments also disappear from the log if you follow them up the stream, presumably removed by moderators. But, HQ didn’t offer specifics on how exactly it polices those messages. A spokesperson said HQ uses humans and technology to “remove players who abuse the system.”

Still, the question remains why anyone would type anything into a chat that’s barely visible for a fraction of a second. The key prize is a “shout out” from the host, which is the internet equivalent of getting your face on the Jumbotron at a baseball game. Beyond that, you’re left with the simple joy of shouting anonymously in a crowded space.

Platforms like Facebook Live and Twitch (a streaming site specifically for gamers) often leverage the chat for interaction. The messages from viewers can actually guide the content. But HQ is different. Chat throws up dozens or even hundreds of guesses each time the host asks a question, but the responses are such a dense mixture of correct and incorrect answers, and just plain trolling, that it isn’t practically useful. It does, however, provide someone with the opportunity to toss up a message that hundreds of thousands of people may see with no real way to stop it.

As HQ begins to try and make money to fund those $1,000 (and climbing) paydays, we will see if advertisers feel optimistic about putting their messaging up against a cascading pile of memes and nonsense. Maybe we’ll see a shift to an emoji-only format so people can still share their emotions, without the risk for really, really gross comments. As HQ grows, so does the likelihood that we’ll see more of this “appointment gaming” type live contest, and we’ll see if the competitors find value in endless chat.