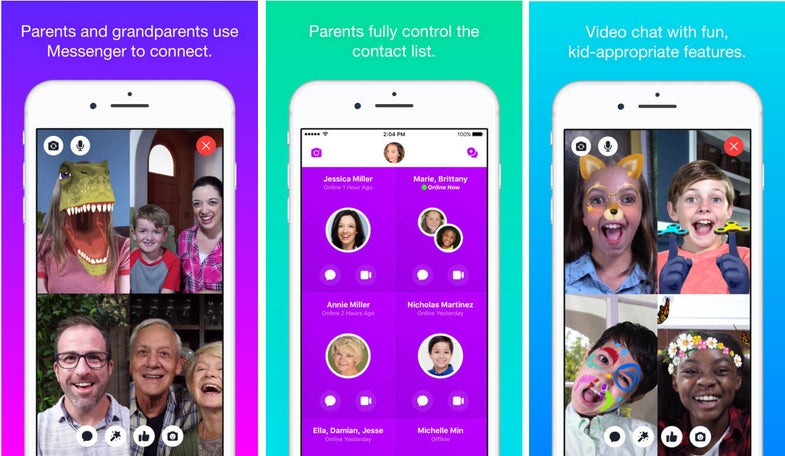 Earlier this week, I downloaded the new Facebook Messenger Kids app onto my daughter’s phone. The app is aimed at kids between 6 and 12 years old and offers a chat-based experience with none of the advertising or traditional social media elements of the full Facebook. My daughter is near the top of that age range, but I added her as a contact and she requested I let her connect with one of her friends. She spammed me with enough Facebook “stickers” and gifs that I considered blocking her. She could video chat and use face filters. It was pretty typical stuff when it comes to chatting with your kids.

But, this isn’t a standard app for kids. This is the internet behemoth that is Facebook. The second the app was announced, the internet rushed to point out how this is simply a gateway drug to get kids on the Facebook bandwagon that they can ride for the rest of their lives, spilling all their personal information and inviting a deluge from advertisers along the way. I even saw it compared to using cartoon characters to sell cigarettes to kids.

While I see the pitfalls of bringing a child into social media sphere—6 does seem extremely young—I do think Facebook has done some things right with its new app, and it has potential if used correctly. Is this worth panicking over? Should a second grader have access to this kind of app? I asked a few child psychology and development experts to find out.

Should kids be using social media at all?

Finding the right age to introduce kids to social media is more complicated than simply picking an age, like the Children’s Online Privacy Protection Rule (also known as COPPA) did, which went into effect back in 2000 and state that kids need to be 13 or older before they can start using most of the popular apps with advertising and data tracking. “We should protect kids from advertisers as much as possible,” says Yalda T. Uhls, UCLA adjunct assistant professor of psychology, senior researcher with the Children’s Digital Media Center. “But, it’s not entirely about age. It’s about letting the child and their community help decide when they should use it.”

In this case, the “but Dad, all my friends are using it!” argument can and should partially influence the decision about whether or not participation is appropriate. “If their entire friend group is communicating this way,” says Uhls, “it’s totally fine and actually healthy to guide the child on how to use it.”

During this on-boarding process, it’s important that the parent be involved and aware of how the app works and what real world usage would look like. As a parent, one of the things I like about Facebook’s Messenger Kids app is that the child can only communicate with contacts, and contacts have to be added with permission by the parent account. Kids can’t get messages from random people like on iMessage, Instagram, Snapchat, or any of the other common platforms kids currently use for chat.

“Giving parents control is likely to create contention,” says Heather Kirkorian, an associate professor of human development and family studies at the University of Wisconsin, Madison. “But, parental oversight is an important part of a healthy introduction to this kind of communication. Prohibiting social media can sometimes motivate kids to find unregulated channels which open them up to more risk.”

For many kids who have already usurped the COPPA restrictions and signed up for unrestricted apps, Facebook Messenger Kids will likely feel restrictive. But, as a first experience, the scaled down nature can be a boon. Kirkorian likened it to social media training wheels.

Uhls takes an opposite stance, however, suggesting that the limited nature might give kids a false sense of what life on the big social networks is really like. “A child needs to learn to be smart about what they post,” she says, “and not just because irresponsible behavior is blocked.”

Still, the totally closed nature of this Messenger Kids ecosystem does prevent embarrassing or harmful posts from lingering to haunt a user as they grow up. I can only imagine what life would be like if I had a Twitter account as a tween. Sometimes I barely feel responsible enough to have a public Twitter account now.

While the bulk of the security comes from the ability to curate a kid’s contact list, there are deeper security features the app itself offers. When a child reports content as inappropriate, for instance, the note goes to Facebook, but the parent also receives an alert.

You also can’t delete messages from the app, which is one of the more frustrating things to try and keep track of if a kid is using iMessage or most other chat apps for that matter.

These are features found in other kid-specific chat apps in the past, but this is another case where Facebook is leveraging its massive user base to implement features on a larger scale. It’s a sketchy thing to do from a business standpoint (just ask Snapchat), but it also makes life a lot easier than trying to convince your kid’s friends’ parents to download a specific—often paid—secure app so your kids can chat.

Facebook has removed advertising from the app completely, but the content children send is still tracked in some ways. Facebook has said in multiple statements already that it isn’t using that data for advertising purposes, but rather to “improve the app.”

If you know anything about Facebook, none of that should come as a surprise, but it’s still a valid concern and one parents should be aware of.

So, is it a gateway drug?

Facebook says that it will not automatically convert Messenger Kids accounts into full-fledged Facebook accounts once the child reaches the legal age of 13. But, this is an undeniable step toward locking the child into the social network’s architecture. After all, kids go where the other kids are.

And none of the safety features implemented here can account for the behavior of other kids. “It’s crucial to pay attention to the child’s behavior before, during, and after using the app,” says Kirkorian. “Any kind of behavioral change after using the app is a warning sign. You should talk to the child about how they’re feeling.”

Uhls recommends sitting down with the child and putting together a social media contract that outlines what is and isn’t appropriate behavior on social media to lay a strong foundation for future behavior. “It helps a child to see the rules clearly in advance,” she says.

So, am I a bad parent for using Facebook Messenger Kids?

I’m sure the internet comments will have a strong opinion, but for now, it looks like Facebook has done a lot of its homework for an app like this. The company claims to have a 100-member team on the product, which went through an 18-month development process and included input from prominent parent groups like the National PTA. And Facebook isn’t even the first of the big names to try and bring children into the social fold. YouTube Kids has been around since 2015 and there will only be more of it going forward unless something massive changes. But, for now, it is possible to get your young one into the social world without damaging them.

My daughter described the app as “fine.” She has already experienced some of the unfettered experience that comes with full-on apps, like Instagram, which she uses with supervision. She did like the feature that let her endlessly spam me with unicorn stickers and gifs. Only then did I question my decision making as a parent.