The First Robot Patent: A Teslapunk Nav System for Airships

On Oct. 20, 1936, the United States Patent and Trademark Office issued a patent to one Frederick A. Fowler for... 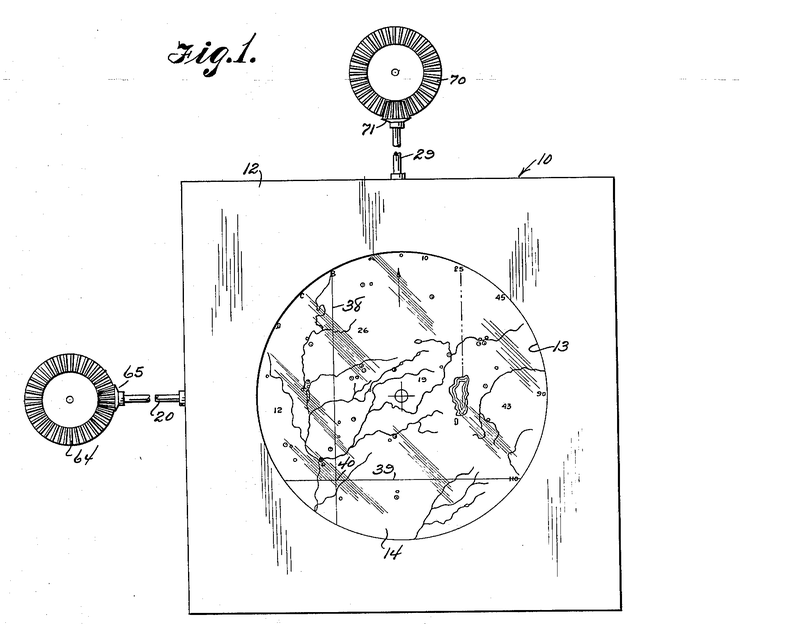 On Oct. 20, 1936, the United States Patent and Trademark Office issued a patent to one Frederick A. Fowler for a “robot navigator.”

Although Fowler was a sporadic patent-filer and inventor of no real regard, he deserves some credit—he scored the first patent in history containing the word “robot.” And if anyone had bothered to build it, his navigator would have been a sight to behold.

The hardware, as envisioned, wasn’t particularly arresting, and not at all anthropomorphic. See that image up there, of a map with stuff attached to its sides? That’s it. No blinking Edison bulbs for eyes, or clockwork monkey scuttling across navigational charts, making grease pencil marks with its protractor-embedded tail. This robot navigator is closer to a robot map, with crosshair wires that slide along its interior surface, updating its current position by triangulating incoming radio signals. It would have been backlit by lightbulbs, though. And it was intended primarily for airships, and other aircraft.

In other words, the first patented robot was an utterly adorable steampunk (or Teslapunk, if you’re a stickler) GPS navigation system.

Or it might have been, if the vast network of “so-called radio broadcasting or beacon stations sending out so-called selected waves or impulses” that Fowler mentions had been established to help pinpoint the real-time locations of the various airships he might have imagined soon clotting the skies. It was 1936 when the patent was issued, less than a year before the Hindenburg erupted in midair.

As for the use of the word “robot,” its accuracy is debatable. Only the most addled Luddite would describe Google Maps as robotic. But a lightbox with a crosshair element that’s triggered by sensor input, and that moves itself, by way of gears…

Even if Fowler’s navigator isn’t, it’s fitting that the first patented “robot” was intended for use in vehicles. It would be another 75 years before Google received its patent for a “mixed-mode autonomous vehicle,” but arguably the first patent for a robot by any other name—a “teleautomaton,” for example—went to Nikola Tesla in 1898, for his remote-controlled boat. From the moment robots seemed possible, we’ve looked for one way or another to relinquish control, and let someone else steer. Or check the map, as the case may be.