Alternative apps to help you ditch the Facebook ecosystem. 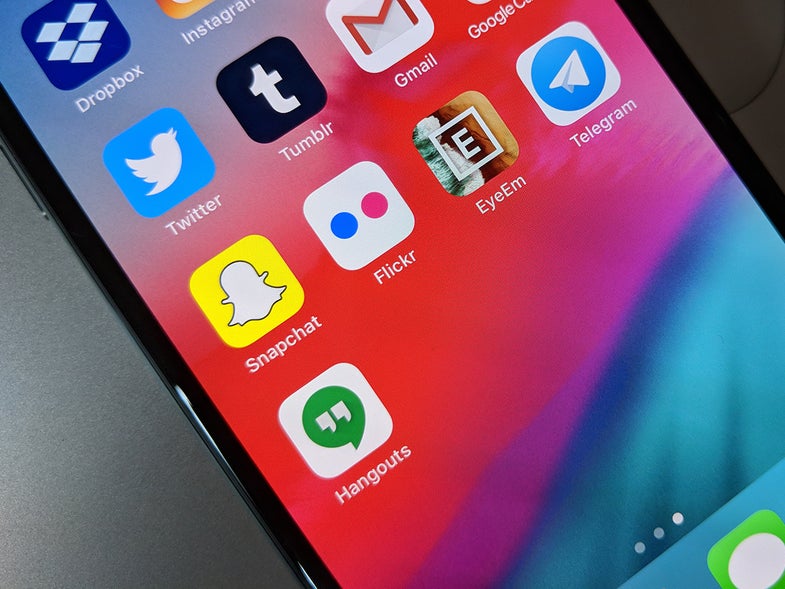 As Facebook lurches from privacy crisis to data breach and back, you might decide it’s time to jump ship. The problem is, deleting your account won’t be enough to escape Mark Zuckerberg’s empire. To protect your data, you’ll also have to disentangle yourself from other apps owned by Facebook.

Those apps include Instagram and WhatsApp, which Facebook acquired in, respectively, 2012 and 2014. Quitting all three services will release your data and social media activities from Facebook’s clutches.

Of course, ditching all of these apps will leave a hole in your social, photo-sharing, and chatting routines. So we rounded up a few alternatives that do pretty much the same thing. Just bear in mind that no app can perfectly replace all the features of Facebook and Instagram—if you want all their benefits, you’ll have to keep using them, which means accepting that the tech company will continue vacuuming up information about your interests and activities. 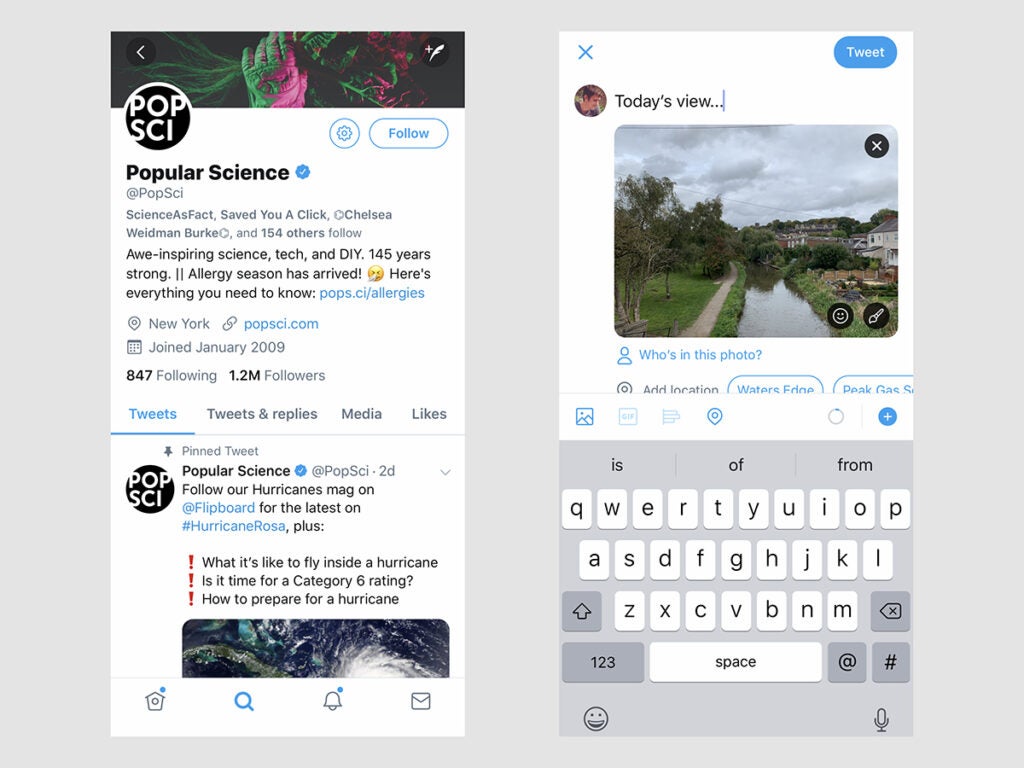 Twitter lets you connect with people through 280-character posts.

In many ways, Twitter and Facebook are different beasts. But the social networks do share a few traits. Both provide a constantly-updating stream of posts, photos, and videos, allowing you to see (or ignore) the latest news from friends, acquaintances, companies, and media outlets. For a more private connection, you can message contacts directly.

In addition to Twitter’s famous character limit (currently 280), the network is more open than Facebook—your tweets appear publicly by default (although you can tweak this setting). That means you need to post a bit more carefully to avoid sharing something you’ll regret later. However, that same openness makes it easier to find and follow interesting people and hashtags from all over the world. 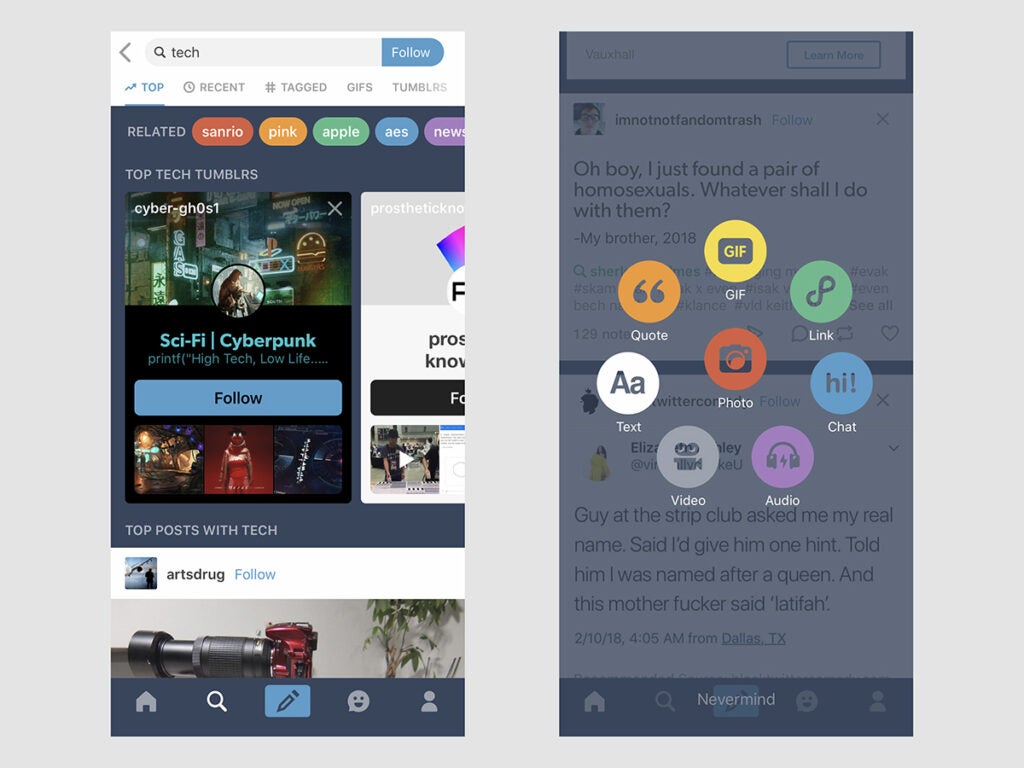 Tumblr once enjoyed a high level of popularity, but these days, it isn’t as widely used. Still, it provides an entertaining way of keeping in touch with friends, finding and sharing interesting content, and sending short direct messages to your contacts.

With Tumblr, you get your own public or private blog address where you can post images, videos, quotes, and plain text. Because it emphasizes visuals, you might think of it as a blend of Twitter and Instagram, with a quirky sense of humor all its own. You can enjoy that humor through a private dashboard where you scroll through all the posts from people you follow. For more specific content, you can search by topic or hashtag, and to share more easily, simply reblog posts from other users.

Tumblr is free for Android and iOS 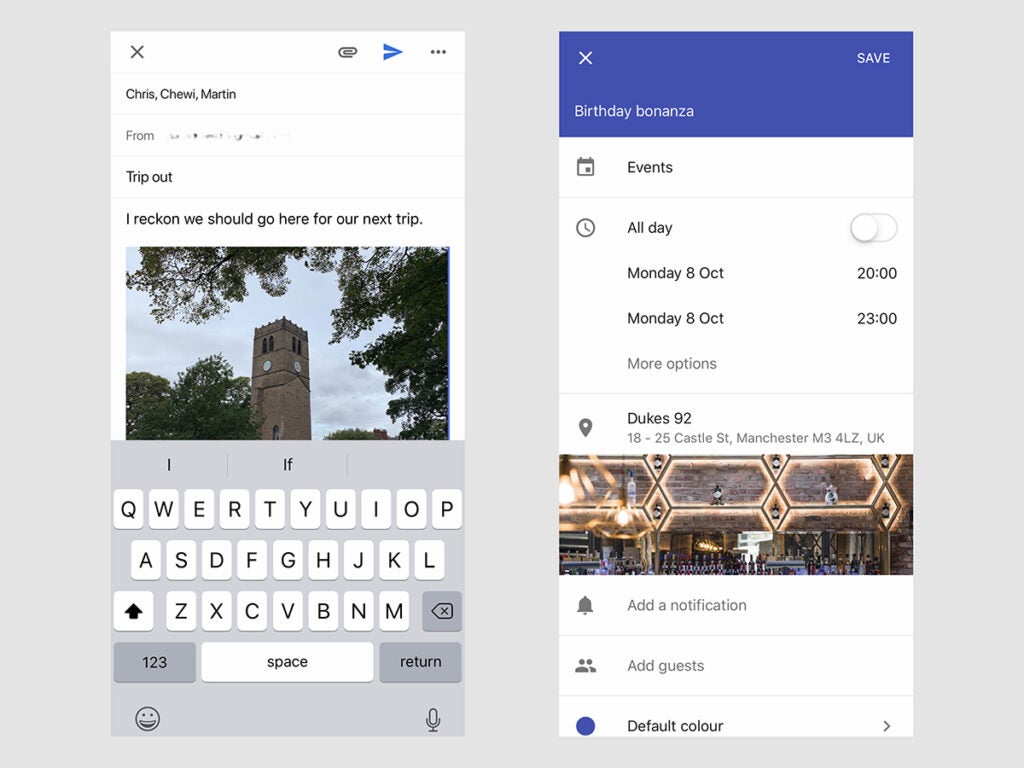 Neither Twitter nor Tumblr helps you chat with small groups and organize events the way Facebook does. That’s where Gmail and Google Calendar come in.

If you want to share news, photos, travel plans, and random memes with a specific set of friends, set up a group message in Gmail. This gives you a more exclusive way to stay in touch.

As for events, you can arrange those just as easily on Google Calendar. It lets you manage your guest list, message attendees, attach relevant files, tag the location, and receive automatic reminders. Best of all, it can help the planner find those perfect times when everyone on the guest list will be available.

Granted—TikTok is not an app for photos so it’s not a direct competitor to Instagram. However, in the last couple of years, one of Instagram’s most popular feature have been Stories, and this is where Chinese app acts like a great replacement.

The app is very versatile and has multiple filters and editing options that give users endless possibilities for posting. Also, unlike Instagram, your videos won’t expire after 24 hours, and will remain in your profile as long as you like them to. The other great difference between these two apps is that the gram’s audience is known to be much older than TikTok’s. But know that is changing with every passing day— more and more millennials are joining the social network, making the general feed (the For You page) much more diverse.

And sure, there have been some concerns about the platform’s privacy policy, but if you want to ditch Instagram and hang with some cool teens, this is where it’s at.

TikTok is free for Android and iOS. 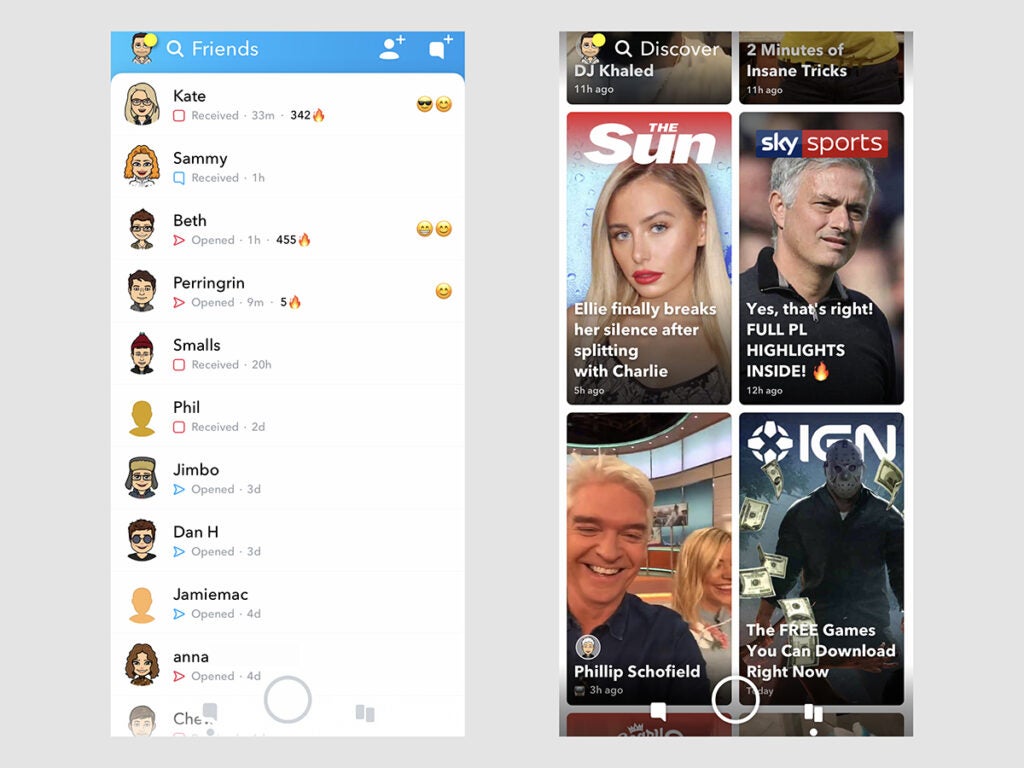 Instagram has copied so many features from Snapchat that it has made the photo-sharing apps extremely similar. Both offer lively effects and filters, one-on-one messaging, and Stories—collections of stills and videos—that disappear after 24 hours.

However, unlike Instagram, Snapchat does not include a permanent feed, because the app intends all of its content to be temporary. Depending on how you share photos, you might find this ephemerality annoying or a welcome relief. And Snapchat also provides a few extras that Instagram doesn’t, including the Snap Map, a feature that lets you follow your friends’ whereabouts and meet up with them more easily.

Snapchat is free for Android and iOS 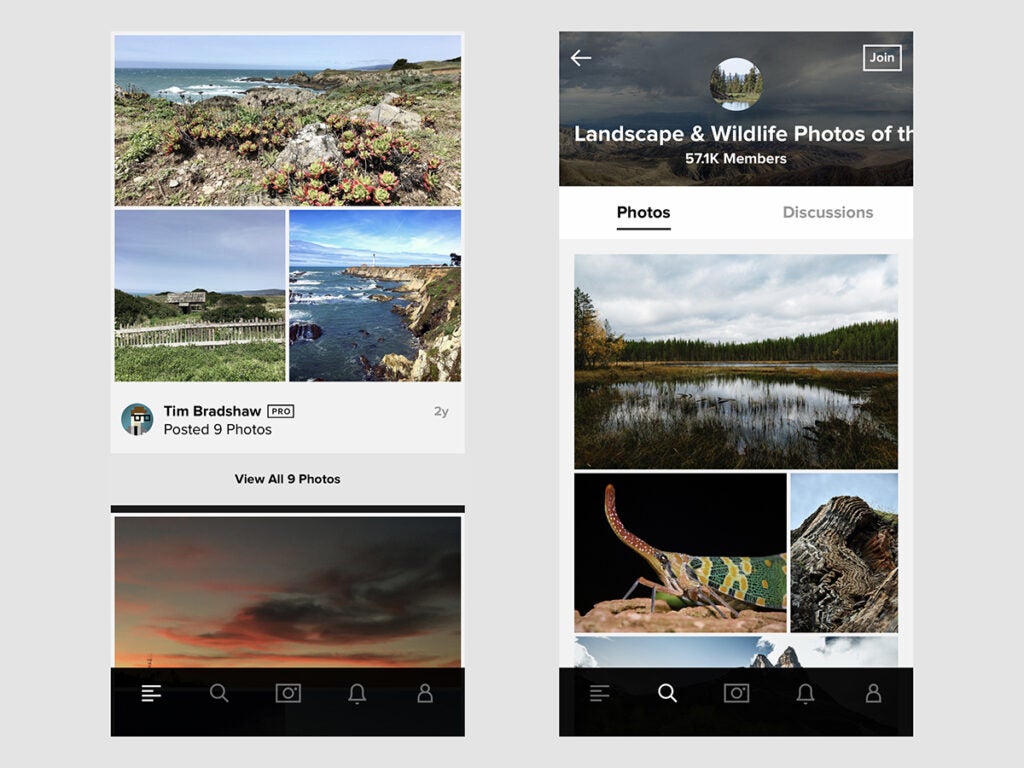 Flickr is perfect for sharing photos with a wider audience.

Although Flickr isn’t a social network per se, it gives you an excellent way to showcase your photos and videos where the wider world can easily find and view them. Like Instagram, the mobile app lets you apply a selection of neat filters to your pictures, and you can also label each image or video clip with captions, tags, and comments.

As a bonus, Flickr gives you far more control over which pictures are public and which private—and what people can do with them. For example, to help others use your work while giving you credit, you can easily choose a Creative Commons license for your pieces. To explore the work of others, use the app to browse collections of public photos based on location or topic. 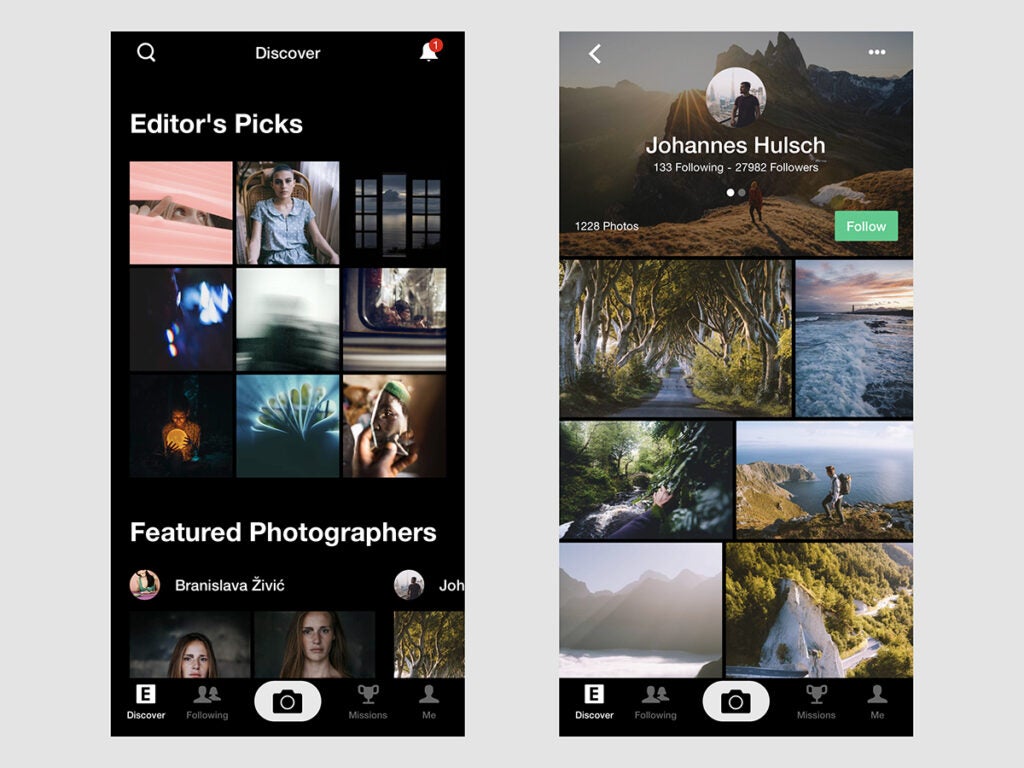 The EyeEm community, like the Instagram one, focuses on inspiration and quality shots rather than blurry photos of your sloppy breakfast. As on the more famous photo-sharing network, you can follow friends or complete strangers, and they in turn can follow you.

However, while celebrities and brands rule Instagram, EyeEm gears itself more toward showing you new photographers. Head to the Discovery screen for selected images—you can view photos snapped near you or popular visuals picked out by EyeEm members.

EyeEm is free for Android and iOS 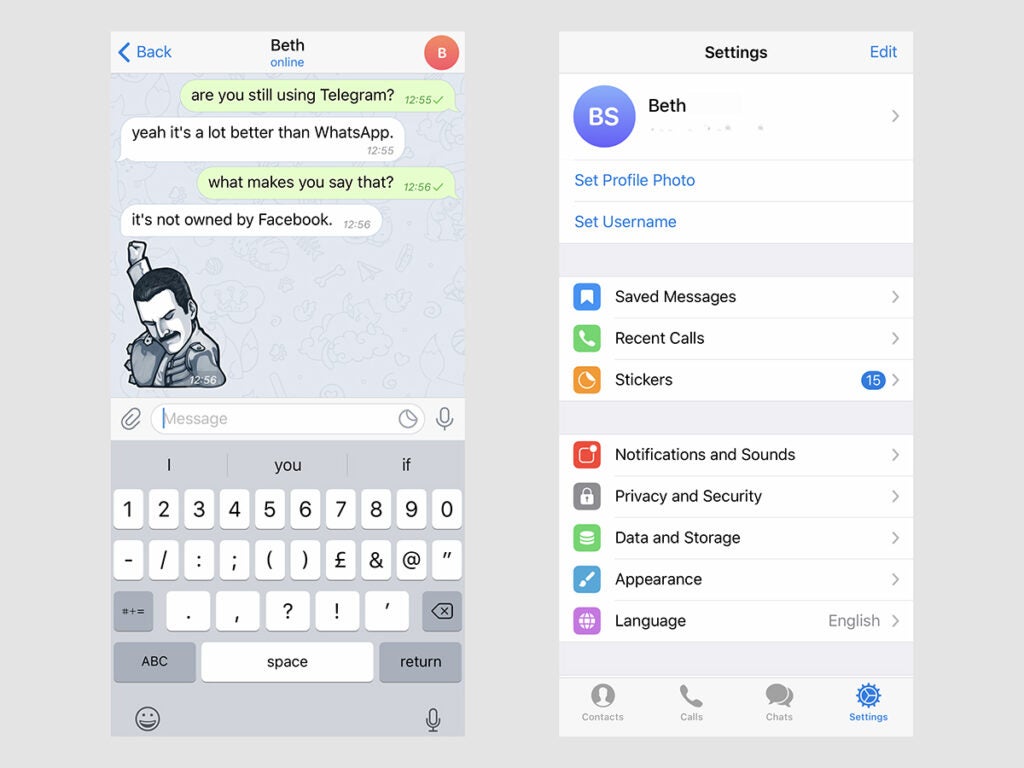 WhatsApp’s default end-to-end encryption is a big selling point for the app. Telegram matches that particular feature, as well as many others: group chats, photo and file sharing, read receipts, and the ability to access your account via a web browser. In fact, it delivers just about everything you might want—except for a video calling function.

Telegram also has a feature that WhatsApp can’t match, at least at the moment. Through its Secret Chats function, the app can automatically erase your messages from a thread once your conversational partner reads them.

Telegram is free for Android and iOS 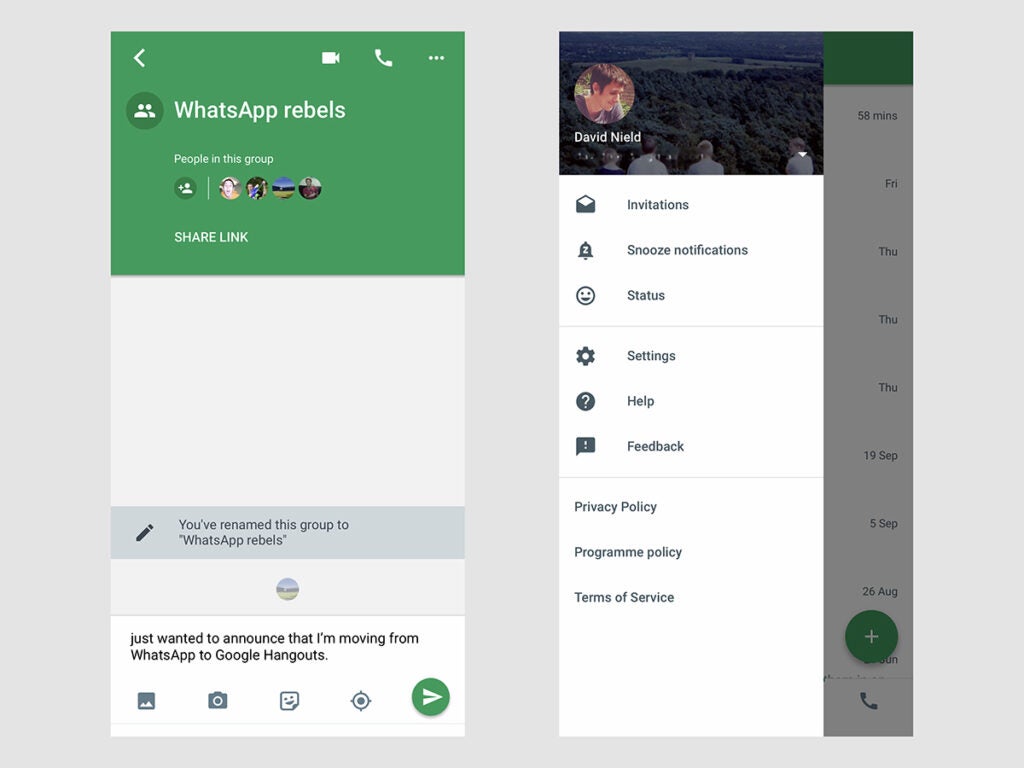 Google Hangouts can match most of WhatsApp’s features.

Google hasn’t given Hangouts much love in recent years, but it remains an excellent way of keeping in touch. From photo sharing to integrated GIF support, it has all of the standard instant messenger functions that WhatsApp provides.

However, Google only encrypts your chats while messages are in transit, which means the company can theoretically tap into your conversation (though it promises not to). If you can live with that, then Hangouts is a great choice for one-on-one, group, and video chats. 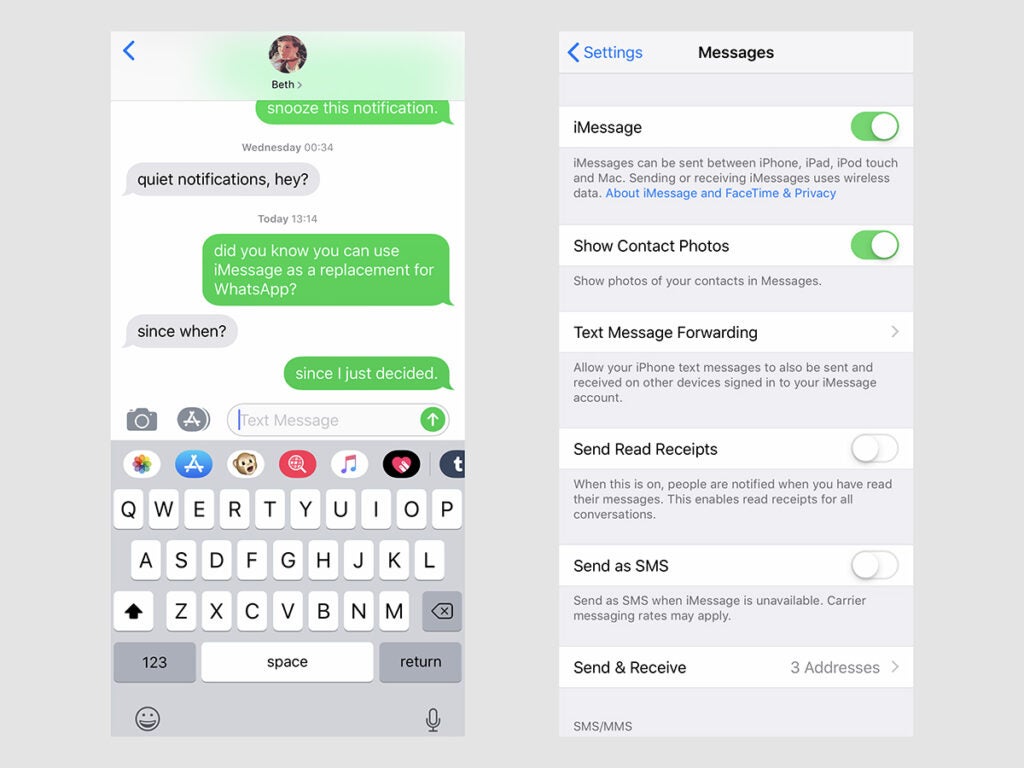 If you own an iPhone, you’re probably familiar with iMessage. Over on Android, your default text app is called Messages.

The iMessage app built into iOS (and macOS) shares a lot of features with WhatsApp, including end-to-end encryption, group chat support, and file sharing features. If you factor in Apple’s companion FaceTime app, you’ll have video calling capabilities as well.

Over on Android devices, users can take part in iMessage chats via the built-in SMS app. Meanwhile, the default text app on Android, called Messages, has received a steady stream of WhatsApp-like features over time. Most recently, it gained better support for sharing photos and GIFs, and added a web browser interface to the app.