Twitter is killing its terrible Mac app. Here are your options for replacing it.

Find the best way to use Twitter from your Mac. 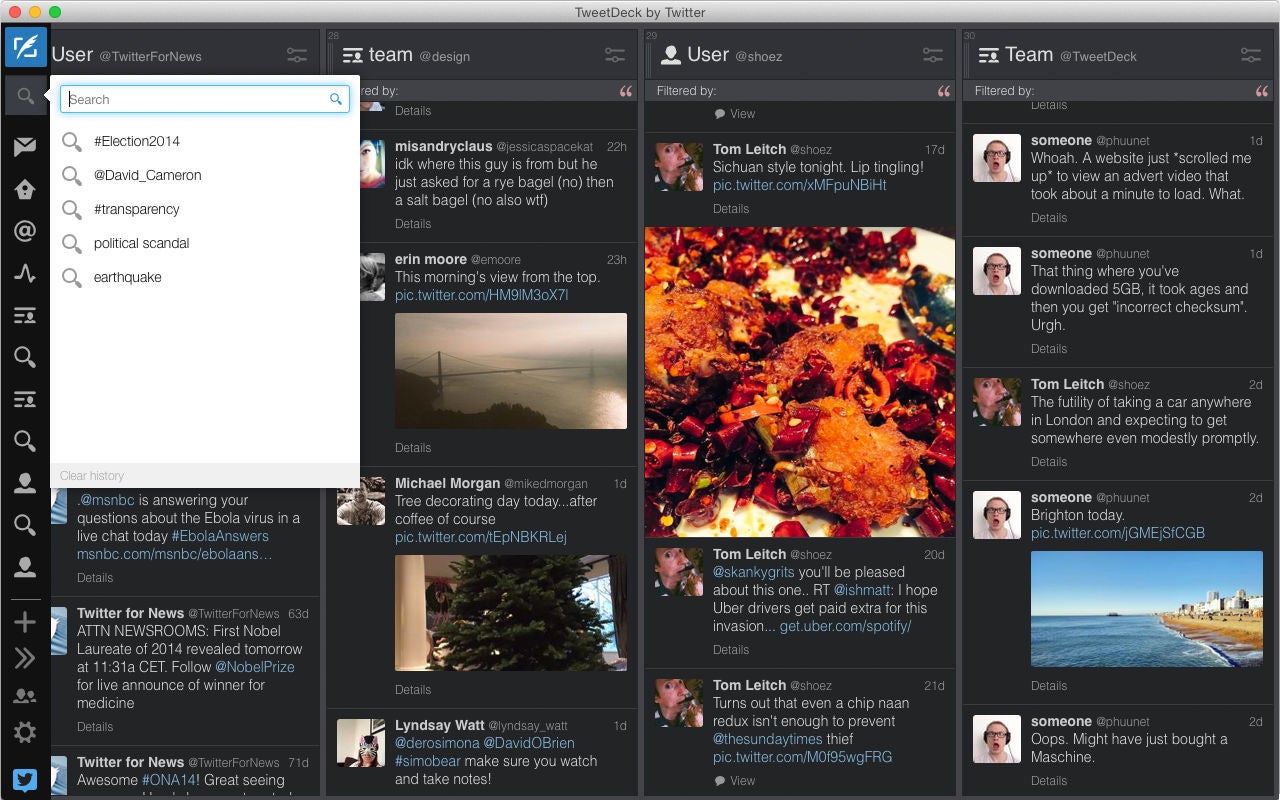 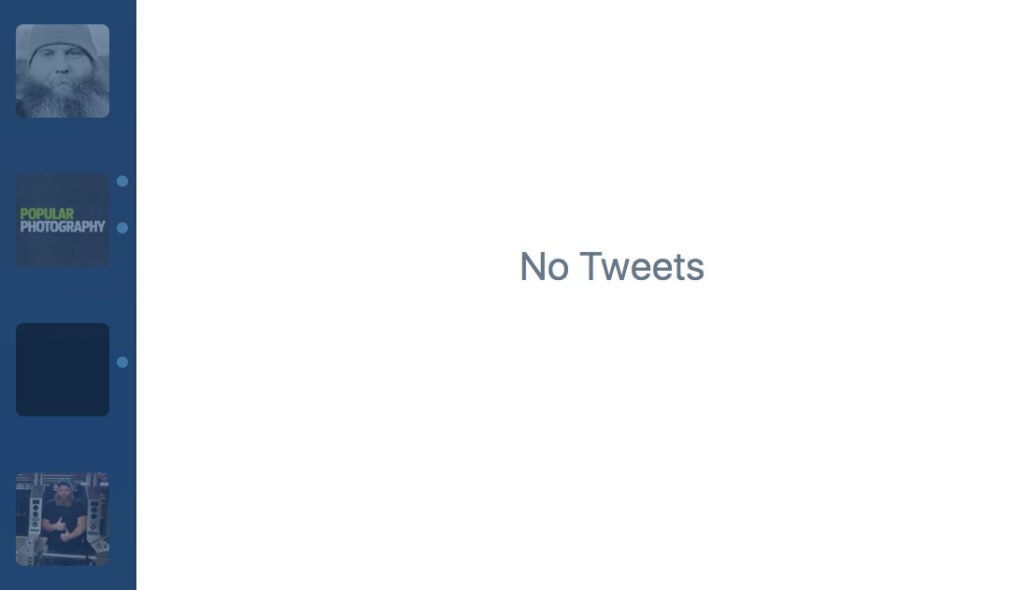 Twitter will no longer support the Mac app after March 18th.

I have been using Twitter’s terrible Mac app since I bought my first MacBook Pro back in 2011. In that time, it has regularly crashed, soaked up my computer’s resources, sent me sporadic notifications, and generally sucked. Despite its many shortcomings, the Twitter for Mac app has been my window into the roiling, chaotic sea of the internet. On March 18, however, that window will officially close when Twitter will revoke its support. I will miss it deeply, and unironically.

This leaves me, and others like me, in a quandary. How are we supposed to keep up with the endless stream of questionable political opinions, nonsensical jokes, and the very occasional redeeming bit of cultural miscellany now? I have spent the last couple weeks trying out a few alternative ways to interact with Twitter, taking suggestions from social media experts, Twitter itself, and a collection of how-to articles of varying quality on the subject.

If you’re in a similar situation, here are your options as well as some of my impressions.

We're focusing our efforts on a great Twitter experience that's consistent across platforms. So, starting today the Twitter for Mac app will no longer be available for download, and in 30 days will no longer be supported.

Use the Twitter.com web page

This is Twitter’s official suggestion for navigating around the service, so this is what I tried first. I immediately hit a roadblock in how difficult it is to manage multiple accounts at once through a browser. Between my personal accounts, work accounts, and joke accounts where I pretend to be sarcastic inanimate objects, logging in and out it takes up a lot of time.

The web also doesn’t scroll tweets into your stream in real time. It builds up a huge stockpile of updates under a “See new Tweets” button and then unfurls them like a medieval scroll filled with pictures of my friends’ lunches and news about smartphones. That saves computing and connection resources, but the format defers the instant gratification that the Mac app offered with its constant waterfall of content.

There are some advantages to the browser approach. It’s much more reliable than the app and it shows me all kinds of information on the same page rather than different tabs. I no longer have to switch tabs to see the collection of random strangers Twitter thinks I should follow for some reason.

My main complaint, however, is how easy it is to lose track of the tab in which Twitter now lives. I’m probably worse than most when it comes to keeping too many tabs open, but at the end of each day, I’d find myself closing half-a-dozen Twitter windows because it was easier to open a new one than find the other.

It’s ultimately a fine option if you’re a basic user or someone with far better organizational skills than my own. 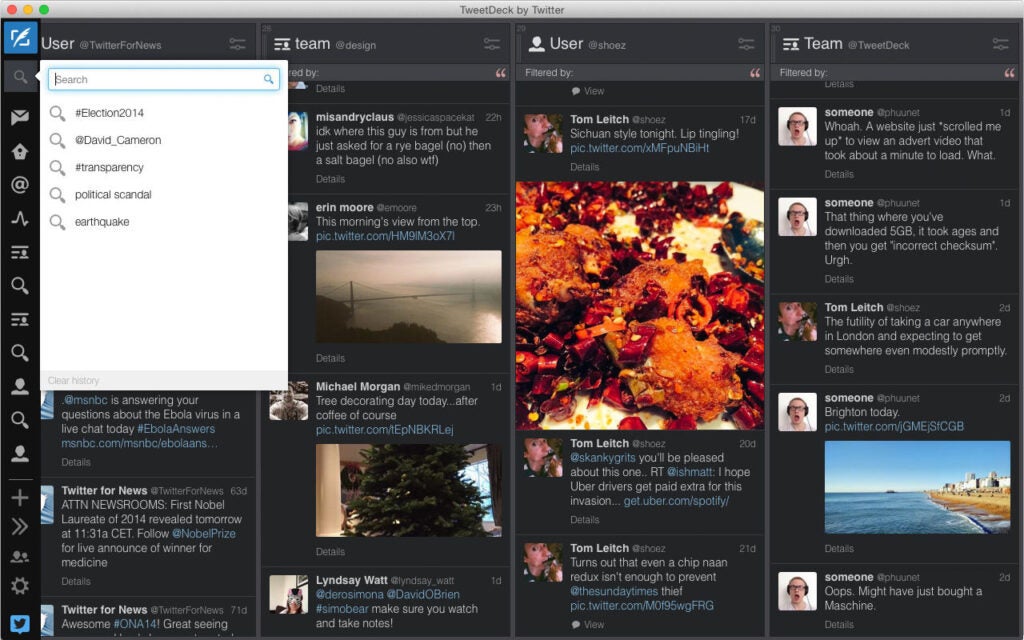 Twitter bought TweetDeck in 2011, but the functionality has remained relatively stagnant since then.

I have used Tweet Deck in the past and it has a lot going for it. It’s easy to manage multiple accounts, even if you regularly do things like scheduling posts. You can customize the columns containing specific types of content you see whenever you navigate to the TweetDeck window, and you’d be hard-pressed to find something that can cram so much social media information all on one page.

But, while that’s one of its strengths, it might also be its biggest weakness. To look at a TweetDeck page is to stare down a giant wall of text, Twitter names, and some small photos and videos. Look at it quickly and you’d swear it’s homework.

This is a great option if you use Twitter professionally, or you want something that looks really tedious and intimidating so you can keep it on your computer at your job and people might think you’re doing actual work when they pass by and spy on your monitor.

Expect regular pokes to prod you into a paid account.

If Twitter is just a small part of your social media ambitions, then you’ll probably appreciate Hootsuite’s ability to manage accounts from a variety of networks like YouTube, Facebook, Instagram, and even LinkedIn. The interface uses a series of columns a lot like TweetDeck, only there are even more options to look at, choose from, and often ignore.

If you sign up for a free account, you can control up to three different platforms, but if you want more than that, you’ll have to move up to a professional plan, which allows for 10. It has a lot of useful advanced features, like a “composer” module, which allows you to preview what your finished posts will look once they’re published.

There’s no doubt that moving to Hootsuite adds utility, but it also loses all of the simplicity in the Twitter for Mac app. It’s like comparing the bare-bones dashboard of a classic car with the screen-laden cockpit of a modern electric car, like the one Elon Musk shot into space. 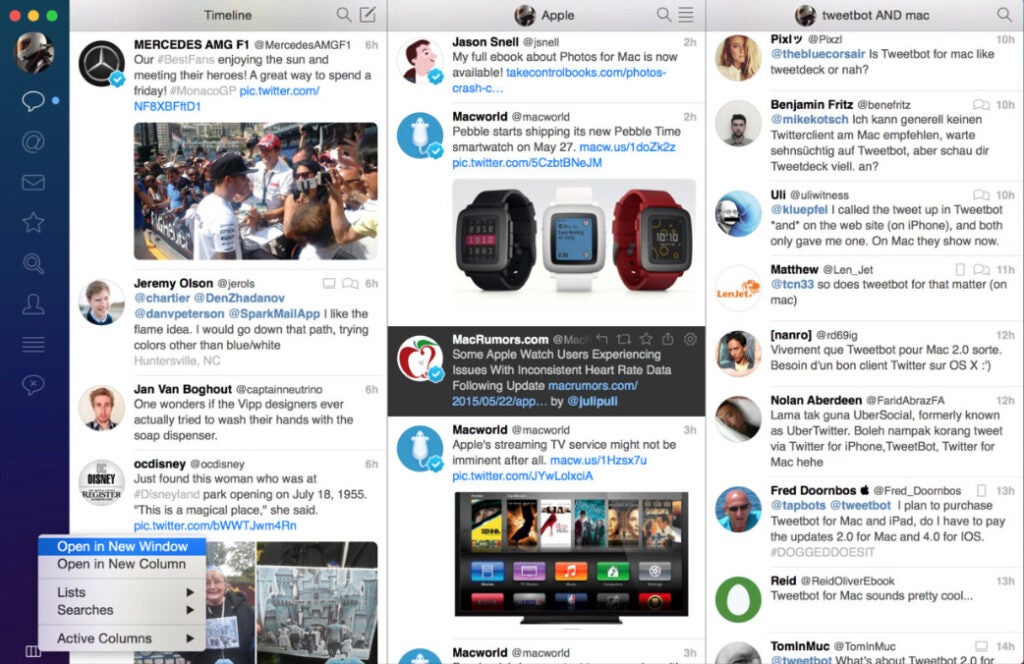 Expect to shell out $10 if you want to use Tweetbot for your Twitter shenanigans.

Unlike Hootsuite, Tweetbot is a stand-alone app that you can buy from the App Store. The first downside is that it costs $10 to get the desktop app. That’s not a lot of money, but a big part of Twitter’s appeal is that it’s a free way to shout every single opinion and thought you have at everyone willing to listen. If you want the mobile version of Tweetbot, it’s going to cost you another $5.

Once you get past the initial cost, Tweetbot has a lot going for it. It has been around since 2012, and it gets regular updates, which is a good sign for its longevity. You can manage multiple accounts and there’s no hard-sell to try and get you to upgrade to a more advanced account, since you already paid for the software.

The interface is very reminiscent of Twitter for Mac, which is one of its biggest strengths as far as I’m concerned. You can set it up to look like a simple stream in a single column with icons on the left hand side for navigating between sections.

The real downside here is that it almost feels like paying $15 total for an experience I already had.

Twitterific is slightly cheaper at $8 from the App Store.

Twitterrific 5 At $7.99, this stand-alone app is slightly cheaper than Tweetbot, especially when you consider that the Twitterrific mobile version is free.

The interface has some intuitive features that make it easier to understand at a glance, which includes the ability to switch between light and dark backgrounds depending on the time of day. It’s really easy to mute words, people, or hashtags as well, which is an increasingly important part of using Twitter in 2018 without losing your mind.

It’s not all twitterrific, though. The stream previews images and media in cropped versions, so you have to click through in order to see the whole picture or video, whereas Tweetbot shows you the whole thing within its interface. If you like tracking your activity throughout the day, the mobile app has a handy view called Today view, which the desktop version lacks.

Overall, it’s reliable, versatile and easy to use.

Once Twitter for Mac ceases operating, I have decided to make Twitter a smartphone-only activity. The temptation to open a desktop version is strong, but I have a feeling it will wane down the road. In the short experiments I’ve done, relegating Twitter time to my mobile devices provides far fewer distractions and applies a lot more productive guilt—when I’m working, staring at my phone still feels a little wrong.

The app is everything I originally loved about Twitter in the first place. The updates scroll automatically and the single column allows me to concentrate on post without lots of stuff to distract me. Twitter feels like a treat now—like a box of little (sometimes angry) presents I get to unwrap at various points during the day. It’s no longer just another box on my desktop for me to do work on.

If you’re currently using a desktop client, view this as an opportunity to try a smartphone-only Twitter lifestyle.