You can use aluminum foil to strengthen your Wi-Fi signal

But we don't 100 percent think you actually need to do this. 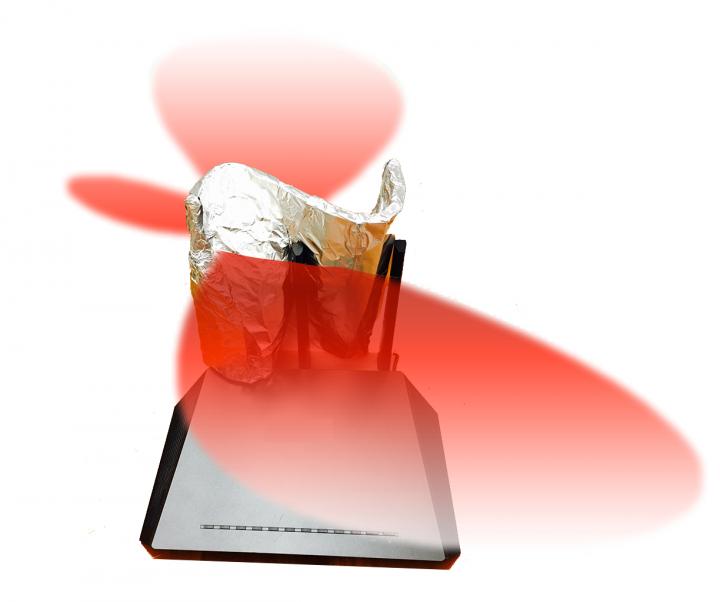 Wi-Fi signals are ubiquitous, but even though they’re invisible to us, the materials they interact with still affect them. These electromagnetic waves can travel through wood, glass, or concrete, but not water, so—pro tip—don’t put a fish tank in front of your router. Then there’s metal: it reflects the waves, a fact you can even take advantage of to shape the Wi-Fi signal in your home.

That’s the key point behind research from Dartmouth College that describes a way to fashion a 3D-printed reflector you can place near your router’s antennas. The reflector needs to be covered with aluminum foil, and if designed and positioned correctly, it can amplify the signal in the direction in which you want it to be strong, and diminish it in others (like towards a neighbor’s apartment).

“The idea is really based on the reflection of Wi-Fi signals,” says Xia Zhou, an assistant professor of computer science at Dartmouth, and the senior scientist behind the new research. Their algorithm lets them fashion a curvy reflector to tailor the Wi-Fi signal for different environments. “For instance, if you want stronger signals in the study room, or weaker signals in the restroom,” Zhou says, with a chuckle.

Think of it like a reflector behind a flashlight bulb, concentrating the beam where you want it to go. Metals like aluminum, copper, and silver all do the job. Zhou says they did their tests with a Netgear R700 router, and that the method works on both frequencies that a typical two-band router emits: 2.4 GHz and 5 GHz. (Theoretically, it should work better as the frequency increases and the wavelengths shorten.)

Ultimately, Zou says she hopes this research will help “lower the barrier” so that everyday people can control how their Wi-Fi blankets their home. After all, routers—those devices that emit that unseeable signal our devices are all thirsty for—are somewhat mysterious to most of us. You can learn more about their research here or check out a recent paper they authored.

Experts say the technique basically should work. The idea “makes perfect sense” in principle, says Swarun Kumar, an assistant professor of electrical and computer engineering at Carnegie Mellon University, noting that like light, Wi-Fi signals are reflected by metals. And Eric Siu, a senior product development manager at Linksys, who focuses on wireless routers, agrees. “In general, it does sort of work,” he says.

The antennas you see on routers tend to be omnidirectional, Siu says, so their waves go out in all directions. And if you want to visualize that signal, imagine a donut. The signal shape has holes towards the top and bottom of the antenna, but radiates out from the sides. A metal filing cabinet next to a router will reflect those waves, and mirrors can cause problems, too.

But Siu is reluctant to tell people to actually fashion their own aluminum foil Wi-Fi enhancers. “I can’t really advise people to use tinfoil or any sort of reflector, mainly for regulatory reasons,” he says. “In the U.S., the FCC actually governs the output power, so they have limitations as to what’s the maximum power level your wireless router can radiate a signal in any particular direction.”

In other words: tinker at your own risk. And feel free to put on a tinfoil hat while you’re at it, just for fun.