Wildfires are burning across the country—here’s how to prepare

Only YOU can protect your home from a wildfire. 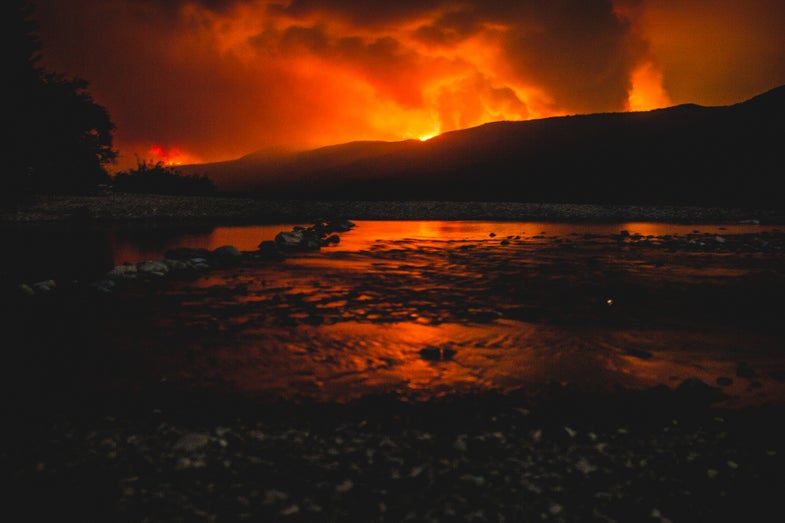 The sky in San Francisco turned a choking yellow-orange this weekend, as smoke from wildfires in northern California spread.

Currently, the National Interagency Fire Center is reporting 53 active large wildland fires that have burned 648,164 acres, mostly across the Western United States. Eighteen fires are now burning across Alaska, while California and New Mexico each have seven, Utah and Colorado each have six, Oregon has three, Texas has two, and Florida, Nevada, Washington and Wyoming each have one.

And that’s just the United States. Last week fires raged across Saddleworth Moor in the United Kingdom, near Manchester.

As human communities around the world continue to grow, more people are living in fire-prone areas, like New Jersey’s Pine Barrens. Rising temperatures and changing weather patterns are also expanding the range across which fires can rage, including Alaska’s usually chilly interior.

If your community is touched by fire this year, will you know how to prepare—or what to do once the flames arrive? Here are some resources to get you started.

If a wildfire is burning nearby

Both Ready.gov and the Red Cross have excellent resources that can walk you through what do do before, during, and after a wildfire passes through.

The most important thing is to listen to local authorities and be ready to go at a moment’s notice.

Make sure your family knows what the plan is in case a fire comes near your home, and be ready to evacuate when told to. Also make sure that your emergency kit is up to date and any important papers are in a safe and easy-to access place.

Smoke is a particular concern, and you want to make sure you’ve got the right mask. Skip the surgical and paper masks and look for ones labelled N95, which are designed to keep particles (like those in smoke) out of your lungs. Your local hardware store should carry them.

“Know that under conditions of mandatory evacuation, you will encounter traffic, frightening conditions, highly limited visibility due to smoke, etc., so being ready and leaving early is really important,” says Sabrina Drill, the Natural Resources Advisor for UC Cooperative Extension in Los Angeles and Ventura Counties. Cooperative extensions are a great place to get local information about how to prepare for wildfires in your particular area of the country.

Evacuate swiftly, but prepare your home for the fire’s arrival if you have time to do so.

“Before evacuating, either under mandatory of voluntary orders, it’s important to do some last minute things, like moving flammable garden furniture and wood piles away from structures, and taking down shade cloths or awnings that could trap embers, and making sure doors and windows are closed,” Drill says. “In addition, you want to make sure valuables are packed and ready to go, that you have a plan for pets and livestock, and copies of important documents. One thing I would not advise is either leaving sprinklers running, or hoping that automatic sprinklers will save a structure, as power may be cut, water lines can melt, and the water and water pressure may be needed by firefighters elsewhere.”

Preparing for a wildfire

The heat of summer often feels like wildfire season, but temperature isn’t the only factor involved in raising the risk. Drill points out that the largest fire in California’s modern history, the Thomas fire, happened in December.

“While heat certainly contributes to fire danger, it’s more about when the driest times occur, and when winds pick up. Interestingly, the largest fires often occur the year after drought conditions, when one year of decent rainfall “releases” seeds to germinate that had been dormant at the driest times, so that you get a lot of plant growth even though the water table is still low,” Drill says.

If there aren’t fires in your area, but it’s dry, there are steps you can take to reduce the risk to your home. You want to make it hard for any embers to enter your house—make sure that your roofing is fire resistant, cover holes and vents to keep sparks from flying in, and consider upgrading to double-paned, tempered glass windows. Drill recommends the wildfire resources on DisasterSafety.org as a starting place for homeowners concerned about their property.

Drill often advises people and communities about how to make their homes and yards more resilient to fire. She recommends making sure that there are no flammable materials within five feet of the home—yep, that includes woody plants and mulches in addition to wicker furniture, propane tanks, and leaves. “From five to 30 feet from the home, plants should be well spaced and kept neatly trimmed, removing any dead material,” Drill says. But there’s a caveat to keep in mind before you head out to clean up your yard.

“Now is NOT the time to use power tools,” Drill says. “Many fires have been started by a spark from a chainsaw from someone trying to clean up their landscape on a windy day—hand tools are best.”

Don’t be part of the problem

As a species, we’re pretty great at starting fires. According to the National Park Service, up to 90 percent of wildland fires are caused by humans. Sometimes it’s deliberate arson, sometimes it’s a stray ember from a cigarette or campfire, sometimes it’s a spark from a faulty car—or people trying to clean up their homes using power tools.

Whenever there are drought conditions, take care that you’re being fire safe. Especially this week, when there’s a whole lot of temptation to play with fire, whether it’s grilling the perfect steak or setting off fireworks.

As the National Interagency Fire Center notes on their website: “Wildfire danger is high this 4th of July throughout the drought-stricken West. Please be safe and follow fireworks laws or it could cost you a hefty fine. Wildfires ignited by fireworks cause serious injuries and property loss every year. Do your part. One less spark means one less wildfire.”