These sea creatures shine bright because of some nifty light-producing genes. 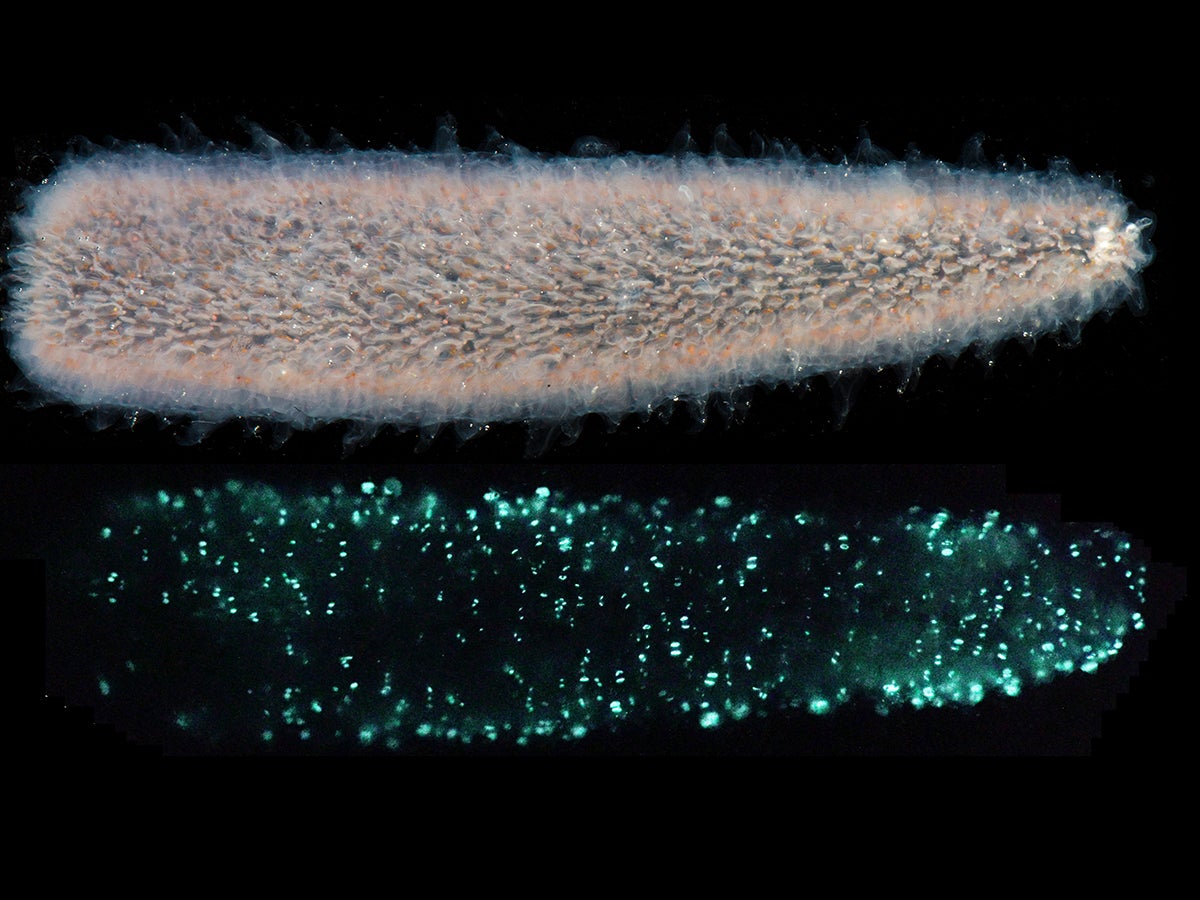 Scientists have known that sea pickles have special cells called photosites, located as spots around their bodies, that allow them to glow. But the species is hard to study. Credit: David Gruber
SHARE

David Gruber was on the southeast shores of Brazil when the ocean started glowing. He was testing out a squishy robotic hand that was attached to his submarine with the help of two colleagues when a colony of sea pickles swam by shining in their characteristic blue light. “They were fascinating,” says Gruber, a biology professor at Baruch College. The “alien-like creatures”, as he described them, created a long, tubular structure that moved through the water as a single organism.

Gruber and his team gently captured seven sea pickles using the soft robotic hand. Once back at the lab, they placed them in a darkened aquarium. To study them further, and to create the image above, they stimulated the animals—either by moving them or taking flash digital photographs—to make them glow and snapped the shots and videos with a Sony A7s II camera. Then, they got to work looking at the animals’ genetic code, trying to figure out which gene was responsible for their glow (They also studied animals collected in July of 2017 off Vancouver Island, in one of the biggest blooms ever recorded.)

The team published their findings earlier this week in the journal Scientific Reports, in what the researchers think is the first described instance of a bioluminescent gene in chordates, animals that have a cartilaginous skeletal rod supporting their bodies at some stage of their lives.

“This paper begins to uncover some of the mystery behind bioluminescence in chordates,” says biologist Rene Martin, a Ph.D. candidate at the University of Kansas who wasn’t involved in the study. Most of the things we know about bioluminescence in animals come from studying non-chordate creatures like jellyfishes or plankton. Chordates that can glow are hard to study. They are often hidden in the deep ocean and rarely come up to the surface. Whenever they do, they astonish those who get to see them. Sea pickles, for example, captivated a surgeon named Thomas Henry Huxley in 1851, who described the animals as “miniature pillars of fire gleaming out of the dark sea” while onboard the corvette HMS Rattlesnake.

Scientists have known that sea pickles have special cells called photosites, located as spots around their bodies, that allow them to glow. These cells contain genes called luciferases

that instruct the creatures to start a chemical reaction that stimulates a molecule called luciferin. This molecule releases light when the animal is disturbed.

Finding the bioluminescent gene is an arduous task, explains Gruber. After sequencing the animals’ DNA, they found several genes that looked like they could be a luciferase. They selected one of the most promising and created a synthetic replica. When they tested the gene, by making it interact with luciferin, the team got the spark they were looking for.

It is exciting that the researchers found a gene associated with bioluminescence, said the University of Kansas’ Martin in an email to Popular Science. Until now, the glow in other chordate animals had been explained by their diet or from a symbiotic relationship with glowing bacteria. This study found a gene similar to the one in animals like jellyfish, which could mean that animals using bioluminescence could have a common ancestor.

“For hundreds of years, humans have encountered these strange animals that can make their own light like a firefly. We know why and how some of them do it, but for some others it’s very hard to know,” Gruber says. “Over a hundred years, different scientists have studied this animal. It just feels cool to be part of this debate that has been ongoing for this long and to add another piece of information to it.”