Making A Gadget Sweatproof Is Much Harder Than Waterproofing

The sweat-immune Jaybird X3 remind us

Waterproofing is one thing. It's another thing to make headphones sweatproof. Courtesy Key and Peele
SHARE

The Jaybird X3 headphones are the latest workout earbuds from the company of the very same name. The earphones are bluetooth and TKTK and corded, so you won’t lose only one like Apple’s AirPods. But more interesting than any of that is a casually-mentioned bullet point on the back of the X3’s box: Jaybird’s X3 headphones are sweatproof. Which isn’t as easy as making something waterproof.

This is the second time Jaybird has made a product that’s immune to sweat. Which the company notes requires a much different set of trials than simply making sure moisture can’t seep into the device.

Jaybird General Manager Rory Dooley likens it to the difference between freshwater and saltwater. “Unlike freshwater, saltwater has a corrosive effect. Actual sweat is even worse than salt because it can be highly acidic.” The TKTK and TKTK inside sweat doesn’t mesh well with the internals of a modern day headphone. Combine this with potential lotions or dirt on your skin that may transfer over into your sweat and there becomes much more to account for than when your phone tumbles into a puddle or you drop it in some (hopefully clean) toilet bowl water.

In addition to the corrosive properties of sweat, Dooley points out the death-by-a-thousand-cuts nature of sweat. “If one sweat bead is able to fall in, you’re open to 1,000 eventually breaking through.” Then there’s the matter of how long it takes to get to 1,000–different people perspire different amounts. A sweatproof gadget also needs to hold up against the light sweat of a quick bike ride and the heavy sweat produced after a marathon treadmill session. The makeup of each person’s sweat also varies: sweat belonging to you may be less harmful than what I my perspiration. A device declared sweatproof has to be invincible to all of this.

More consistent, however, is how often most people clean their headphones. When you drop your smartphone in water or get sweat on it (after talking on the phone, say), odds are you’ll wipe it down immediately. The same is likely untrue for your exercise headphones, that many lump into the workout gear category. Says Dooley, “When people are using it for running, for example, they are literally sweating all over it for long periods of time. And then throwing it aside until the next time.” 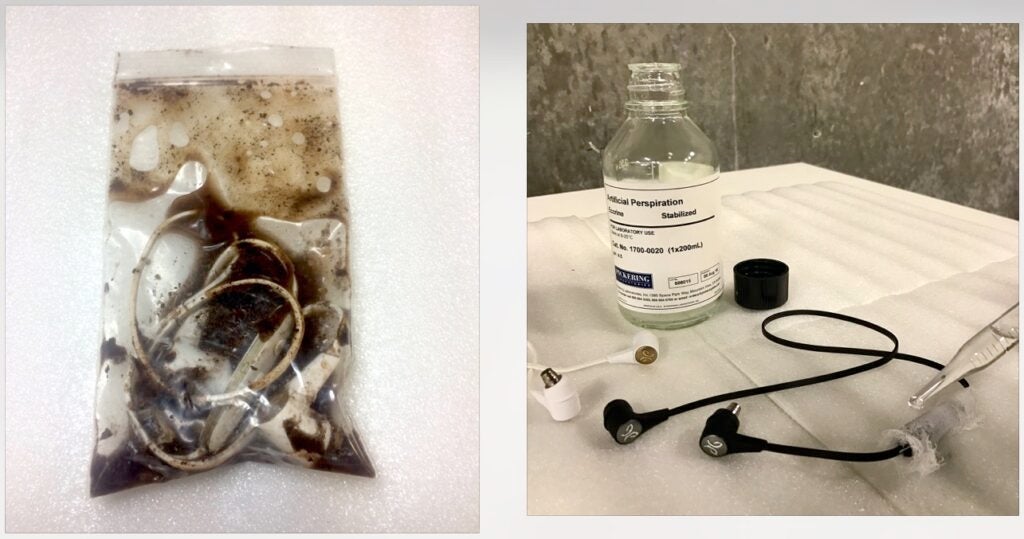 Making sure the Jaybird X3’s can withstand all the sweat, dirt and bodily excretions that come with working out

Making a device water resistant requires simpler tests, as ratings are more concerned with more easily measurable aspects like water pressure. The iPhone 7 is rated IP67, for example, meaning it can survive one meter of water for 30 minutes. Sweat resistance takes into account how you’ll use the device over the course of its lifetime, so the folks at Jaybird and other companies need to get those thousands of drips of sweat into the earbuds at an accelerated rate.

For the Jaybird X3’s, the company fills a resealable bag with sweat, dirt and lotion and the earbuds to simulate real-world wear-and-tear. In addition, Jaybird douses a strip of gauze pads with special order artificial perspiration from Pickering Labs. Known as Eccrine sweat, the solution resembles the averafge adult human’s sweat–comprised of 19 amino acids, seven minerals and four metabolites. Jaybird wraps the gauze around the device’s charging port, letting it soak in all the sweaty goodness. This in addition to using a measured dropper to apply sweat to any openings or weak points, so the crew can carefully measure how durable the device is. All in addition to handing the headphones to staff under strict orders to do their worst. During all this testing, the device is on and playing music.

-How you can test for waterproof: dunk in tank, time…just seal off open areas

-How you test for sweatproof: hand to employees, say do your worst… use gaws to soak the charging connector in the nastiest sweat you can find, mention closed off charging connector changed with the release of the freedom, from the straight up micro usb port, bag of sweat, covering in dirt

-we use this sweat from this company