Identifying Insects By The Music Of Their Wings

In my last post, I showed you a brief history of insect traps. Some were pretty silly, but capturing insects... 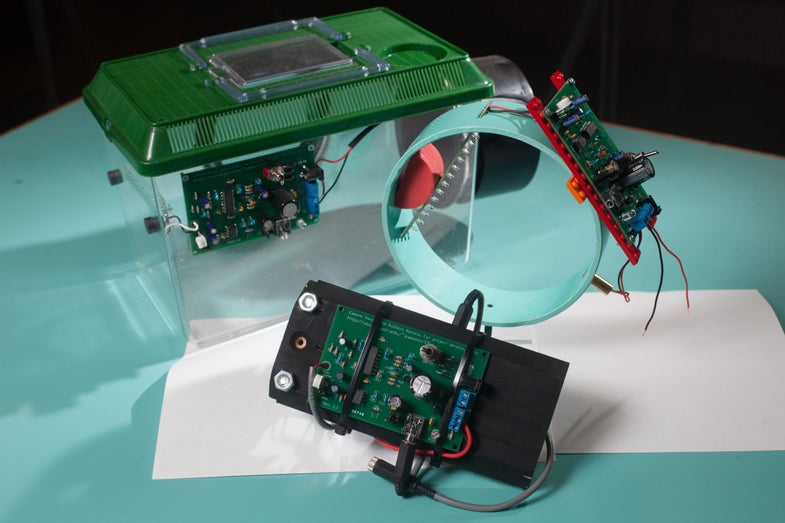 In my last post, I showed you a brief history of insect traps. Some were pretty silly, but capturing insects can also be quite helpful. Depending on the context, a trap may help lower the number of pesky insects in an enclosed space. Traps also show pest controllers and entomologists if a specific kind of insect is lurking around, and that information helps determine treatments or monitor species.

Many insect traps use lures made from synthetic pheromones, which are chemicals that insects use to communicate with each other. These lures usually grab the critters with a sticky trap or a killing jar. But the approach doesn’t always work very well for identifying specific species—by the time a person checks the trap, the contents look like pieces of lint or a few squiggly lines. It can be tricky to tell what kind of insects these are, even for a trained entomologist, let alone a farmer or a healthcare worker trying to track agricultural pests or disease vectors.

A team of computer scientists and entomologists led by the University of California, Riverside think they may have solved this problem for flying insects by tracking the sound of their flight with a sensor. Previous attempts to do this collected audio data with a microphone, which is really difficult because other louder sounds can drown out the buzz of an insect’s wings. The UC Riverside team got around this by using a laser light to track the movement of an insect’s wing beats, which can track movement at far greater distances than a microphone and without sound interference. They have a related paper in press at the Journal of Visualized Experiments.

The team built their sensor out of a cheap laser and a phototransistor array, which is connected to an electrical board. If an insect flies past the laser, its wing pattern breaks the light and the signal is converted to an audio file. A computer algorithm helps untangle the information to identify the species.

How does it do that? Different kinds of insects beat their wings at different frequencies, which helps identify what’s flying by the sensor at any given time—mosquitoes, for example, flap between 400 and 800 beats per second, while bees are more lethargic at 200 bps.

But an insect’s buzz has other musical qualities that help distinguish between species that move at the same tempo. “Wing beat frequency is one clue, but it’s not enough,” says Eamonn Keogh, a computer scientist at UC Riverside and lead researcher on the project. “If I hit a middle C on a piano, it’s the same frequency as a middle C on a violin. But it sounds different. So beyond the fundamental frequency of an insect flying, there is a color, texture, or musicality—a more complex signal. And we have ways of extracting that.”

The researchers tried the device on six insect species in the lab including four types of mosquitoes, house flies, and fruit flies. It was between around 80% and 99% accurate, depending on the species, and the accuracy improved if other information was added in, such as the insects’ circadian cycles (different insects are active at different times of day). It can also help differentiate between a female and a male of the same species, which is helpful for insects such as mosquitoes, where only the females eat blood.

Just to give you an idea of how difficult it is for our human ears to distinguish the sound of one insect species from another, here are a few examples. The files were created by Yanping Chen, a PhD candidate in the UC Riverside computer science department who worked on the sensor.

Of course, the group needs to do a lot more research including extensive field tests to make sure their sensor works in a practical setting. But if the sensor does work in the field, it could be a huge help to entomologists, farmers, and healthcare workers because they could see where species are in real time, rather than relying on the slow process of checking a sticky trap once a week and trying to figure out what insects have been where. Farmers, for example, could tell if winged pests are infiltrating a corner of an orchard and apply a targeted pesticide there, rather than blanketing the entire field; health care workers could similarly track vector insects and localize efforts to get rid of them to help prevent disease outbreaks.

Gary Hevel, an entomologist and research collaborator with the Smithsonian Institution who wasn’t part of the UC Riverside project, says that the device could definitely help save time for his work, which generally involves looking at specimens and identifying them based on their physical structures. “So much is happening with computers these days. I’m really fascinated to see this development—that something like this is happening and will be beneficial for us in the future.”

The UC Riverside team is collecting data from field tests in Brazil and Hawaii, which will help improve the sensor and algorithm. Eventually, Keogh hopes that audio files for a wide range of insects will be available online so that people can download the right signals for the pests in their part of the world.