After a pioneering patient contracted an infection earlier this year, animal-to-human transplant researchers are sharpening their tools. 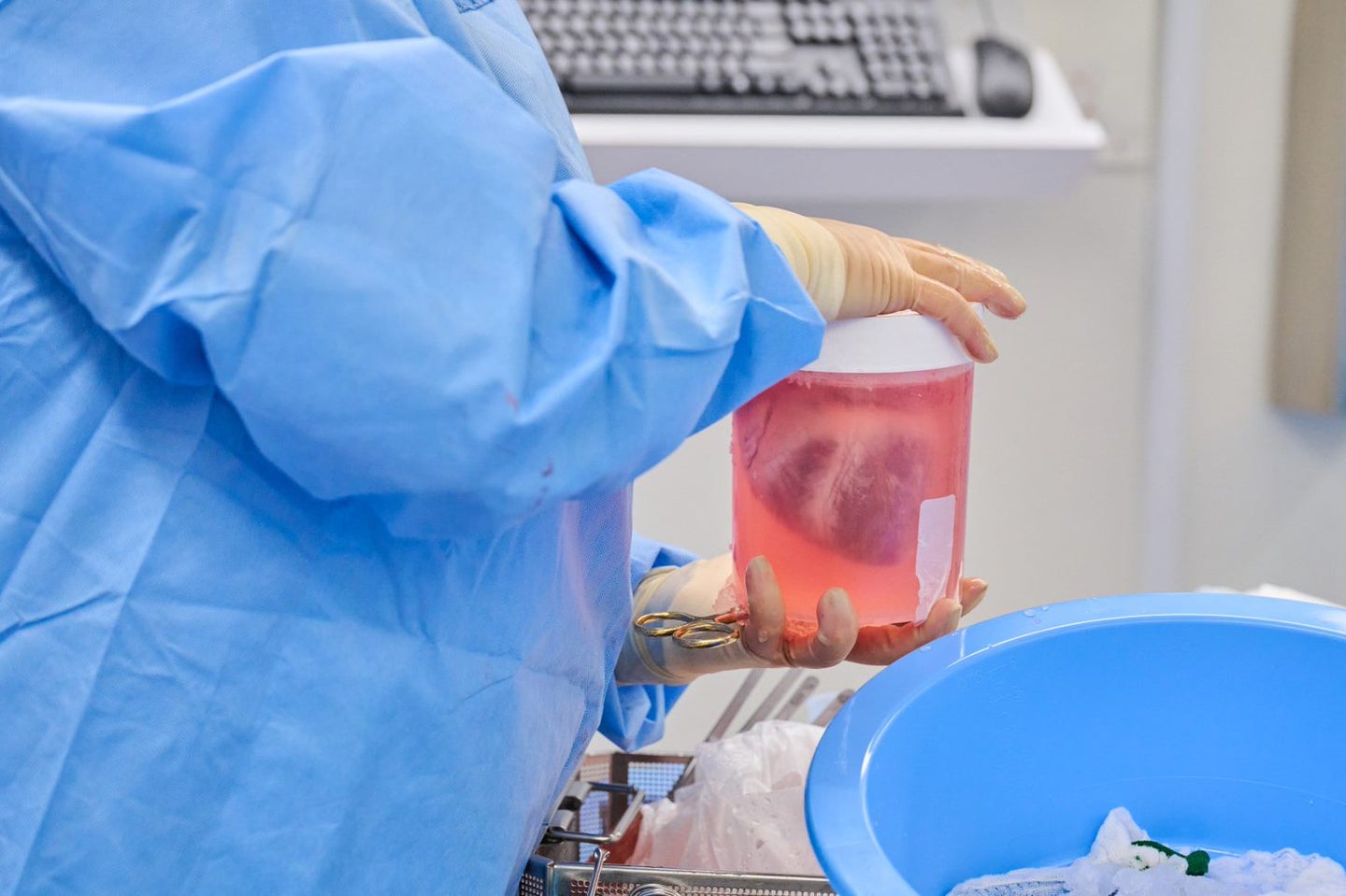 More than 100,000 Americans are currently on waitlists for an organ, and 17 people on that list die every day, according to the nonprofit that manages American organ transplants. A supply of reliable organs from pigs could eliminate much of that bottleneck—and the technology seems to be finally arriving.

After more than a decade of research, progress on xenotransplants, or animal-to-human transplants, has accelerated sharply over the past year. In January, surgeons at the University of Alabama at Birmingham successfully transplanted pig kidneys into two brain-dead patients. That same month, a team at the University of Maryland transplanted a pig heart into a patient named David Bennett Sr., who suffered from cardiac disease but wasn’t eligible for a typical organ donation. But 40 days after the procedure, Bennett grew sick and died of heart failure.

Those experiments have laid the groundwork for clinical trials, standardized experiments that would open the door to the widespread use of xenotransplanted organs. At the beginning of the summer, surgeons at New York University Langone Transplant Institute transplanted two hearts from specially bred pigs into patients who were brain dead. For three days, they monitored their vital signs, sampled their bodies, and tested them for viruses. At a press conference announcing the findings on July 12, the NYU team estimated that clinical trials might begin sometime between now and 2025.

[Related: The first successful pig heart transplant into a human was a century in the making]

But before they do, they’ll need to answer questions about protecting patients from swine-specific diseases. Bennett’s new heart turned out to be infected with a type of pig-specific herpesvirus, called porcine cytomegalovirus (PCMV), that went undetected before his operation. An investigation into the experimental transplant, published earlier this month in the New England Journal of Medicine, however, found that the virus didn’t actually infect Bennett’s human cells. It’s still unclear what role it played in his death.

In the NYU trials on brain-dead patients, surgeons didn’t detect any viruses. Yet the experience with Bennett Sr. highlights the scientific and ethical questions that remain in the way of clinical trials for a procedure that involves not just managing human viruses, but those from another species.

Infections during transplants are more common than you’d think.

Infectious diseases are also a major concern in allotransplants, or human-to-human transplants.

“We have a few hours in which to take the organ and put it in the recipient,” says Jay Fishman, director of transplant infectious diseases at Massachusetts General Hospital and a leading xenotransplantation researcher. So while transplant teams test the donor for diseases like hepatitis, those results often aren’t available until the operation is done. “Everyday I get emails from around the country saying, this donor had positive blood cultures,” Fishman says, meaning the patient now needs to be treated for a possible infection.

Of particular concern with transplants are diseases that can go dormant in a donor or recipient’s body, including PCMV, chickenpox, and parasitic worms. Because they’re not actively spreading, a donor might not test positive on a PCR test. “You can live with certain parasites your whole life without knowing it,” says Sapna Mehta, medical director of NYU’s transplant infectious disease service. The only way to spot a latent infection might be to directly test the nerve, muscle, or lymphatic tissue harboring the pathogen.

When transplant patients are treated with powerful immunosuppressant drugs to prevent their immune systems from attacking the new organ, “viruses or parasites can wake up and cause active infection,” says Mehta. Those infections can be catastrophic for someone who’s recovering from a serious organ disease and a major surgery.

But because organ supplies are so limited, physicians will still work with donations from infected patients. “We know sometimes that we have hepatitis C-positive [living kidney] donors, and there are recipients who are willing to get those organs because we can treat hepatitis C,” says Anoma Nellore, associate medical director of UAB’s transplant and immunocompromised infectious disease service.

Xenotransplantation can reduce some of the uncertainty of infections, while creating other unknowns.

The pigs that provide the organs are produced by three US-based biotech firms, Revivicor, eGenesis, and Makana Therapeutics. They’re genetically modified to produce cells that are coated in the same proteins and sugars as those of a human, which reduces the risk of rejection or allergic reactions. Just as importantly, however, they’re bred and raised to prevent the transmission of pathogens during transplants.

Before a surgery, the companies have virtually unlimited time to screen pigs for diseases. “They receive immunizations, they undergo deworming, and they get surveillance screening,” Mehta says. “Some of those [tests] are performed on blood; some are performed in the stools of the pig; some of them are nose swabs. … Stool samples are looked at under a microscope for parasites. It’s done right up until the time that an organ is procured.”

Xenotransplant teams also have their own layer of precautions. NYU, Mehta says, screens for a number of pig viruses that can lie dormant. In their most recent experiment, they took samples from the pig and recipient before the transplant, and then every 24 hours through the three-day study.

But testing technologies and protocols for pig viruses aren’t as well-established as the tests used in allotransplants. And that’s part of what appears to have led to Bennett’s infection. “The nasal swab was negative [for PCMV],” says Muhammad Mohiuddin, director of UMD’s cardiac xenotransplantation program. “So based on our experience, we were very sure that there was no PCMV in the pig.”

In the two months after Bennett’s surgery, however, he began to test positive for the virus, and levels of the pathogen’s genetic material in his blood rose. When the transplant team went back to the pig’s spleen, they found latent PCMV. “The question now is, what did the latent virus do?” Mohiuddin asks.

After Bennett’s death, surgeons found that tissues in his heart had ruptured, and the entire organ had swelled. The symptoms resembled those seen in pig-to-baboon transplant experiments—baboons found to be infected with PCMV lived an average of three weeks less after the operation than virus-free monkeys.

But Mohiuddin says that he hasn’t even seen indications that the virus was even spreading inside the pig heart. “We have not seen the actual virus using electron microscopy—usually you’re able to find the virus,” he explains. The fact that the team found PCMV could be a byproduct of unrelated damage to the heart, which could lead the dormant virus to leak into the blood.

Fishman agrees. “Remember that this patient was sick. He’d had multiple surgical complications; he’d been on life support for a prolonged period of time,” he says. “He was not in the physical condition that you would have expected to survive even as long as he did.”

It could be that the virus was just one trigger in a larger inflammatory process that eventually caused Bennett’s heart to fail—but that uncertainty highlights the scientific value of preventing infections no matter the outcomes. It’s hard to know how well a transplant worked with the extra variable of a virus, which makes it harder to weigh the risk of future experiments.

Going forward, Mohiuddin says that UMD plans to use an even more sensitive PCR screening for PCMV—though that hasn’t always caught infections in baboon studies—and testing more pig tissues. What’s more, he says, there needs to be a standard in place for treating PCMV infections in people: Antivirals for the disease exist, but the side effects were too intense for Bennett.

The most appropriate strategy for ensuring that future xenotransplanted organs are safe , both he and Fishman say, is one called a serological assay, which would look for the presence of PCMV antibodies in the donor pig. That test looks at a pig’s immunological past, rather than current infections. If it has antibodies, that means it’s been exposed to the virus, and could be harboring a latent infection.

Both Mohiuddin and Mehta of NYU say that it’s their understanding that those antibody tests are being developed right now. However, a spokesperson for Revivicor, which grew the pigs used in all this year’s studies, said to Popular Science that the company wouldn’t comment on its approach.

[Related: How animals can help us demystify viruses]

Another longer-term challenge is that there may be pig diseases that transplant physicians don’t even know to look for. “The literature about pig viruses tells us for the most part how these viruses behave in pigs who have healthy immune systems,” Mehta says. Some of those may behave very differently in an immunosuppressed human body.

NYU’s approach to that involves scanning for the traces of whole families of pathogens, rather than hunting for just one organism. “You have the opportunity to do tests that will find whatever’s there,” says Fishman, who has advocated for those wider kinds of screenings.

So far, NYU says it hasn’t turned up any novel bugs. “Our priorities include preparing for both the known and the unknown,” Mehta says. But for the moment, the known is what’s causing problems.

Clinical trials could be the next step in xenotransplantation.

One of the key lessons from Bennett’s operation, physicians agreed, is the need for a uniform approach to testing. “There’s no central lab that we can send a sample to,” says Mehta.  Right now, each of the four US experiments involves new patients, different tests, and a variety of treatments, making it hard to compare outcomes.

In spite of those questions, Fishman is optimistic about the field’s readiness to start clinical trials. By stepping up testing or treatment, he says, transplant teams have tools for dealing with known pathogens. And “without clinical trials, we’re guessing” at the risks, he adds. “We’re being careful, but we’re guessing.”

But the unknowns of possible viruses and infections create an ethical barrier to clinical trials: It’s hard to get informed consent from patients without knowing all the specific risks of a xenotransplant, particularly “because you can’t really stop being in [a trial] once it happens,” Nellore says.