More than a hundred thousand patients wait on the organ transplant list. Genetically modified pigs might one day be potential donors. 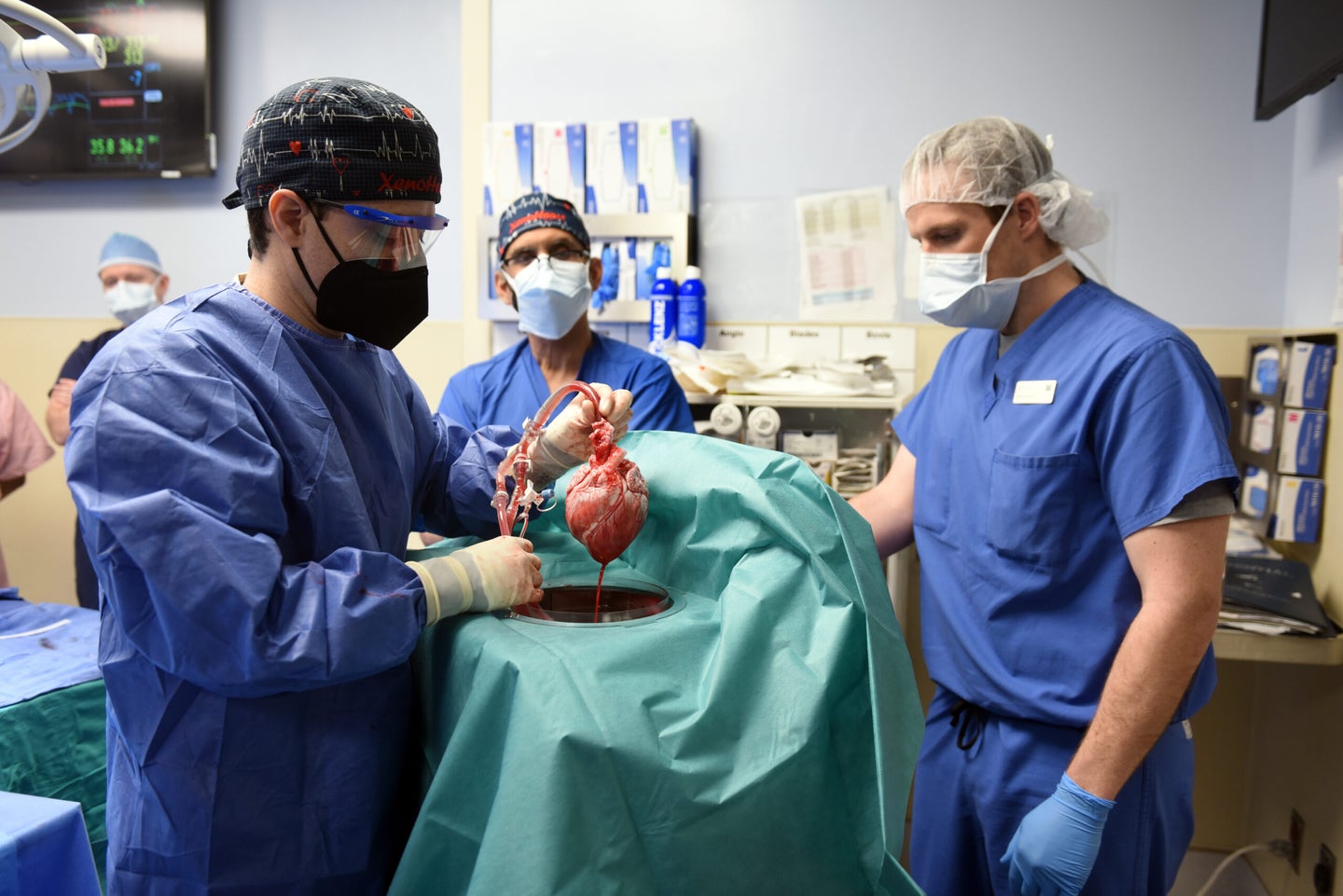 Last Friday, January 7, David Bennett went into the operating room at the University of Maryland Medical Center for a surgical procedure never performed before on a human. The 57-year-old Maryland resident had been hospitalized and bedridden for months due to a life-threatening arrhythmia. His heart was failing him and he needed a new one.

Bennett’s condition left him unresponsive to treatments and ineligible for the transplant list or an artificial heart pump. The physician-scientists at the Baltimore medical center, however, had another—albeit risky—option: transplant a heart from a genetically-modified pig.

“It was either die or do this transplant,” Bennett had told surgeons at the University of Maryland Medical Center a day before the operation. “I want to live. I know it’s a shot in the dark, but it’s my last choice.”

On Monday, the team reported that they completed the eight-hour procedure, making Bennett the first human to successfully receive a pig’s heart. “It’s working and it looks normal. We are thrilled, but we don’t know what tomorrow will bring us. This has never been done before,” Bartley Griffith, M.D., physician and director of the cardiac transplant program at the University of Maryland Medical Center who led the transplant team, told the New York Times.

While it’s only been five days since the operation, the surgeons say that Bennett’s new pig heart was, so far, functioning as expected and his body wasn’t rejecting the organ. They are still monitoring his condition closely.

“I think it’s extremely exciting,” says Robert Montgomery, M.D., transplant surgeon and director of the NYU Langone Transplant Institute, who was not involved in Bennett’s operation. The results of the procedure were also personally meaningful for Montgomery, who received a heart transplant in 2018 due to a genetic disease that may also impact members of his family in the future. “It’s still in the early days, but still the heart seems to be functioning. And that in and of itself is an extraordinary thing.”

[Related: Surgeons transplanted a pig kidney into a person, and it worked like normal]

Pig heart transplant operations are still not officially approved by the U.S. Food and Drug Administration, but the agency granted emergency authorization for the surgery on December 31. The experimental procedure comes at a time of growing need for organ transplants. More than 100,000 people in the United States are on the list to receive one, while around 17 die each day waiting, according to the latest data from the federal government’s organdonor.gov. The desperate demand far exceeds the number of human organ donors.

“There aren’t enough organs, period,” Montgomery says, who was part of the team that successfully transplanted a genetically modified pig kidney in a human in 2021. Of an estimated 800,000 patients on dialysis who’ve developed end-stage kidney disease, only 90,000 are on the list for a human organ transplant, he points out. Pig organ transplants give another potential “way to to fill that gap between the supply and the demand.”

The field of research and the techniques behind animal to human organ transplants has come a long way to reach this moment—from myth and pseudoscience to sophisticated medical application. Xenotransplantation, or grafting and transplanting of organs and tissues between two species, has a long history, says Montgomery, who has been involved in this field for more than 30 years.

“It has really been considered since the dawn of transplantation,” he says. “People were thinking about the use of animal organs for over a hundred years.”

Throughout the 19th century, chickens, rats, dogs, frogs, and other animals were used for skin grafts. Researchers continued to encounter incompatibility issues between humans and animal organs and tissues. This was because many animal species have a cell membrane sugar called galactose-α1,3-galactose, commonly referred to as alpha-gal. “That sugar is also on the surface of bacteria,” explains Montgomery. Humans are exposed to these bacteria from birth in the GI tract, which triggers the immune system to make antibodies against alpha-gal to prevent those bacteria from entering the blood. People have “a huge reserve of these antibodies just circulating in our blood all the time,” Montgomery says, and those antibodies will attack animal organs because they recognize alpha-gal as a target.

Around the 1960s, surgeons began to look towards closer relatives to humans: primates. “Primates are obviously much closer to humans on the evolutionary scale, and so you don’t have that immediate incompatibility with alpha-gal in some of the primates,” Montgomery says. A surgeon at Tulane University in New Orleans transplanted chimpanzee kidneys into patients, one of whom survived for nine months. Most famously in 1984, Baby Fae, a newborn infant with an underdeveloped heart, received a baboon heart, but her body rejected it after 20 days.

By the 1990s, the public perception towards primates as organ donors had soured. “They’re much more scarce on the planet,” says Montgomery. “I was at a xenotransplant meeting in the 1990s and Jane Goodall was the keynote speaker… At the end of that, it was really clear to all of us that primates were not going to be the organ donors we were going to use.” Concerns over zoonosis, or the transmission of disease from animal to human host, were also rising, likely because of the HIV/AIDS epidemic, Montgomery adds.

[Related: Lab-grown pig lungs are great news for the future of organ transplantation]

The scientific stage was set for swine. Pigs became prime donor candidates because of their abundance, large litters, ease of breeding, rapid growth, and generally similar organ size to humans.

Plus, most people have a much different relationship with the animal as a longtime food staple, says Montgomery, though he expects ethical concerns to continue to rise as the field progresses, such as whether or not animals should be genetically modified for transplants.

But there were two big hurdles the research field had to jump over before pigs could be a viable option: the issues with alpha-gal and the potential cross transmission of viruses, particularly the porcine endogenous retrovirus (PERV) discovered in 1997. Now, researchers have been able to genetically edit out the alpha-gal target from the pig genome. Today, people have undergone pig skin graft treatments for burns, have pig heart valves, or received pig cells, like those that help produce insulin, and have not experienced any diseases.

The genetically modified pigs used for organ donation are bred, studied, and cared for in extremely clean facilities, and they’re surveilled for potential pathogens. “It’s almost like an operating room,” says Montgomery. “They are very humanely treated.”

Up until now, most experimental transplant procedures have been done between pigs and other animals. “Taking it into a living human, that’s the leap,” Montgomery says about the University of Maryland Medical Center’s transplant. “The genie is out of the bottle. Now, we really need to understand what this is going to look like in humans, and start to work on optimizing the outcomes. But time is of the essence, let’s move ahead boldly.”