These ‘experts’ once said women couldn’t play football. Boy were they wrong. 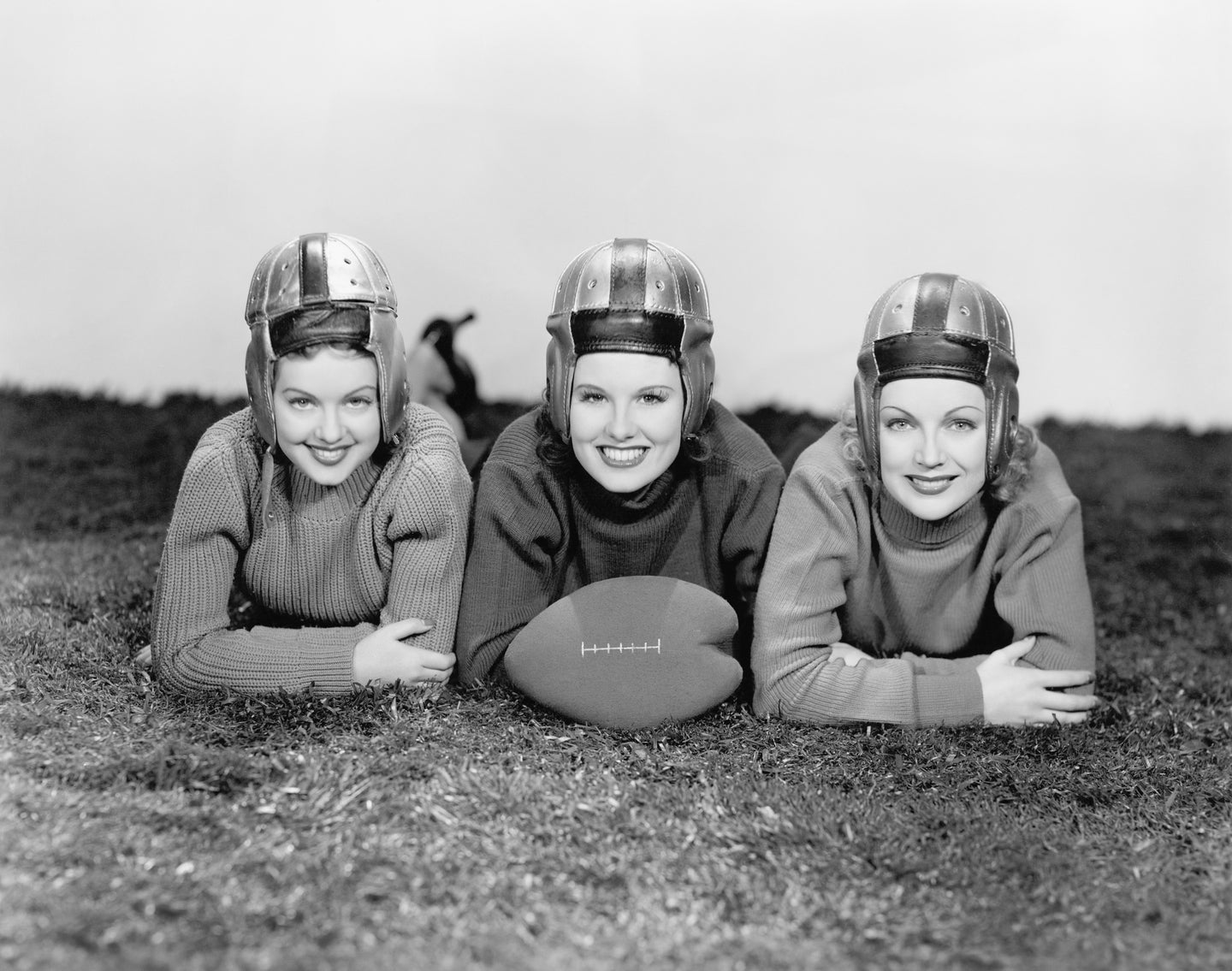 Most people were probably hoping that the National Women's Football League would look a lot like this, but the first female players hit the gridiron hard. Deposit Photos
SHARE

This article has been excerpted from Hail Mary: The Rise and Fall of the National Women’s Football League by Britni de la Cretaz and Lyndsey D’Arcangelo. Copyright © 2021. Available from Bold Type Books, an imprint of Perseus Books, LLC, a subsidiary of Hachette Book Group, Inc.

In October 1939, history was made as the first full-contact women’s football game to be played in Los Angeles took place at Gilmore Stadium. The Chet Relph Hollywood Stars faced off against the Marshall Clampett Amazons of Los Angeles in front of two thousand five hundred spectators. NFL rules governed the game, which consisted of twelve- minute quarters. The Los Angeles Times was on hand to cover the game in full detail, and Life magazine would feature a two-page photo spread of the players in the November 22 issue.

During a time-out, the Life photographer snapped a playful photo of the girls pouring jugs of water over each other’s heads in an attempt to cool off from the heat. In another photo, Amazon halfback Babe Culler is smiling widely with a large, white plaster Band-Aid strip clinging to her bloodied cheek. Of course, interspersed between photos of game action is also one of Mary Zivalic, a 205-pound center, hiking the ball between her legs at the camera with the caption saying she likes to play football because “it helps keep her thin.” (This tongue-in-cheek imagery in the media is yet another constant in women’s football history.)

The players wore regulation uniforms along with their own tennis shoes and played with an undersized football. They also wore circular, spongelike rubber pads over their breasts for protection (there’s also a picture of this in the Life magazine spread). Lois Roberts, who played in her bare feet and could punt the ball fifty yards, and Shirley Payne, a quick and slithery halfback and two-way player, were the stars of the game for the Amazons. Payne’s forty-five-yard interception return helped seal the victory for the Amazons, 12–6.

Initially, the overall reception of the contest at Gilmore Stadium was positive, with newspapers around the country picking up the story and marveling at the athleticism of these would-be housewives and fair maidens. Life magazine was especially complimentary, and pleasantly surprised by the aggression and the quality of play on the field.

“It was no powder-puff battle. The girls were rough and tough. They kicked each other in the stomach, dirtied each other’s faces, tackled and blocked savagely, knocked four girls unconscious,” the magazine reported. “And, strangely enough, they played good football, seldom fumbling or running away from their interference.”

But, as with previous women’s football matches, the compliments only went so far. The article also went on to describe the reactions of “doctors” who had heard about the game and were “horrified” at the thought of it.

“Football, they said, is a dangerous sport for girls. A woman’s body is not heavily muscled, cannot withstand knocks,” read the article. “A blow, either on the breast or in the abdominal region, may result in cancer or internal injury. A woman’s nervous system is also too delicate for such rough play. It would be better, they thought, for the girls to stick to swimming, tennis and softball.”

Dick Hyland, a renowned sports columnist for the Los Angeles Times and a former Olympic athlete, wasn’t a doctor, but he was also appalled at the idea of women playing football. He dedicated an entire column to mocking the event, one week before the game was even played.

“What, WHAT, is the world coming to? The loving, clinging vine now are ‘smashing types and good hard blockers!’” Hyland wrote in a condescending tone. “I don’t know what all this feminine activity is supposed to prove in the world of sports. In fact, I’m wondering if the report doesn’t belong in the entertainment pages or over with the crime news.”

There was no follow-up column after the game took place. Perhaps Hyland felt there was no need to actually attend and watch for himself. He had made it clear that the game wasn’t important enough for him to cover or take seriously. It didn’t matter how well the athletes played or that, despite the fact that they emerged from the fray with a few bumps and bruises, they were still able to make it home in time to put dinner on the table, as they would have been expected to do by society’s rules. Or that both teams continued playing, traveling to different cities to take part in more exhibition games—the Amazons and Hollywood Stars even went abroad to showcase their football skills in Guadalajara and Mexico City. For Hyland and the like—and, it seems, the Los Angeles Times— there was no place for women in football.

Others who were a little more open-minded decided a rule change was in order to make the game safer for women. Not long after the first Los Angeles game, a new brand of girls’ football was introduced. Stephen Epler, a former Nebraska schoolmaster, had introduced six-man football for boys in 1934 so the sport could be played safely and for fun at town playgrounds and schools. In 1939, he decided to revise the rules to create a similar game for girls with no tackling, a smaller field, and a lot more passing. It was essentially the beginning of what is now known as powder- puff football, a seemingly less aggressive form of football played by women at the high school and college level.

Epler’s form of girls’ football quickly caught on. After-school programs and high schools all over the country adopted and employed it. But not everyone bought in. Tom Brislin, a writer for the International News Service, reported in December 1939 that the Pennsylvania Department of Instruction and the Pennsylvania Interscholastic Athletic Association, which controlled nearly nine hundred member high schools in the state, disapproved of the “establishment of female football” in Pennsylvania high schools—even when played under Epler’s new rules—and essentially banned girls’ football from the state.

When the Bradford Evening Star ran a portion of Brislin’s article, the editorial staff put it in place of its regular sports column, “Speaking Of: Sports by Sikes.” At the end of the article, they added their own pithy little commentary:

“The writer along with many others are against women participating in the football sport. It is too rough of a game and despite the precautionary measures advocated serious injury will be unavoidable. The members of the fair sex better try baseball or basketball to keep their curves instead of the gridiron sport.” (Ironic, since girls have been historically and systemically excluded from baseball, too.)

But women didn’t stop playing tackle football—doctors, Dick Hylands, new rules, and high school athletic associations of the world be damned. In 1939, down in Atmore, Alabama, seventeen-year-old Luverne Wise became a kicker for the Escambia County High School football team. Wise decided to join the team because she and her friends were tired of the “football is man’s game” rhetoric. Coach Andy Edington offered her a tryout, not expecting Wise to actually take him up on the offer. After practicing with the team and showing off her Carli Lloyd–like kicking skills, she made varsity. Wise played again in 1940 during her senior year and did more than just kick extra points and field goals. She also threw a few PAT passes and earned an All-State honorable mention as a quarterback. Wise’s goal after graduation was to coach a girls’ football team.

In Montrose, Colorado, a group of eager women got together to hold their own tackle football game in the mud. No serious injuries were reported but a few jerseys “got red-streaked from some mildly bloody noses.” And in 1941, a women’s professional football league attempted to launch in Illinois. The league was said to consist of eight teams, including the New York Bombers, Chicago Bombers, and Chicago Rockets. The two Chicago teams clashed in an exhibition game midsummer at Spencer-Coals field under regulation football rules. The goal was to play a schedule of games throughout the fall season. But this league never made it that far. What little media build-up and excitement preceded that first exhibition game and the launch of the league fizzled out.

In some cases, extenuating circumstances allowed women a chance to play. While most young men were still overseas during World War II, schools and colleges across the nation were suspending football seasons and campus activities, including Eastern State Teachers College in Madison, South Dakota. But in the fall of 1945, Eastern State decided to hold its homecoming weekend to help celebrate the end of the war. And what homecoming would be complete without a football game?

With only three men enrolled for the fall semester, the women of Eastern State dared to wonder if they should step in, much like women did in baseball, with the formation of the All-American Girls Professional Baseball League (AAGPBL). They decided, Why not? Roger Holtzmann of South Dakota Magazine wrote of the event, “uniforms presented a minor problem, and not for the reasons that might come to mind first. After five years in storage, apparently without mothballs, the college’s jerseys were rife with holes and most of the pads were literally coming apart at the seams.”

Thankfully, they were able to round up some spare uniforms for everyone to play. Though the game went on as planned and the homecoming was a success, the girls of Eastern State who played that day never took the field again. Despite how much fun they had and a high turnout of friends, family, and alumni, they never expected anything to come from the event. It exists merely as a fond memory, one they can happily share with their great-grandkids—that time they got a chance to play football.