No one wants another H-bomb test in the Pacific

To avoid reliving the worst of the Cold War, the United States needs to relearn deterrence 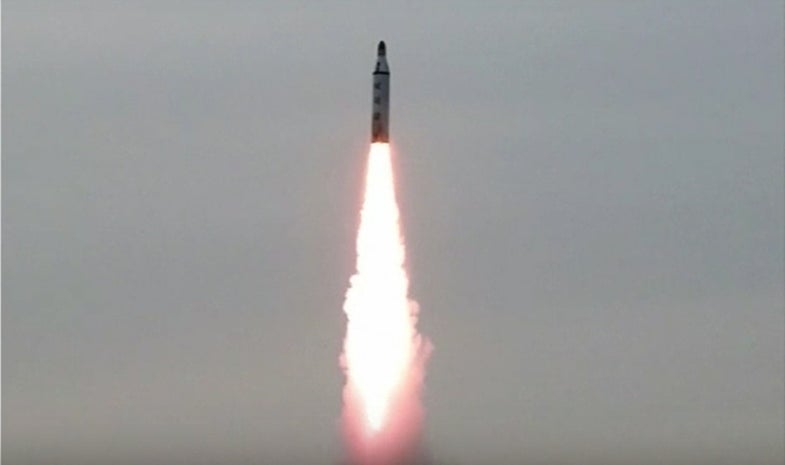 The first atomic test was atmospheric. From that day in 1945 and through the first two decades after the end of World War II, the United States and the Soviet Union conducted around 400 more atmospheric tests in total. France carried out its last atmospheric test in the 1970s, and China conducted the last atmospheric nuclear test to date in October 1980. Over half the population of the world is younger than the last nuclear detonation in the sky, but that might all change as tensions between the United States and North Korea edge toward a modern atomic brinkmanship.

North Korea is the only nation to test nuclear weapons in the 21st century. So far, all of North Korea’s tests were done underground, where the effects of the blast can be better contained. Testing an atmospheric blast means lofting a warhead vertically, above North Korea itself, or it means launching on a more horizontal trajectory, with the missile carrying a nuclear warhead traversing over a nearby country. While within the technical abilities of Kim Jong-un’s state, it took a failure of diplomatic understanding to even put the test on the proverbial negotiating table.

On Friday, Foreign Minister Ri Yong-ho said that, in response to President Trump’s threat at the United Nations to destroy North Korea, Pyongyang may take action, up to and including the “powerful detonation of an H-bomb in the Pacific,” according to Yonhap. The statement followed an escalating war of words that week, as the president of the world’s oldest nuclear power tried to constrain the world’s youngest.

To understand the risk posed by a possible new atmospheric test, it helps to step back to 1963, when the United States and the Soviet Union signed the Partial Test Ban Treaty. And we’ll need to narrow our scope a little—down to baby teeth.

“Health concerns in the American public were rising, because of detectable levels of radiation in people’s bones,” says Alex Wellerstein, an assistant professor at the Stevens Institute of Technology who specializes in the history of nuclear weapons. “There was a big event called the baby tooth survey, where people were encouraged to send in their children’s baby teeth after they had fallen out. Scientists could use that in conjunction with the location and the age of the child to track how much Strontium 90 was getting into American bones.”

Strontium 90 is a radioactive isotope produced by nuclear fission. With atmospheric tests, the plume of radioactive by-product would stay in the atmosphere, mix with other clouds, and then come down when it rained, and end up in the ecosystem, like on grass. Cows would eat that grass, and then because strontium acts like calcium chemically, that strontium would end up in the milk, and then end up in human bones.

“Little bits of this stuff aren’t going to cause you lots of trouble,” says Wellerstein, “but as you raise that exposure up higher and higher and over large populations, you’re just adding little bits of uptick to the base chance of fatal cancer, which is already higher than people like to think about. Adding a couple percentage points in there for a population of 300 million starts to add up to thousands of people, even if it’s hard to detect which radioactive source the exposure was from specifically.”

Besides the health impact, there was a strategic reason to ban atmospheric tests, too. Testing underground limits the size of the weapons that a nation can develop. Not every nuclear power signed and abided by the Partial Test Ban Treaty: besides North Korea, France and China are still not signatories, though it’s been decades since either tested in a way that would violate the treaty. Should North Korea decide to test a weapon in the Pacific, it would also have the challenge of getting that weapon to the Pacific.

No safe trajectory to the Pacific

“The shortest pathway to open ocean is over Hokkaido the way they’ve gone with the two Hawsong tests,” says Vipin Narang, an associate professor of political science at MIT. “It’d have to be a trajectory that doesn’t look like it’s coming to the continental US or Guam, and gives them open ocean. That’s the Hokkaido trajectory, we’ve gotten used to it, they’ve gotten used it it, I think that’s probably the way they go, and it’s the thinnest part of Japan, so the risk to Japan is minimized.”

Twice in August, North Korea tested missiles in a flight over the southwestern peninsula of the island of Hokkaido in Japan. It was the first and second such launches over Japan in over a decade, and the only ones so far that are explicitly missiles, rather than satellite launch vehicles. The launches passed over only two small parts of the island, but they still passed directly through Japan’s airspace, and prompted text alerts for the public in case the tests were instead an attack. Minimizing risk here does not mean no risk, and that’s assuming the missiles perform as expected and carry on into the Pacific.

“The United States only once tested a live warhead on a ballistic missile on ballistic trajectory,” says Wellerstein. “It was Shot Frigatebird of Operation Dominick, which was a submarine launched missile.”

Most nuclear tests involved the warhead tested on its own, or on a special small missile designed for testing, while most ballistic missile tests involved missiles without warheads attached. Those kinds of tests have failure states on their own, but it’s the combination that makes things especially dicey, should something go wrong.

“In general, testing both at once adds a lot of risk and uncertainty and isn’t safe,” says Wellerstein. “There are worst case scenarios which can you prevent with clever engineering, like putting a sensor on the warhead that says ‘if I’m not where I’m supposed to be, don’t go off’, and hopefully North Korea will build those. Less catastrophic but still not good, the missile blows up on the warhead, which won’t explode ideally but may disperse plutonium, or it may blow up in midair. And missiles sometimes do explode on a launchpad and disperse plutonium all over, which is a contamination problem.”

There is the chance that the missile does not reach its intended spot in the Pacific, and explodes prematurely over land. It could also be targeted by missile defense systems, which have so far never succeeded against a target in realistic conditions (though some systems have had some successes in recent test exercises). A test that fails over land and results in deaths, especially if the warhead goes off.

“If something doesn’t go according to plan, and the warhead detonates at a lower altitude than intended and then there are effects on shipping or civil aviation or loss of life,” says Narang, “that’s a world-changing event, that’s an act of war, and I’m not sure how we’re going to climb down from that.”

During the Cold War, when the United States and the Soviet Union conducted provocative missile tests, but wanted to make sure that those tests weren’t interpreted as an attack, the countries would give the other a heads up about the attack, sharing not everything about the test, but enough information to keep the test from causing the end of the world.

Should North Korea fire the missile, and it survives intact to pass over Japan and into the Pacific, it would still pose a danger to anything nearby. The Pacific is enormous, so the odds of anyone being directly in harm’s way is low, but without advance notice of where the test is taking place, it’s impossible to make sure that there is no one in the area. Then, the explosion would produce the standard nuclear effects: blast, fire, and radiation, which would be a bad (and likely fatal) day for anyone close enough to experience those effects.

There could also be an electromagnetic pulse, though beyond the immediate area experiencing the blast, fire, and radiation, it’d be hard to say how much extra reach that electromagnetic pulse effect would have. Many planes in the United States have some protection against this, which is to say some protection against electrical storms, that might translate into protecting it from the pulse.

Outside the immediate blast area, there’s still that plume of radioactive gas.

That plume, and the deadlier risks it entails, is one possible outcome of tensions and miscommunication between the White House and Pyongyang. Should North Korea be the first nation to conduct an atmospheric nuclear test in this century, it would not be the first nation to surprise the United States with such a test. In 1966, China detonated a nuclear weapon at high altitude while President Lyndon B. Johnson was visiting Thailand.

Relearning how to win another Cold War

“All the same rhetoric we used for Kim Jong-un, we used for Mao,” says Narang. “We said ‘he’s a madman, he can’t be trusted with nuclear weapons’. But we managed. Deterrence has a logic of its own, it’s a universal language. The reality is, Kim Jong-un has bought himself insurance against external regime change, invasion, probably efforts at disarmament. Should the United States attempt it, there’s a possibility of Guam or Japan or even the continental United States eating a nuke. This reality is why he bought himself nuclear weapons in the first place, so he didn’t meet the fate of Saddam and Gaddafi. He’s not going to give them up.”

For decades, the United States maintained a policy of denuclearization for North Korea, hoping some combination of sanctions and diplomatic pressure would convince the pariah state to abandon its nuclear ambitions. Despite the sanctions, despite attempts to isolate North Korea diplomatically, the country developed its own nuclear weapons. This progress capped off this summer with the tests of two intercontinental ballistic missiles and a thermonuclear bomb.

“And the fact is, he’s a nuclear weapons power at this point. We have to get out of the frame of trying to denuclearization, because that’s probably not going to happen,” says Narang. “It means learning how to practice deterrence, like we did with the Chinese and the Russians. It means dialogue and diplomacy at some level. We don’t have to like it, but this is the reality right now. Once you pass the threshold, the cost of denuclearizing is higher than practicing deterrence, which is something the United States is actually pretty good at.”