What Do We Know About North Korea’s Latest Satellite Launch? 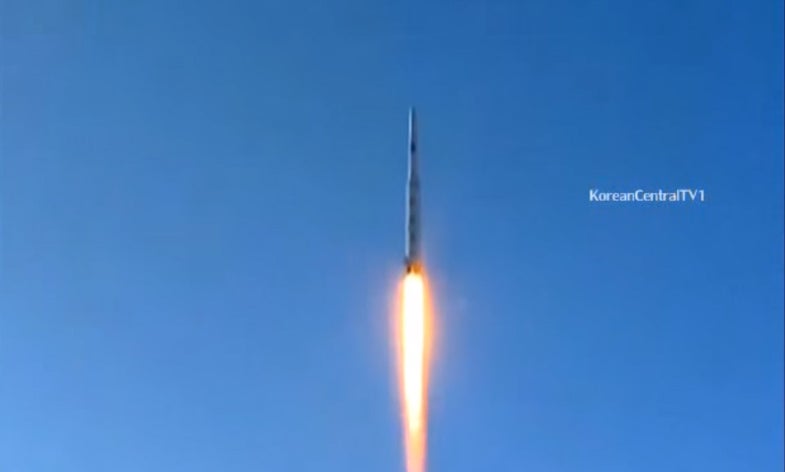 Yesterday morning, at around 9:30 a.m. Pyongyang time, North Korea fired a rocket into space. On the East Coast, the news broke at about 7:30 Saturday night. Earlier this month, North Korea announced they would launch a satellite in February, but no one really expected it to happen so quickly. We followed the updates live as they came in. Now that the dust, literal and metaphorical, has started to settle, what do we actually know about the rocket North Korea used, and about the object they hurtled into space?

This is the least helpful part of the whole process. The Democratic People’s Republic of Korea is a tightly controlled pariah state, where even modest improvements to submarine missile launch technology get buried in hour-long propaganda videos and recut to demonstrate a glorious success.

The official statement from North Korea contains both technical information:

This is from the video North Korean state television broadcast of the launch:

The Satellite Is In Space And It Is Very Quiet

Kwangmyongsong-4 appears to be in orbit, but it hasn’t yet transmitted anything detectable. Transmission is key: there’s a pretty great account of NASA researcher and radio enthusiast Henry Richter listening for the transmissions from Russia’s Sputnik satellite, and a recording of the beeps can be heard online. If North Korea’s satellite isn’t transmitting, that likely means it doesn’t work, and turns a space launch from a technological triumph into an expensive way to dump waste in orbit.

It’s possible the satellite is transmitting and just hasn’t been heard yet. At North Korea Tech, Martyn Williams writes:

The Satellite Matters Less Than The Rocket

No one really likes North Korea, and given the hermit kingdom’s propensity for surprise illegal nuclear weapons tests, combined with its mass starvation of its own people, that skepticism is well-earned. In response to the latest launch, South Korea and the United States issued a joint statement about working together to “begin formal consultations regarding improvements to the Alliance missile defense posture, specifically the viability of a Terminal High-Altitude Area Defense (THAAD) system operated by U.S. Forces Korea.” So, essentially, improve and deploy a weapon made for destroying rockets.

Yet as much as this is a test of North Korean rocket technology, it doesn’t really have the characteristics of a normal ballistic missile program. Key to standard ballistic missile operation is the ability to launch the missiles quickly. As Tyler Rogoway writes at Foxtrot Alpha:

So as much as countries move to counter this rocket, it’s likely not a threat yet, and won’t be without significant improvements, both to North Korean rockets and to their warheads. It’s always possible that North Korea’s scientists learned something new for a weapons program with the test, but we’ll have to wait and see, and we shouldn’t be running to fallout shelters just yet. In the meantime, we can wait to see if their satellite transmits anything, or is just another object in space.