Another barrier for an uncertain weapon. 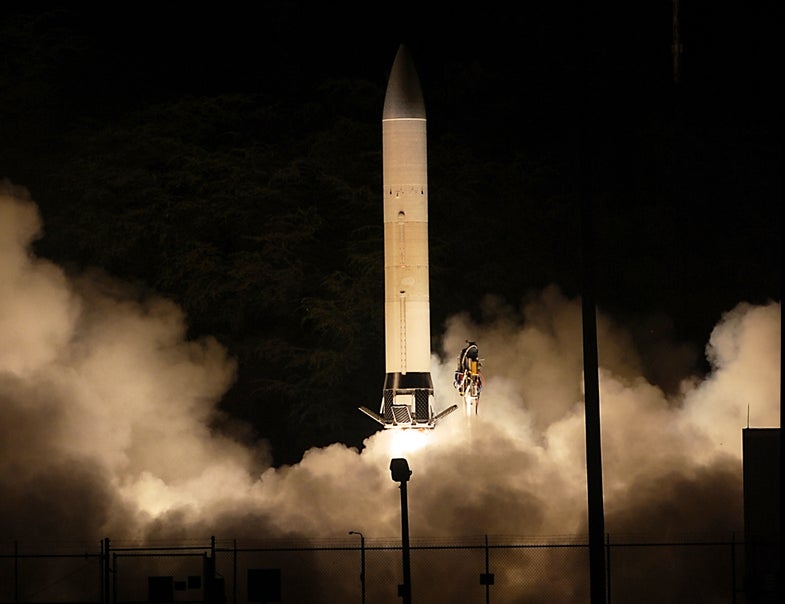 The art of the war is complicated, but the science of war is often just a matter of shooting something pain-inducing at the other guy faster and from further away. The Army’s Advanced Hypersonic Weapon program wants to do just that, by creating a missile that moves faster than Mach 5, or almost 3,800 miles per hour. That hypersonic future may be just a little further away than expected. During testing of the weapon in Alaska early Monday morning, the rockets propelling the missile exploded four seconds after liftoff. No one was injured, but the cause of the failure has yet to be determined.

The U.S. Army Space and Missile Defense Command conducted the test at the Kodiak Launch Complex on Kodiak Island in Alaska. Here’s what the facility looks like after the explosion:

The missile was designed by Sandia National Laboratories, in part as an alternative to Intercontinental Ballistic Missiles, or ICBMs. ICBMs are a mainstay of America’s nuclear arsenal, so while they can cover great distances quickly, it’s hard to know until they hit their target whether the warhead they’re carrying is nuclear or not. The hypersonic missile is designed to carry a conventional warhead, so it doesn’t look like a nuclear missile but still allows the military to attack quickly and hit something that’s far away. Not looking like a nuclear attack is important because it’s less likely to provoke an immediate nuclear retaliation.

Carried inside a rocket, the hypersonic missile is released at high altitude, screaming through the atmosphere in a flight pattern that’s clearly different from that of an ICBM, which launches into space from silos in the ground or submarines, traveling at speeds of over Mach 20, before returning to Earth.

Besides for not looking nuclear, the hypersonic missile has the advantage of being able to fly fast past the advanced anti-aircraft defenses that threaten the much slower B-1 and B-2 bombers, both of which top out at around Mach 1. This is a big plus for hypersonic weapon proponents, who see the missile playing a valuable role in potential future conflicts between the United States and China. For their part, China appears to be actively pursuing similar technology.

Failure with high speed weapons has precedence. The weapon is similar to a DARPA program for a hypersonic aircraft that could travel at over 13,000 miles per hour. In 2012 the test vehicle failed when the hypersonic part accelerated through its own skin. So far, the Army version has been the most successful hypersonic weapon platform, but following Monday’s failure to launch, it remains to be seen if the program can deliver on its promises, or if it’s just overhyped.