His rulings in six previous cases can give us some idea. 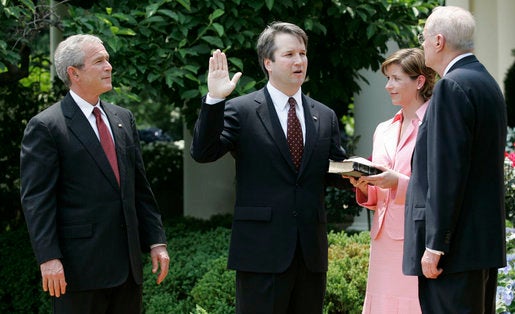 Swearing-in Ceremony for Brett Kavanaugh to the U.S. Court of Appeals for the District of Columbia. Oval. Rose Garden.
SHARE

On Monday, President Donald Trump announced his pick of Brett Kavanaugh to replace Justice Anthony Kennedy on the Supreme Court. Kavanaugh sat on the D.C. Circuit Court of Appeals for 12 years after he was appointed by President George Bush.

Over his tenure, Kavanaugh’s rulings often favored industry and opposed government agency rules like net neutrality. Although his written opinions frequently acknowledge the importance of climate change policies, he’s a stickler for leaving legal decisions up to Congress. We looked through Kavanaugh’s record to see where he’s come down on major science-related rulings.

Weighing in on air pollution across state lines

Back in 2012, the Environmental Protection Agency called for 28 states to reduce their smog emissions, which are liable to drift across state lines. The fumes carry pollutants like sulfur dioxide and nitrous oxides that cause serious health problems. In his majority opinion, Kavanaugh struck down the emission rule on two accounts. His first complaint was that the restrictions went too far by requiring polluting states to reduce their emissions beyond the extra dose wafting over downwind states. Kavanaugh also wrote the EPA didn’t give offending states enough time to implement their own reductions plans.

Money should factor into government decisions to regulate emissions

When the EPA set emissions limits for mercury and other pollutants belching from oil- and gas-fired power plants, the regulations came with a hefty price tag—an estimated $9.6 billion each year. A case made its way to the D.C. Circuit Court in 2013, appealing the regulations. The suit was overturned, but Kavanaugh wrote a dissenting opinion, arguing that the EPA should at least consider the financial costs when deciding to impose new regulations. “To be sure, EPA could conclude that the benefits outweigh the costs,” he wrote. “But the problem here is that EPA did not even consider the costs.”

In one 2013 case, a district court judge agreed the NSA’s collection of phone records was likely a violation of the Fourth Amendment. But the case was frozen and Kavanaugh denied requests to rehear the case.

“In my view, the Government’s metadata collection program is entirely consistent with the Fourth Amendment,” Kavanaugh wrote. The amendment only bars “unreasonable searches and seizures,” so the government aggregation of data was reasonable, he argued. Kavanaugh also said the protection of national security trumped individual rights to privacy in this case.

Limiting the reach of the Environmental Protection Agency

The EPA announced new regulations limiting carbon dioxide emissions from power plants in 2015. The policy meant each state would have to construct a plan to cut emissions—like abandoning coal-fired power plants—or the EPA would design a scheme for the state.

The plan caused uproar, prompting 28 states to file a lawsuit, West Virginia v. the EPA. Hundreds of unions, trade associations, and utility companies across the country filed petitions for review.

Kavanaugh commended the law’s efforts to manage climate change. “The policy is laudable,” he was reported saying during court arguments in 2016. “The earth is warming. Humans are contributing. I understand the international impact and the problem of the commons.”

But ultimately, Kavanaugh said that environmental policies should be mandated by Congress, not a government agency.

Manufacturers can use greenhouse gases in their products

Kavanaugh struck down an EPA rule from 2015 that restricted manufacturers from using certain greenhouse gases in products like spray cans, air conditioners, and refrigerators. At stake was whether the EPA could mandate the replacement of hydrofluorocarbons—molecules thousands of times more powerful at trapping heat than carbon dioxide. The legislation was a big push by the Obama administration to address climate change. Kavanaugh wrote that he might be sympathetic to the policy’s goals, but the EPA had overstepped its authority. That’s because the department used the Clean Air Act to justify its ban, which called for manufacturers to forgo ozone-depleting chemicals—not greenhouse gases.

Not in favor of net neutrality

In 2015, the FCC approved the policy, which was put in place to ensure free, open access to the internet. Basically, the organization advocated for all data online to be treated equally, free of government and corporate control. In his dissenting argument, Kavanaugh stated the net neutrality rule is “unlawful and must be vacated.”

His main gripe was the lack of Congressional approval—Kavanaugh argued that “major agency rules of this kind” must be authorized by Congress, and the FCC was never granted authority to issue such a policy in the first place. He also maintained the order was a violation of the First Amendment because it “infringes on Internet service providers’ editorial discretion.”