Lab-grown algae might help save corals from climate change

Researchers are looking for a way to buy time for reefs. 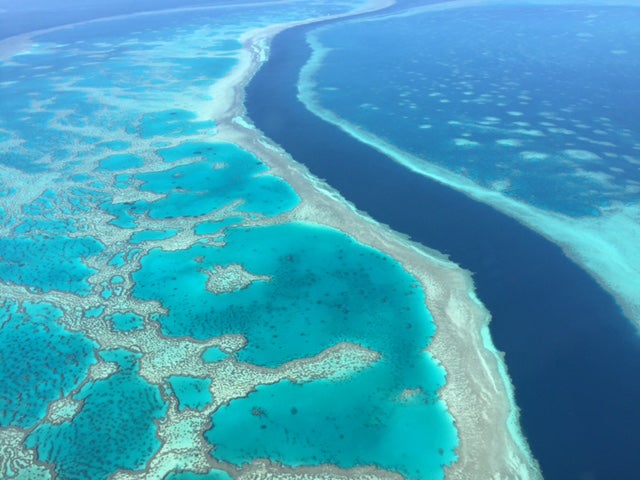 Hardy Reef in Queensland, Australia, which is still healthy and vibrant. The Commonwealth Scientific and Industrial Research Organization (CSIRO)
SHARE

Coral reefs are in trouble. In April, Australian scientists reported that the Great Barrier Reef was suffering from another large-scale coral bleaching episode—the third in five years. This year’s bleaching appears to be even more widespread than those caused by marine heat waves in 2016 and 2017, which halved the coral cover across the reef.

The trend exists worldwide, paralleling the increasing intensity and frequency of marine heat waves. Even if we could stop our greenhouse gas emissions today, corals would face a precarious future, in which a jump in temperature of just a couple degrees could destroy vast numbers of these creatures. That’s why some marine biologists are looking for ways to buy these organisms some time. And one way to do that might be to enhance their symbiotic algae, as a new study in Science Advances finds.

Corals are actually tiny animals, little polyps that are cousins of jellyfish and anemones. The rocky, branching, and brightly-colored structures that form the foundation of vibrant reefs consist of thousands of these polyps secreting a hard calcium carbonate skeleton. Their color derives from algae that live in their cells, called zooxanthellae. The algae not only give corals their flair, they provide them with food in the form of sugars produced from photosynthesis. Corals, in exchange, give the zooxanthellae shelter and carbon dioxide.

But this marine partnership is dissolved in heat waves. When temperatures get too hot, photosynthesis in the algal cells breaks down, and they start to produce toxic molecules called reactive oxygen species. The algae exit the corals, leaving behind white skeletons—this is coral bleaching. If the water stays warm for long enough, the corals starve and die.

Madeleine van Oppen, an ecological geneticist at the University of Melbourne, is leading a project to see if this symbiosis can be enhanced to save corals from this fate. In the new study, she and her team took a sample of zooxanthellae and separated it into 10 tanks in a laboratory. Over four years, they grew the algae in warm water, held at 88ºF. Over this time, each vat of algae unwent about 120 asexual generations. Each of those cell divisions represented an opportunity for mutations, and, potentially, new advantageous traits.

When the research team compared these 10 lab strains to two wild strains, they found they were more resilient in higher temperatures. At 88ºF, the heat-evolved algal cells continued to multiply, while the wild ones decreased.

Next came the big test: can these heat-tolerant algae benefit corals? The team inoculated baby corals with both lab and wild strains to find out. Out of all the algae, three strains—all from the four-year treatment—stayed in symbiosis with the corals over seven days in warm water, effectively increasing the corals’ bleaching tolerance. “These results are encouraging,” says Christopher Wall, a coral biologist at the University of Hawai’i at Mānoa who was not involved in the study. “They show that some corals … have the potential to gain heat tolerance by associating with specialized symbiotic partners.”

When van Oppen genetically tested one of the three algae that improved coral heat tolerance, she found clues as to how they were able to do this. This algal strain seemed to have slowed down its photosynthesis rate while increasing the activity of genes that fix sugars from carbon dioxide. Van Oppen says when photosynthesis rates are elevated at high temperatures and in bright light, the cells produce lots of the toxic oxygen molecules. “By compensating for that [reduced photosynthesis] by increasing the rate [the algae] can fix carbon,” says van Oppen, “we think the algae are still good symbionts—still highly productive and able to contribute sugars to the coral.”

In the same algae-coral combination, she found that this evolved algae also enhanced the coral. Van Oppen found that in the coral, genes that encode for heat stress tolerance were more highly expressed. “The algae must release some compounds that actually have an effect on the genes that the coral expresses,” she says. “We think that this prepares the coral to respond faster to summer heat waves.”

The results can help biologists understand the potential for inoculating corals with specialized algae to help them weather bouts of warm temperatures, says Katey Lesneski, a marine biologist focused on coral reef restoration at Boston University who was not involved in the study. “It definitely is a huge leap in allowing us to better understand the ability for these algal strains to undergo such evolutionary changes over four years, as well as helping us to better understand the fact that corals can indeed benefit from strains like this,” Lesneski says.

However, before we can go spraying lab-grown algae on the Great Barrier Reef, there are additional questions scientists need to answer. Lesneski says it’s possible that although the heat-evolved algae can strengthen the coral against heat, the zooxanthellae might be weaker in other aspects, such as disease resistance. Van Oppen also adds that her team needs to test whether the symbiosis holds in adult corals, not just the baby polyps they tested in the lab.

If all goes well, marine biologists may have a new tool to help buy coral reefs time while the world gets its act together on climate change. Van Oppen envisions large aquaculture facilities in which corals are bathed in the lab algae, and then used to re-seed reefs that have been devastated by heat waves.

But, van Oppen stresses, this method would never replace addressing greenhouse gas emissions. “If we don’t address climate warming, even assisted evolution, … those interventions are not going to save corals in the long run,” she says. “But we feel that in the interim, we need some of these additional approaches … to ensure that enough corals will survive within this century until the world deals with climate warming.”