Do I have a cold or the flu?

One infectious illness comes on slow, the other hits you like a truck. 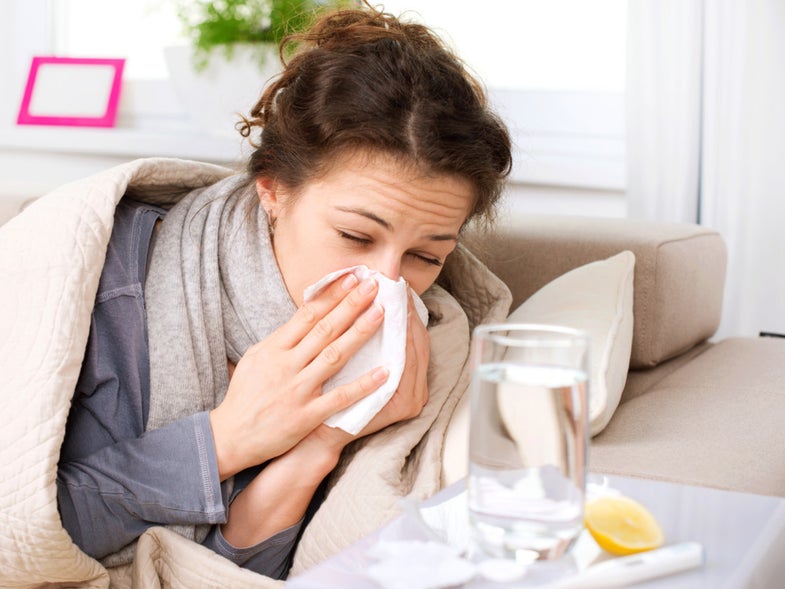 Fall is upon us, and that means the kids are finally back in school and the hot, humid summer days are all but behind us (hopefully). But the cooler air also signals the start of the inevitable cold and flu seasons that run rampant through close-packed classrooms, and circulate back out to parents and coworkers. When the sneezes start, though, they can set off a moment of panic—is this just an average cold-weather cold, or the more serious flu?

One of the biggest differences between the two viral infections is how fast the sickness sets in, says Cynthia Benson, the assistant medical director of the emergency department at Overlook Medical Center in New Jersey. With a cold, someone might wake up with a bit of a sore throat and runny nose, and slowly start to feel worse over the course of a day or two. The flu, on the other hand, has a fast onset. “You’re fine when you go into work, and by lunch, you’re really sick,” Benson says. “You feel like you get hit with a ton of bricks.”

Some of the symptoms do overlap—the sore throat, the stuffy nose—but a cold tends to be concentrated in the upper respiratory system, with sneezing and watery eyes. The flu is less likely to come along with a runny nose, but instead will cause muscle aches and chills. Depending on the particular strain of the flu circulating, it can also cause an upset stomach or diarrhea. The real hallmark of the flu, though, is a high fever, Benson says. A cold might cause a low grade, borderline fever, she says, but with the flu, body temperature spikes.

Can you diagnose yourself?

Adults usually know when they have the flu, as opposed to a run-of-the mill cold, Benson says. “People know themselves. They can differentiate between feeling just crappy and run down, and having the flu,” she says. Benson says there tends to be more incorrect self-diagnoses of the flu when it’s a particularly bad season: People have colds, but are more likely to be worried that they have the flu.

For kids, though, it can be harder to tell what virus is causing their sniffles. Babies and toddlers can’t necessarily identify what they’re feeling. Kids tend to have more nausea when they’re sick, both from a cold or from the flu. “That’s why we tend to do more flu testing in those ages,” Benson says. The flu is particularly dangerous for young kids, who can become dehydrated quickly and suffer more complications, so it’s more important to know for sure if they have it. Keep an eye on their breathing patterns and activity levels if they start to seem ill, Benson says. “A two year old who is listless, and has decreased energy—that should be a big red flag the child is really sick.

For healthy adults, the flu and colds can generally be treated the same way—with hydration, over-the-counter medications, and rest. Taking Tylenol (brand name for acetaminophen) or another non-prescription analgesic like Advil or Motrin (both ibuprofen) to bring down a fever can also help cut down on the misery of a flu. Keep an eye on the active ingredients in your medications of choice, though: many contain acetaminophen, which can be toxic to the liver at high doses. Doctors and pharmacists can help with cold medicine selection, and field questions or concerns.

Benson also says that flu-sufferers should stay home, at least for the first few days. “[The flu is] not the kind of thing you should push through,” Benson says. “You expose other people, and it makes it harder to recover.”

Even if someone just has a cold, if they can, they should stay home from work for the first day or so, she says. “If you take off the first day of [a] cold, you will probably get better a little faster,” she says. The first few days of any illness are also when you’re most contagious, so staying in bed can help protect those around you.

The best treatment, though, is to prevent sickness from striking in the first place. “Hand washing is key,” Benson says. “As kids go back to school, I’ve seen more and more parents in with upper respiratory infections. Hand washing is super important if someone in your household comes down with a sickness. I tell them to wash hand towels, change out toothbrushes.” Stay away from people who are already sick, and don’t share cups and utensils.

And most importantly, Benson says, get a flu shot. “Vaccination, vaccinate, vaccinate—I can’t say it enough.”