Believe it or not, you’ll actually love watching this video of leaping maggots

These maggots jump 30 times their body length and it is magnificent. 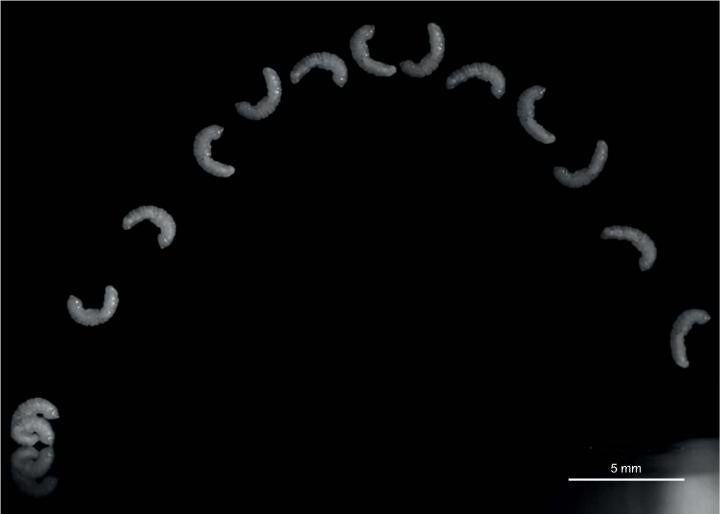 Step aside, human gymnasts: a tiny, legless maggot has put you all to shame. Look upon the majestic somersaults of Asphondylia and despair. She is beauty. She is grace. She is catapulting herself away from danger, flying to distances up to 30 times the length of her own body. That’s several times the relative distance of our own species’ record-breaking jumpers, accomplished at acceleration rates tens of times faster than other leaping legless insects.

The fact that gall midge larvae are born acrobats is no news to the people who study them. The insects lay their eggs on goldenrod plants and prompt those hosts to make swollen growths called galls. Ideally, young Asphondylia maggots (of which this leaper is just one as-yet-unnamed species of many) stay safe and cozy inside the botanical tumors, which shelter them and give them something to chew on while they grow. Some gall worms will jump down and burrow under the ground to finish developing, but this species prefers to emerge from its nursery as a proper midge ready to take flight. It’s only when they’re disrupted by some outside force—a curious scientist, for instance—that they unleash their fantastic aerial feats, catapulting themselves away from the source of their eviction.

In fact, it took the authors of a new study on the wrigglers three years to properly catch them in the act. Michael Wise, a Roanoke College biologist who thinks this all “borders on the fantastical,” had only seen a handful of examples in the course of cutting open thousands of galls. He thought his grad school colleague Sheila Patek, who runs a lab specializing in interesting locomotion at Duke, might enjoy trying to capture these brief and rare flights with her research group’s 20,000-frames-per-second video camera and scanning electron microscopes. But Asphondylia are only at the proper stage of development to perform these jumps for a brief period during August each year, so the researchers had a tight window during which to observe them. After years of hunting down just-mature-enough maggots and honing in on techniques for capturing the tiny insects on camera as they sped into the air, Patek’s team finally got the footage they needed to break down the marvelous mechanics.

So how does a squishy little larva with no legs—described by lab manager Grace Farley as “like a little puff Cheeto”—hurl its 0.1 inch body nearly 5 inches in just 2.5 seconds? One crucial element is a sort of virtual leg, which the maggots create momentarily by bending themselves into rings. Fluid builds in the tail-end of the loop, creating pressure as that portion of the body swells. When this energy releases, it’s as if the larva has a leg to spring itself up with. But with a closer look, Patek and her team saw something even more interesting at work: to build up all that tension, the larvae have to be able to stick their top and tail end together. It’s when that bond finally breaks that the worm-like creatures go flying. Examinations with an electron microscope revealed itty bitty ridges on the spots that do the sticking. These might work like velcro, or they might use properties similar to the ridges on geckos’ feet, but they’re almost certainly key to the process. And what a process it is: According to analysis from co-author Greg Sutton of the University of Lincoln, the maggots would have to use 28.75-times as much energy to travel the same distance by crawling. That’s the difference between jogging for a mile and change and doing an entire marathon. The species doesn’t take advantage of this cost-effective means of transport very often, because they generally stay inside their cozy galls until they’ve got wings. It’s likely just an evolutionary holdover from a time when they spent more of their lives on the ground, as some of their close relatives do, but it’s surprising that such a proficient jumper would wind up doing away with the need for speedy leaping.

For now, all we know is that this species of Asphondylia is a mechanical marvel. This one definitely gets a 10/10 from the PopSci judges.