In loving memory of Jeremy, the one-in-a-million mutant snail

Find me somebody to love. 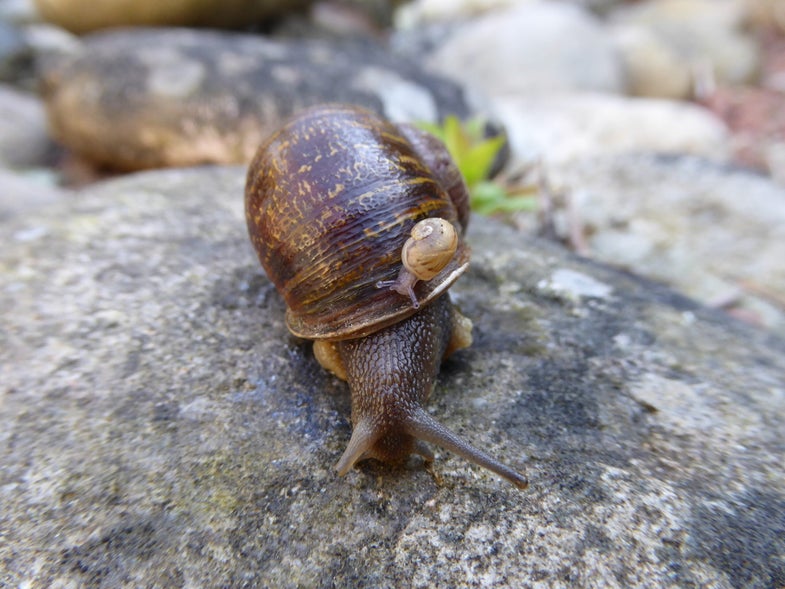 Jeremy, we hardly knew ye. Plucked from obscurity amongst the rotting peels of a London compost heap, thrust into the spotlight in a bold bid to find somebody to love, this garden snail twisted its way into all of our hearts—counterclockwise.

Scientists found the “lefty” hero dead in a refrigerator last week. The hottest love has the coldest end, as Socrates once said (according to Goodreads). The snail had been sluggish in days previous, according to the University of Nottingham’s Angus Davison, and had been popped into the icebox to hibernate.

“I should have put Jeremy in the freezer to preserve his DNA on Friday, but I thought so many people will be sad if Jeremy is no longer,” Davison told The New York Times. Alas, by Wednesday the gastropod had started to decompose. “I didn’t do that, and it was a mistake.”

But let us not remember Jeremy as a clump of deconstructed snail goo. Let’s remember them as they were: a one-in-a-million mutant; a snail with a truly unique twist. A genetic mutation gave Jeremy a shell that twisted in the opposite direction.

That snazzy shell came at a price: the inability to mate with 99.9999 percent of the species. The genetic quirk that made Jeremy run counter to everything most snails hold true also swapped the direction of their internal organs—and genitalia. But Davison wouldn’t let his research subject languish alone. He sent out a passionate plea for the owners of other lefty snails to come play matchmaker with him. All snails are hermaphrodites, of course, so any lefty snail would do.

Alas, Jeremy’s plight was not so easily resolved. Placed in a perfect love nest with fellow mutants Lefty and Tomeu, Jeremy was still a snail apart: the two mated with one another repeatedly instead of turning their sights to the lonely bachelor(ette). Oh, what twisted webs we weave.

But we can happily report that Jeremy is survived by around 19 offspring. We’re not actually sure how many, because it’s likely that only around a third of the 56 eggs recently laid by Tomeu were actually Jeremy’s. The rest are added to Lefty’s growing brood, because fate is cruel. But the right-coiled shells of these babies and their half-siblings bring scientists closer to solving the twists and turns of Jeremy’s mysteries. It’s a recessive gene that causes the counterclockwise twist, so scientists think that a snail “mother” (either parent can play this role, given their dual equipment) with a left-handed snail must also be packing a dominant gene. Scientists say it’s likely that some of Jeremy’s grandchildren will be southpaws, and they’re eager to find out.

Even if Jeremy hadn’t successfully mated before shuffling off this mortal coil, the snail’s death would not be in vain. Davison’s passionate plea for a playmate for Jeremy provided scientists with a wealth of potential study subjects. “Although it is unfortunate that Jeremy has gone, the help that we have received from the public has been amazing,” he said in a statement. “Because of the rarity of lefty garden snails, we have never before been able to get two lefty snails together to study the inheritance of the condition. Through the appeal that on BBC Radio 4, which then went out worldwide, we ended up finding six other lefty snails. This would not have been possible without the public’s help.”

Goodnight, sweet prince(ss). Your body may be gone, but your lonely heart—and your shell—are still with us.