Whatever your weather’s been like this week, you can probably expect the opposite for the rest of winter 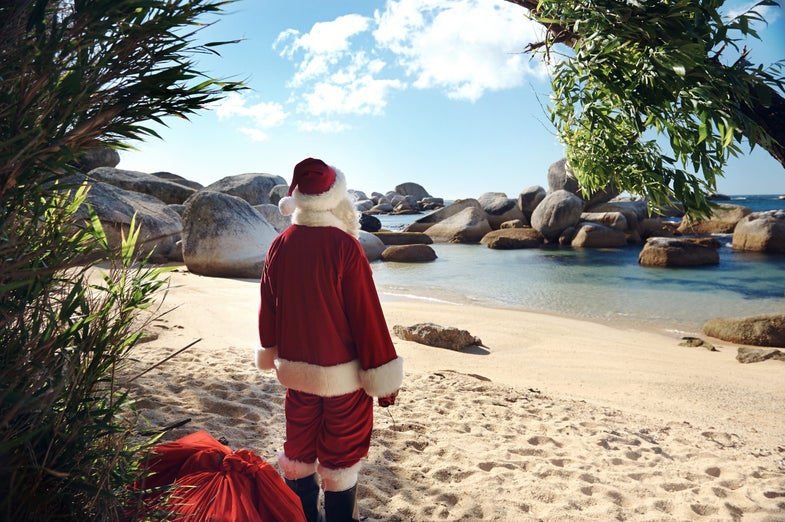 If you live in the eastern U.S. and love having those four distinct seasons, you’re probably hoping this past week was a harbinger of a truly wintery winter, unlike last year. Sorry, but you should enjoy your current weather while it lasts. It won’t be chilly for long.

Right now, it’s colder than average in the eastern United States and bits of the Midwest, and warmer than average in most of the the West. A block of air over the North Pacific allowed cold air to push south, making for unseasonably frigid temperatures just after a strangely warm autumn. The Southwest is really the only area with consistency: it’s been hotter than average, and it’ll stay that way.

The cold weather in the Northeast is going to continue through Thanksgiving, this time because of the Greenland block (which you can read more about here). Unfortunately, that may be the only truly cold holiday we get this year, at least in most of the country. Here’s what the National Oceanic and Atmospheric Administration (NOAA) predicts we’ll see for the next 6-10 days:

You can see the trend moving toward warmer temps, so the forecast for the rest of the winter shouldn’t come as too much of a shock:

Where once it was frigid in the East and warm in the West, we now have a chilly North- and Midwest, plus a warming … entire rest of the country. This is due in part to climate change, but we’re particularly prone to a green Christmas because it’s a La Niña winter.

La Niña is basically the opposite of an El Niño weather pattern. It happens when the surface waters of the Pacific Ocean are unusually cold, causing the air above to be quite dry. That cool air sinks and prompts the polar jet stream to dip downwards over the U.S., bringing that blast of chill to northern areas. This also disrupts the Pacific jet stream, which would normally cool down southern (and sometimes eastern) states. Without it, those parts tend to be warmer than usual.

NOAA predicts we’ll have a weak La Niña year, meaning the change in weather patterns won’t be all that strong, though it may develop into a borderline moderate year. We won’t really know until we’re deeper into the season and have more climate data.

If you’re still holding out hope for brisk weather, your best bet will be in January. Stephen Baxter, a meteorologist at NOAA’s Climate Prediction Center, says it’s still speculative, but that the data suggest January will be the coldest of the winter months given our current climate.

Then again, like almost everything to do with the weather, none of this is certain. Trying to forecast short-term changes—unlike predicting long-term trends in the climate—is still one of the hardest things we do in the scientific world. But we’re getting better. In the meantime, enjoy the cold (or, if you’re reading from the Pacific Northwest, enjoy the warmth!) while it lasts.