Nature comes in all colors 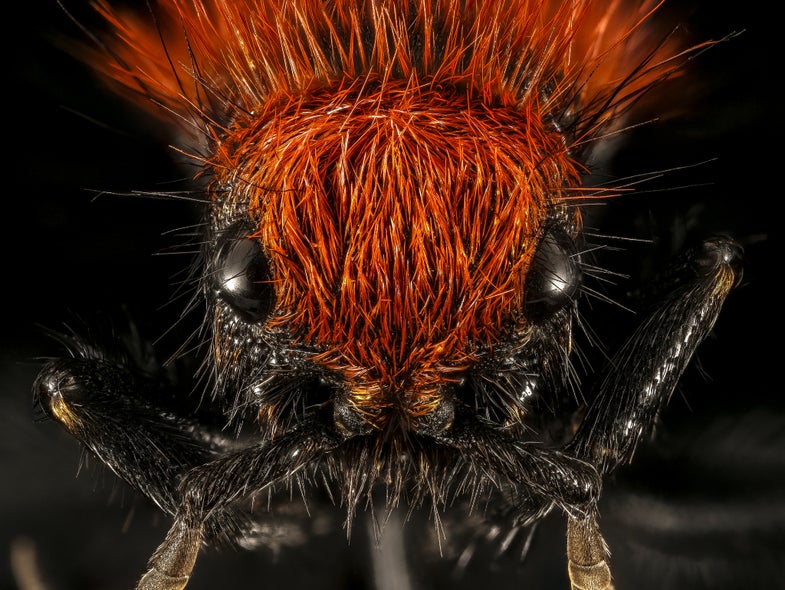 Velvet ants aren't the only bugs to come in a rainbow of colors. Sam Droge USGSBIML
SHARE

Flowers are fantastic, rainbows are ravishing, but bugs are often neglected as being creepy and crawly, when in reality they’re remarkably colorful. Enjoy scrolling through a rainbow of bugs.

This Chlamisine chrysomelid looks like it crawled out of red hot lava and just kept going. This leaf beetle was collected in Cuba near Guantanamo bay in 2011.

The neon-bright orange color here comes from the pollen of Arizona poppies. The bright color attracts bees like this Protoxaea gloriosa. Bees gravitate towards vibrantly colored flowers, where they gather nectar and pollen.

This male digger bee (Anthophora californica ) from California has a bright yellow face. It looks like a wasp, but is actually a bee. Digger bees get their names because the females dig their nests in the desert soil.

This lime green bee is from the genus Osmia and was found in San Francisco. Bees from this genus are known as mason bees and often use clay or mud to construct the interior of their nests.

Exaerete smaragdina is a parasitic orchid bee that was collected in Costa Rica. These bees collect oils from orchids to attract mates, but they have a dark side too. They steal the nests of other bees, killing off rival eggs in the process.

It might be a stinkbug, but this beetle is stunningly beautiful. This species–Stiretrus decemguttatus–comes in an unbelievable array of colors, including this beautiful indigo. Beetles like this one eat leaf beetles like the red one seen above.

This vibrantly violet orchid bee of the genus Euglossa came from Guyana. As the name implies, it helps pollinate orchids. Unlike the blue example above, this bee is not parasitic.

The black onion fly (Tritoxa flexa) lives in North America. Its distinctive stripes make this species easy to spot. It can feed on nectar, but is also often found near garlic.

The Thistledown Velvet Ant—Dasymutilla gloriosa—isn’t an ant at all. It’s a wasp. These strangly hairy insects have a sting that’s only mildly toxic, but immensely painful, causing predators to steer clear.