Bacteria Pipe Food To Each Other Using Tiny Tubes

If only I could make my neighbors feed me so easily 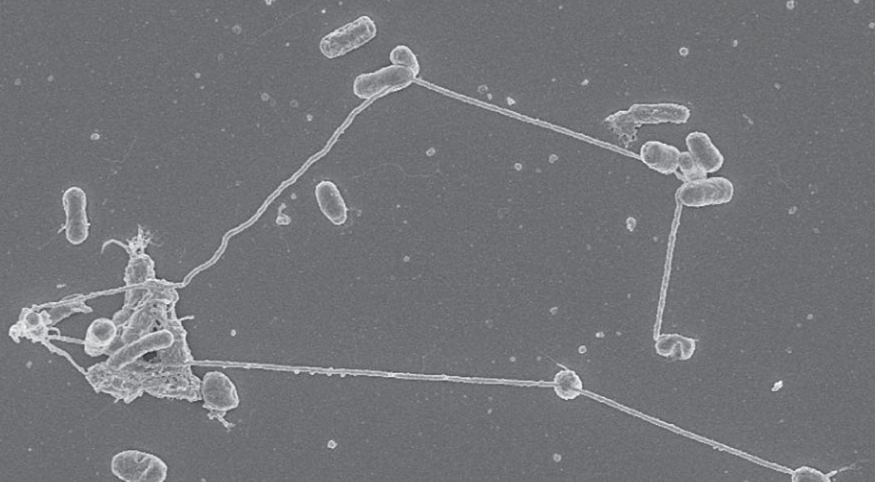 Throw me a line here! Or how about a nanotube? In a new study, biologists discovered that hungry E. coli bacteria are able to request food from their neighbors by sending a tiny tube over to them. Other E. coli bacteria, or even bacteria of a different species, respond by piping nutrients into the tube, over to the requester. Efficient!

Biologists have long known that different microbes living next to each other can trade nutrients. Usually, it’s thought the exchange happens through diffusion: Bacterium A releases a bunch of Nutrient A into the water around it. Nearby, Bacterium B gobbles up Nutrient A from the water and maybe even releases some Nutrient B that Bacterium A can use. Such methods are open to thieves, however. What if Bacterium C swoops in and eats up all the Nutrient A?

The newly discovered E. coli‘s strategy prevents thieving. It’s also one of only a few examples biologists have ever observed of microbes exchanging stuff via tube. Perhaps tubing is actually a common bacterial survival strategy, the research team, based at different universities in Germany, wrote in a paper published yesterday in the journal Nature Communications.

Sadly, however, not all bacteria species are able to request help via tube. In the German team’s experiments, E. coli were able to ask for nutrients from bacteria of an unrelated species, Acinetobacter baylyi. The requester E. coli also provided A. baylyi with nutrients as needed, presumably through the same nanotube. A. baylyi alone, however, didn’t seem to exchange nutrients with each other, even when they were suffering from a lack of certain nutrients that other A. baylyi had access to. A. baylyi also never made nanotubes.