Ask Anything: Can Humans Smell Fear?

Short answer: It’s up for debate. 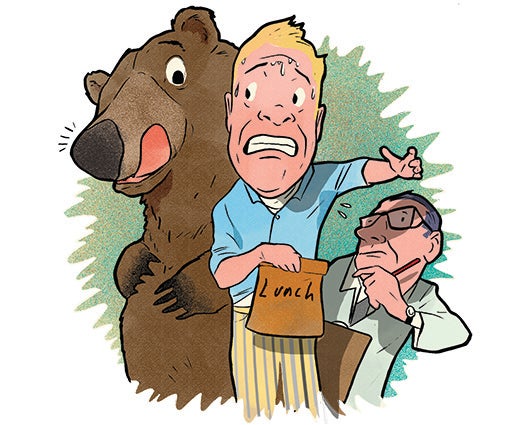 If humans can indeed smell fear they wouldn’t be unusual in the animal kingdom. Sea anemones, earthworms, minnows, fruit flies, rats, mice, and deer, among others, have all been shown to signal unease through odor. Some responses are even more overt. For example, the offspring of one bird species vomits up a pungent, orange liquid when frightened by a predator; if a parent catches a whiff, it becomes warier in the nest.

From an evolutionary perspective, a silent signal makes sense. “If you find yourself in a fearful situation, you might want your cohorts to know about it, but without calling attention to yourself by screaming or jumping around,” says Charles J. Wysocki, of the Monell Chemical Senses Center in Philadelphia. The same could hold true for humans. “Primates have become much more visual creatures [over time],” he says, “and I suspect that smell in general, including the perception of the fearful notes, have taken second place. But they’re still there.”

There’s only modest evidence for a smell of fear in people, though. No one has yet found a molecule in human sweat that corresponds to our level of anxiety. Several labs have tried to measure the effects of sniffing someone else’s fear-inspired body odor. First the scientists show people scary movies, and then they collect the subjects’ sweat from cotton pads placed in their armpits. When other people smell the cotton, they respond in subtle and unconscious ways. In one experiment, the smellers became more likely to judge ambiguous facial expressions in photographs as portraying fear. In another, they made fearful expressions of their own. A third found that fear-sniffing subjects blinked more forcefully and seemed more prone to being defensive.

These studies have some big problems. Sweat born from emotion does seem to have a different smell than sweat from exercise. But that doesn’t tell us whether fear-related sweat works differently from, say, happiness-related sweat or the sweat that comes from sexual arousal. “We’re using very crude techniques to study this,” says Denise Chen, a pioneer in this field at the Baylor College of Medicine. Among the limitations of the work is the fact that emotions can be hard to regulate in the lab. “It’s very easy to scare people,” she says, “but it’s not so easy to make them happy.”

Hygiene products pose another problem. The researchers must find subjects who are willing to forgo deodorant for several days before each study. “That’s hard to do in this country because people are so hygiene-conscious,” Chen says. It also raises the question of whether any of this research would even matter in a real-world setting. Given all the fragrances we dab onto our bodies, any signals that sweat might contain would be undetectable.

Or maybe not. Wysocki says there’s evidence that certain people can detect body odor even when masked. He tested about 40 common compounds used to cover smells and arrived at a surprising result. “It’s fairly easy to block the body odor of women in the noses of men,” he says. “But when it came to women, only two of the [masking] compounds were effective.”