Left To Their Own Devices, Robots Evolve Into Diverse Populations

What some squirrel-sized hermaphrodite robots can tell us about evolution 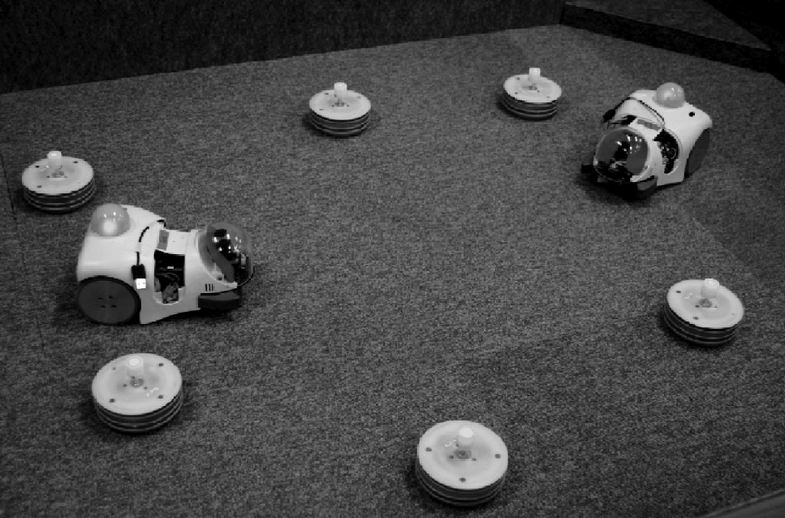 There are a few different ways you can study evolution. You could live for months at a time in a tent on tiny island with an isolated population and no fresh water. Or you could program a computer model and some squirrel-sized robots to act out a thousand generations of sex and death in the comfort of your own lab.

Two researchers from the Okinawa Institute of Science and Technology recently chose the latter option. With their model and robots, they were able to demonstrate how two different mating strategies arise in one population. Upon first glance, you would think that “survival of the fittest” would eventually create one optimal strategy. That doesn’t always happen, of course. Individuals within certain animal species are known to employ different mating strategies. Take the North American sunfish, for example. Some sunfish males build nests and care for their young, while others don’t build nests and fertilize other males’ clutches of eggs instead, leaving the other guy to care for his young. What a cad.

Among some of the experiments the Okinawa researchers conducted, the fittest population really did all converge on one answer. But in other experiments, a diverse population arose with a three-to-one ratio of little robots with two different mating strategies. There are many ways of answering the same question, it seems.

So what does a robot have to do to survive in an Okinawa evolution lab? Let’s first look at what the robots were working with:

The researchers put these little robots on a stretch of floor space scattered with round batteries—”food sources”—where the robots could charge up. The researchers also programmed the robots to make decisions based on different factors, such as how much energy they had, how far away the nearest battery was, and how far away the nearest face or tail-lamp of another robot was. (The robots mate face-to-face.)

At any given time, each robot could choose to forage for food, wait around for a mate, or mate with another robot. The number of offspring each robot created after a mating depended on how much energy it had at the time it mated. The robots also passed on their preferences for food or love. By the way, the robots were, effectively, hermaphrodites; any robot could mate with any other, and they both were able to produce offspring after an encounter.

After 1,000 generations, the final robot populations had some combinations of Eaters and Lovers.

The researchers first performed their experiments using four robots. After that, they performed further experiments virtually, in a computer program, because they found studying 1,000 generations of life and death in physical robots “infeasible” (Boo!).

After 1,000 generations’ worth of experiments, the researchers found the final populations had some combinations of, let’s say, Eaters and Lovers. Eaters never waited for a mate to arrive. They would always choose to recharge themselves unless they saw another robot face (Well, if he’s right there waiting for me…). Lovers would sometimes wait for mates, depending on the situation. The experiments resulted in some populations composed predominantly of Eaters and some predominantly Lovers. Among the fittest populations, however, were those with a three-to-one ratio of Lovers to Eaters. One fit population even had sub-categories of Lovers, with some more strongly inclined to mate than others.

This study shows that robots are possible tools for studying evolution, the study’s authors wrote in a paper published in the journal PLOS ONE. The next thing they want to tackle is programming their robots to be males and females—that is, to take on different risks and costs with each mating encounter.