Elizabeth Kolbert On The Vanishing Of Species

Elizabeth Kolbert, author of The Sixth Extinction, talks with Popular Science's reporter about the prehistory and the present of mass species die-offs 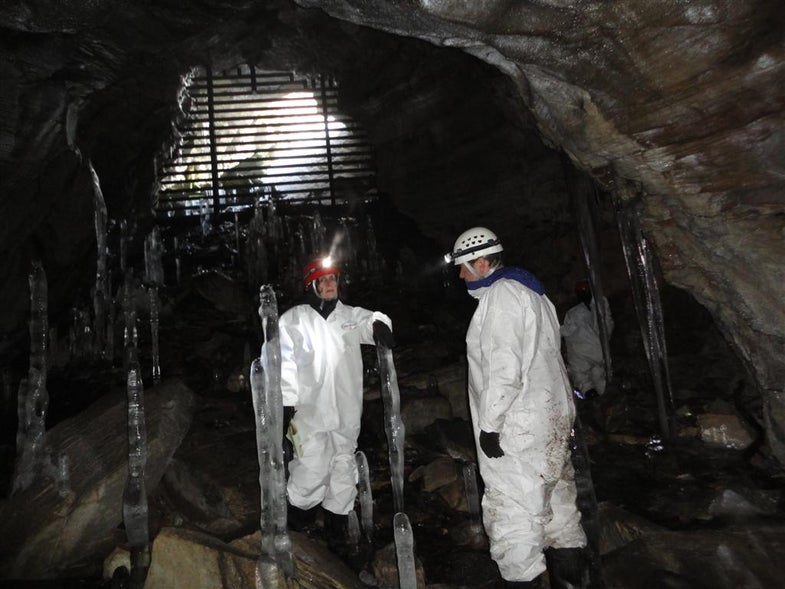 Elizabeth Kolbert writes about ecological disasters-in-progress with such perception and verve that readers come away wanting more. Al Gore recently described her as “a distinctive and eloquent voice of conscience on issues arising from the extraordinary assault on the ecosphere.”

As a staff writer at The New Yorker, Kolbert’s reporting focused for many years on global warming, work that culminated in 2006’s “Field Notes from a Catastrophe: Man, Nature, and Climate Change.” In her latest book, “The Sixth Extinction: An Unnatural History,” she takes on an even bigger story: mass die-offs of life on Earth. Geologists and geochemists have identified several “extinction events” in pre-history: losses of biodiversity so cataclysmic that they’re called the Big Five.

Kolbert covers the prehistory of mass extinction, science’s “discovery” of the concept as well as the facts, and contemporary events via 13 brisk chapters, each featuring an animal that is “in some way emblematic–the American mastodon, the great auk, an ammonite that disappeared at the end of the Cretaceous alongside the dinosaurs.” Contemporary species include the Panamanian golden frog, the Hawai’ian crow, the Sumatran rhino, and others. The last mass extinction event, about 66 thousand years ago, began when an enormous meteor struck the planet. In 2014, the catastrophe is us.

Popular Science: For such a downbeat topic, “The Sixth Extinction” is a great read. How did you manage that?

A lot of the history of science, many of the key discoveries of the last couple hundred years, have sort of bumped humans from the center of the universe. We figured out that the earth revolves around the sun, and not the reverse. We figured out that we are just one species that evolved like every other species on the planet. We were put in our place to a certain extent.

Now, all those things are certainly true. But part of the message of the book is that it does turn out that we are incredibly unusual in the history of life. We are just very very unusual creatures, for better and for worse.

PS: In our ability to transform our environment?

EK: Exactly. To affect every other living creature. We are at the point where we are affecting everything on the planet.

PS: The scope of your last book, “Field Notes From a Catastrophe,” was enormous. But you actually manage to fold climate change into “The Sixth Extinction” and make it just one part of another story, one that turns out to be even bigger. 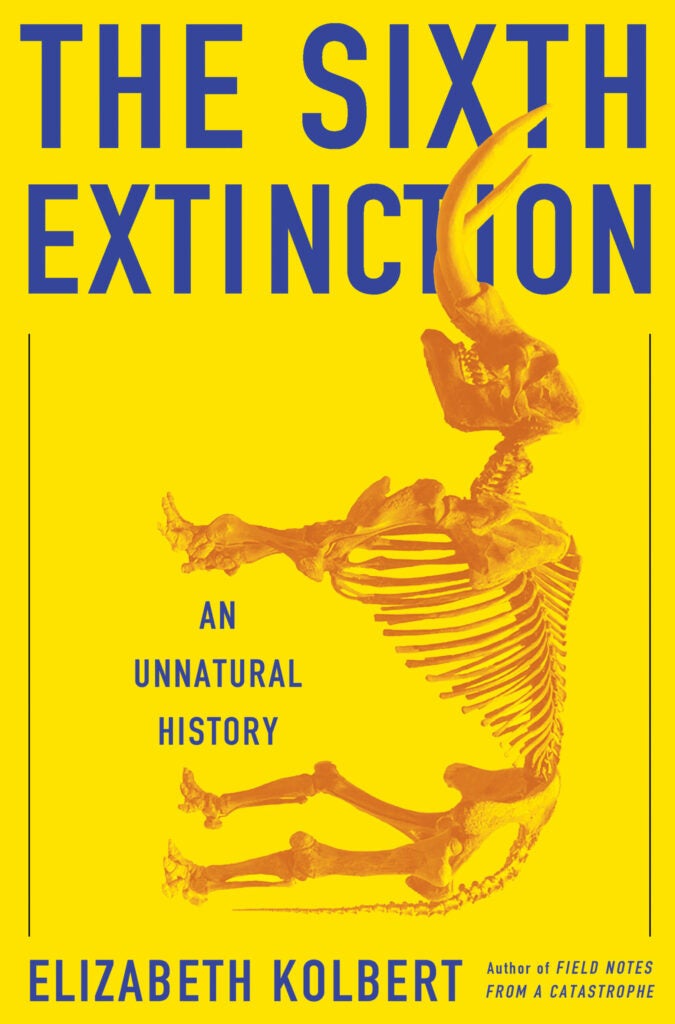 EK: I was really looking for a follow-up book, another book on climate change. But I kept bumping up against issues, for example, like ocean acidification, which is sometimes called global warming’s equally evil twin. And this is just one of ways in which we are changing the world on what you would call a geological scale, a permanent scale, ascale that will still be visible tens of millions of years from now, should there be any geologist around to look at it.

PS: You write about several extraordinary efforts to save endangered animals.

EK: I end the book with the story I really loved, of a bird I met. His name’s Kinohi. He’s a Hawaiian crow, which is a very critically endangered species. There’s maybe a hundred of them left in the world. All of them exist, except for Kinohi, at a breeding facility in Maui.

I should also point out that crows are very smart and can imitate human speech. Kinohi says “I know.” It sounds sort of demented when he says it, but he says it.

This story was an incredible encapsulation of a lot of the themes that I was trying to get at: The heroic efforts of scientists, and volunteers at the zoo, people who really put their lives into trying to save these species. And the tragic situation of actually being that animal, that species on the verge of extinction. The forces raging around them, Kinohi and his species, make it very, very difficult to even consider putting that species back in the wild.

PS: Early in the book you use the term “biosecurity.” When I hear that word, I think of terrorists trying to detonate dirty bombs in Times Square. What does it mean in terms of endangered species?

EK: Usually you’re thinking of bio-agents getting out. In this case what [scientists are] worried about is biological agents getting in. Scientists in Panama really rushed to rescue this very beautiful, bright yellow frog, called the Panamanian golden frog, as a fungal disease swept through Panama, a fungus almost certainly transported by people. They rushed to get these animals out of the wild and into some sort of breeding facility. They don’t want anyone bringing the fungus into this facility, so when you go, you have to take off your shoes [and] wear special shoes. Everything is bleached down very carefully. The frogs can’t leave because what is killing them is still out there.

PS: Are these scientists looking for ways to kill off the fungus in the environment?

EK: They are not, but some other people are. Some frogs seem to be able to survive this fungus, and there’s very intense work going on–though probably not enough work going on really, given the scope of the crisis–to try and figure out whether there are bacteria that certain frogs harbor that counter the fungus.

PS: It’s much like the situation with bats and white-nose disease that you describe later on.

EK: Yes, that’s a very similar situation, where you have a fungus that turns out to be pathogenic to, interestingly, a wide variety of species. People are interested in what we could do, [but] it’s very difficult to disinfect the massive areas where these animals are. And once the fungus is in the cave, similarly to once it’s in the rainforest, it’s going to be able to subsist with or without the animals. So that’s a very serious problem. The fungus can be killed in a lab; but it’s going to be hard to disinfect the world.

PS: When people try to explain the current wave of extinction, they often land on answers like “human population growth is the problem.” Or, “the growth of a global middle class is the problem.” Do you agree with either of those answers?

EK: I came to what I consider to be an even more sobering conclusion, which is that we’ve actually been at this project of of altering the world, in very significant ways that have led to serious extinctions, for quite a long time. People first arrived, for example, on Australia, fifty thousand years ago, [and] there was a wave of extinction. Those people were not the global middle class, let’s put it that way. The problem, unfortunately, turns out to be deeper than that.

Although, what we are going through now in terms of both rising population growth and rising consumption levels, clearly are accelerating the process beyond the wildest dreams of our distant ancestors.

PS: There’s a parallel story in “The Sixth Extinction,” of geologists and palentologists and naturalists, and their competing theories about life and death on earth. Who stands out?

EK: Georges Cuvier, definitely, is a major character in the book, the most famous person you’ve never heard of. He was the towering naturalist of his time, and everyone deferred to him at the beginning of the 19th century. He was really the person who came up what we would call the concept of extinction.

We owe a lot of of our vocabulary about extinct animals to him, because he named a lot of these species. He named pterodactyls, for example. He gave the mastodon its name. [But] extinction was just one of his contributions to science. He wrote an anatomy textbook that was the textbook for generations.

PS: Along with his amazing intellect, though, he could treat other scientists horribly when they didn’t agree with his ideas.

EK: He seems to have been sort of a bastard, yeah. This is based on reading secondary sources, but he does not come across as a nice guy. Though he was very generous to certain people–he married this woman who was widowed in the French Revolution, and he adopted her four children because he didn’t have any children of his own. People said he was very charming; he had this salon on Saturdays that was very famous, that a lot of people went to. But he was really vicious to [French naturalist Jean-Baptiste] Lamarck. He delivered this eulogy [for Lamarck] that’s famous because it’s so mean.

PS: Cuvier analyzed the fossil record with remarkable insight, making intellectual leaps that even a fairly expansive thinker for his time, like Thomas Jefferson, apparently found very difficult. How does that translate into the present day? What are our blind spots today?

EK: Cuvier not only discovered extinction, but he thought he’d found an explanation for extinction, which would be what he called “revolutions on the surface of the earth.” And that was discredited by [English geologist Charles] Lyell, who was sort of a mentor to Darwin. It really fell into this—you were considered a crackpot if you suggested that there were catastrophic events in earth’s history.

It wasn’t really until the 1980s and 1990s until that idea became acceptable again. And now it’s quite established that there are catastrophes in earth’s history.

But I think it’s very difficult for us, sitting here, to see that we could be in the middle of such an event today. I am speaking to you from the streets of Seattle, and everything seems to be absolutely fine and glowing and seems to be thriving. And where everything, I should point out, seems to be made of concrete.

PS: Have you encountered communities that seem ready to change their habits of living, to try and preserve biodiversity?

EK: That is not part of the book, but I did visit a community on a tributary of the Rio Negro in Brazil, a pretty out-of-the-way part of the world that you can only reach by boat. A tiny little community, where a group called the Sustainable Amazon Foundation was trying to convince people to stop illegal logging. And by paying people what we would consider a pretty modest stipend, was really cutting down on poaching and illegal logging, and getting people invested in the idea of preserving the forest.

It is a very moving thing to talk with these guys–I couldn’t talk with them directly because I don’t speak Portuguese, but it was translated for me–about how they’ve really changed the way they look at the forest.

PS: Where does science fit in to solving the extinction crisis?

EK: Science is really just a method of inquiry. It’s been codified and formalized in our society, but it’s just a way at trying to arrive at replicable truths. It can’t make decisions for us. We can’t ask of science or scientists that they solve these problems, which are big societal problems, for us. We, unfortunately, as a society and a democracy, have to step up to the plate–unless we want to hand over our government to a bunch of scientists or technocrats. Which might at this point not be a bad idea.