Watch The Inside Of A Cell Move In High Resolution Ever since the invention of the first microscope in the late 1500s, humans have been trying to see things normally invisible to the naked eye in order to better understand them. As technology has improved, we’ve discovered dozens of ways to glimpse the world on its tiniest scales, including finding new ways to capture the structures and movements of living cells. A video of some of a cell’s tiniest parts, which was achieved using a particularly high resolution microscope with increased aperture, was published in a study this past August in Science. It was touted again today on a blog written by Francis Collins, the director of the National Institutes of Health.

The video is a nanoscale view of the cytoskeleton, one of the outer parts of a cell that gives it shape. The red structures are actin filaments, fibers made of proteins that cause cells to move and contract; the green globs are clathrin-coated pits, structures that carry things that the cell needs, like hormones and signal receptors, from one vesicle in the cell to another. In the video, you can see the red actin fibers pulling the green clathrin-coated pits from the outside of the cytoskeleton towards the middle of the cell.

To make this video, the researchers used a special, high-resolution version of structured illumination microscopy (SIM). For living cells, SIM is a great option because it doesn’t destroy the sample and can capture a good image even if the subject isn’t totally still. SIM itself is extremely sophisticated, but its resolution has been limited because it relies on light that has been broken into several wavelengths by passing it through a slatted plate and angling it at the specimen. The researchers were able to record the video at a much higher resolution by increasing the aperture, or the opening of the camera, to allow more light to enter, and altering the wavelengths of the light sources to provide greater variation in those that hit the specimen. 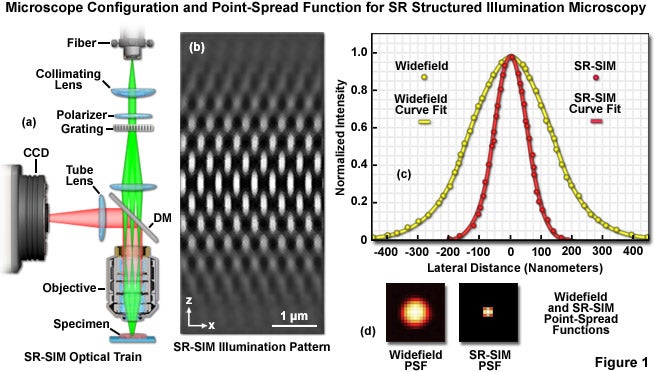 A graphic showing the function of superresolution structured illumination microscopy

The researchers tried the imaging technique on other parts of the cell, too, including the interaction between fibrous actin and the protein myosin, which performs a similar function to actin and is essential for muscles to contract. See it here:

According to the NIH Director’s blog post, the researchers hope to collaborate with biologists to help them better understand cell processes on the smallest scales with their high-resolution imaging technique.