The Sonos Ray is the cheapest and smallest soundbar in the company's lineup. 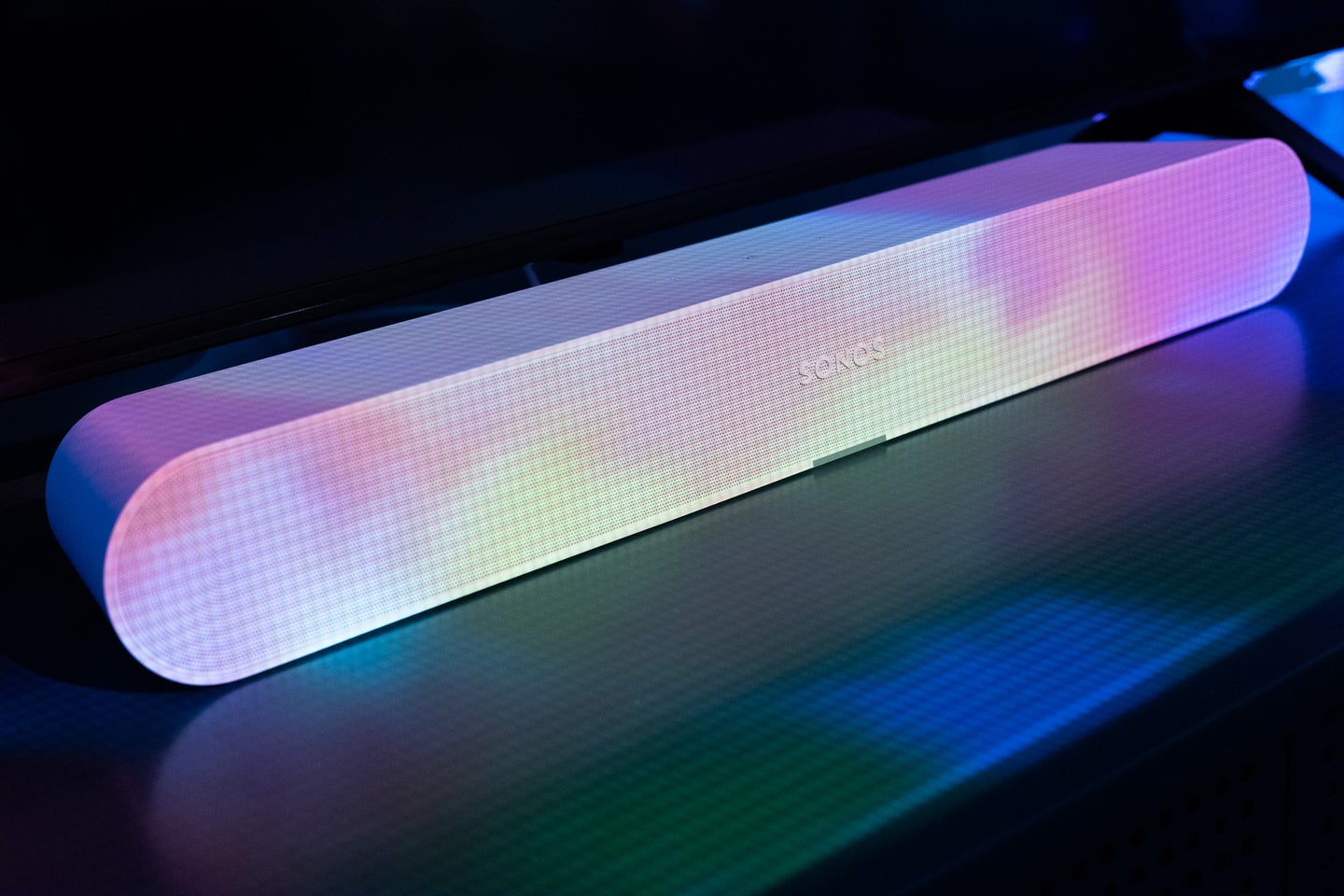 It comes in both white (shown here in a room full of wacky lighting) and black. Stan Horaczek
SHARE

Sonos announced the smallest, cheapest soundbar available in its lineup. The new Sonos Ray checks in at $279, which slides in under the $449 Sonos Beam (Gen. 2) and the $899 Sonos Arc. Unlike its bigger, pricier siblings, the Ray doesn’t have any simulated surround sound ambitions, opting to keep its entire speaker array front-facing. I got a chance to hear the Ray at an early press event in NYC before it goes on-sale June 7. And while it’s not the most feature–rich model on the market—even at this price point—it does appear to live up to the Sonos sound quality bar.

What is the Sonos Ray?

This is the littlest sibling in the Sonos soundbar family. The Ray stands 2.79 inches high, stretches 22 inches wide, and measures 3.74 inches deep. That width makes it more than 3 inches shorter than the Beam that sits above it in the lineup.

As stated above, all of the Ray’s drivers face forward rather than upward or downward. This arrangement hinders any ability it has to simulate surround sound, but it also allows the Ray to sit within a semi-enclosed TV stand without inhibiting its overall performance. Because it doesn’t do Dolby Atmos, the Ray connects to a TV, receiver, or other AV source via an optical cable instead of HDMI since it doesn’t need the extra bandwidth.

I spent some time with the Ray in-person and, at least at first impression, it lives up to the relatively lofty Sonos audio quality standard. At about 60-percent volume, it filled a roughly 8- by 12-foot room with plenty of sound with no discernible distortion. If you have a huge room, however, I could see it feeling underpowered.

Despite its size and lower price, Sonos still included a number of its advanced features. Trueplay adaptive tuning adjusts the frequency response to the acoustics of your space. Listeners can enable the dialog enhancement mode as well as Night Mode, which tones down content’s loudest sounds like explosions without dropping the overall volume too low to tell what’s going on.

The Ray can sync with a pair of other Sonos speakers that can act as rear channels and a subwoofer to provide some surround sound functionality. Since Sonos One speakers cost $199 on their own—most of the cost of the Ray itself—it’s definitely not the most economical way to get a surround effect.

Obviously, it ties into the Sonos wireless whole-house system, with support for AirPlay 2 and Spotify Connect, etc. That allows you to send music from room to room or sync up the entire house to play the same thing at the same time.

While Sonos announced its own Sonos Voice Assistant at the same event this week, it’s worth noting that the Ray doesn’t have a built-in microphone. So, you can control your audio with your voice, but only as long as you have a microphone-equipped Sonos speaker somewhere in your system.

The Sonos Ray goes on-sale June 7 for $279. It obviously doesn’t replace anything in the current lineup, but the company clearly sees this as an entry-point into its audio ecosystem. We’re looking forward to giving the Ray a full review down the road and comparing it to the $449 Beam (Gen. 2).