Do it all from your own home computer.

In 2010, The Gorillaz released an album recorded entirely on the singer’s iPad. Like them, professional and amateur musicians and producers can write, produce, and release music from anywhere and at any time, without pricey equipment like mixing boards and expensive microphones. (Even if you can afford it, a high price tag doesn’t magically transform home demos into professional-quality recordings.)

This collection of equipment will start you on your way to building a home recording studio. You’ll probably want to upgrade down the road, but you’ll have a solid base on which to build.

The Shure SM58 mic has a cardioid polar pattern, which means it’s more-sensitive at the front of the mic, less likely to pick up sounds coming from the sides, and will flat-out ignore noises that are 180 degrees opposite of the way that the mic is facing.

The mic has a frequency response of 50 to 15,000 Hz, which means it can record both the lower, boomier tones of most drums as well as the higher ones of vocals or horns. The built-in sphere-shaped filter minimizes mouth noises such as pops or breathing. Two air-filled chambers help reduce undesired noise, so the mic (hopefully) only picks up your voice. It’s also durable enough to survive the rigors of the touring.

If you place your hand in front of your mouth and say the word ‘pop,’ you to feel the air escaping your mouth. The pop filter helps stop those sudden bursts of air from hitting the mic. The six-inch filter attaches to your mic stand via an adjustable clamp and has a flexible neck for easy repositioning.

XLR cables connect your microphone into a PA system—or in the case of a recordings studio, your audio interface. The most important traits for an XLR cable are durability and how clearly it transfers the signal from the mic into the interface or speakers.

A vocal isolation shield can help block these unwanted sounds from reaching the microphone. Surrounding the mic, a padded foam interior can deaden the natural reverb of the room. By doing this, you can manipulate isolated vocal recordings using digital reverbs and other effects.

A basic, lightweight boom stand allows you to move mics easily around the studio. Unlike stands with heavy base plates, these suspend mics on an arm extending from the top of an upright pole. Use it as a vocal mic stand, or adjust the angle and height to accommodate other instruments like guitar amps or a set of drums.

When you’re recording or mixing, you might be tempted to blast your creations for the entire world to hear. Resist that urge, and get yourself a good pair of over-the-ear studio headphones to block out distractions—and to stay in your neighbors’ good graces. The Sennheiser HD 280 Pro Headphones offer a frequency response from 8Hz-25kHz, so you won’t miss a single snap, crackle, or pop. The padded ear pads rotate, making them pretty damn comfortable for marathon recording (or mixing) sessions.

The audio interface is your central hub of recording and playing back sound. The Apollo Twin has built-in preamps and works with both Windows and Mac computers. The interface allows you to plug in instruments like electric guitars, basses, or synthesizers or set up a microphone to capture the audio signals of acoustic instruments or vocals. You can listen to your recordings either through headphones or studio monitors. The Twin MKII DUO comes with recreations of old-school Universal Audio’s effects like equalizers and reverbs. There are even effects to simulate guitar amps and pedals. 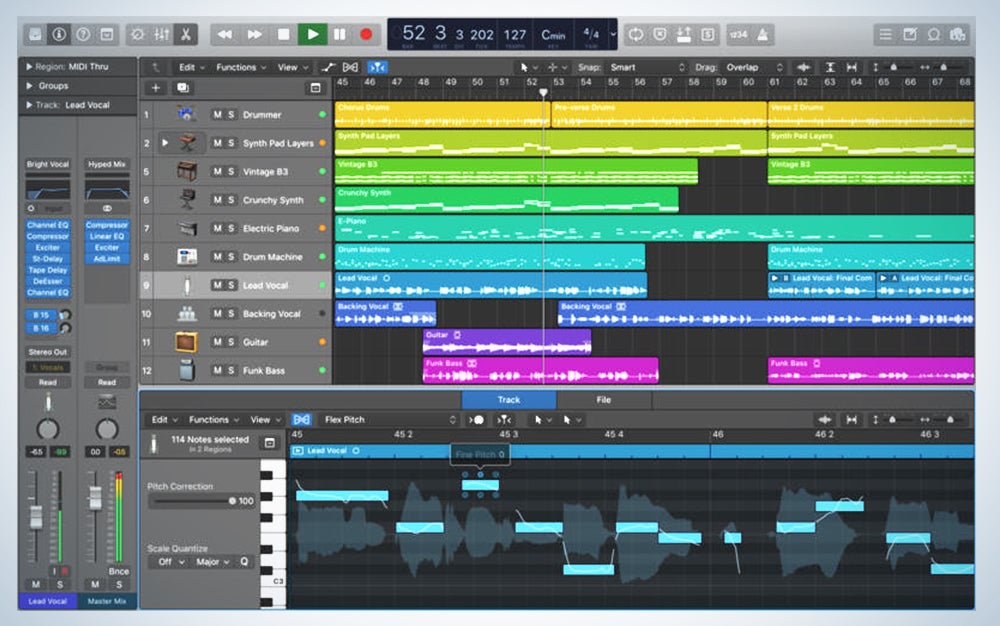 If you’ve always dreamed of having instant access to any musical instrument known to humankind, solid DAW software will be your new virtual musical playground.

DAWs contain powerful software that replicates all the best parts of a professional recording studio—from the microphones, to audio mixers, to trombones—all on your PC or laptop. Logic Pro X is the older sibling to Apple’s Garageband. It contains sophisticated tools for recording, songwriting, audio mixing, and beat-making. But unlike your favorite plain white tee, when it comes to DAWs, one size definitely does not fit all—try ’em all on for size.

The Korg nanoKEY2 is small, but reliable. The 25-key USB MIDI keyboard has buttons that bend pitches, shift octaves, and sustain notes for more control over your playing. It’s also portable, requires no separate power supply, and has improved velocity control that allows you to play notes harder and softer instead of just at one consistent volume.

Most external hard drives will do when it comes to saving your files or having backups, but the Glyph STUDIO is a favorite. It has a sturdy, metal enclosure, comes with a built-in intelligent cooling fan system, and has disk health monitoring. The hard drive comes in seven sizes—from 1 to 8 terabytes. You can also connect the drive to your computer with USB 3.0, FireWire 800, or eSATA connections.

A DAW is only as good as the producer who wields it, and the endless sonic possibilities can be overwhelming if you’re new to the world of DAWs. To remedy that anxiety (and boost your production/mixing speeds), get yourself a keyboard skin for your DAW of choice. The overlay will teach you every shortcut, so you can spend less time stressing and more time doing what you love.

Ask any musician, and they’ll tell you there is nothing worse than laying down the perfect riff, playing it back, and realizing your volume levels were completely overblown. The KRK Rokit 6 Generation 3 Powered Studio Monitors have one-inch soft-dome tweeters that provide pristine clarity and six-inch glass-aramid composite woofer that offers a clear midrange and tight bass, so you can tailor your sound and mix for venues (or bedrooms) big and small.

A power conditioner—essentially a studio surge protector—takes care of two important tasks: First, it helps protect against surges, which can damage your equipment. Second, it prevents and filters noises and electromagnetic interference that can cause pops and crackles. The Furman M-8×2 takes care of these jobs and has nine outlets for your equipment.

Not only will foam studio panels block sound from getting out, but will also absorb echoes and reverberations that would normally be bouncing off the walls, floors, and ceiling and back into your recording. Each of the 24 foam panels is a square foot.

Recording music takes time; it’s not just about getting the right take, you also have to consider mixing your music and experimenting with different effects. A comfortable chair is the only thing that keeps many of us going. It doesn’t have to be fancy, but a cushy seat with arm rests and a padded back go a long way. This AmazonBasics chair has an adjustable height to accommodate different sized desks, is on wheels for easy push-back, and can spin around in a circle when you are low on ideas and need to think.