We reported live from Sony's PlayStation 4 launch event in Manhattan. Here's what we found out about the system, games, and more. 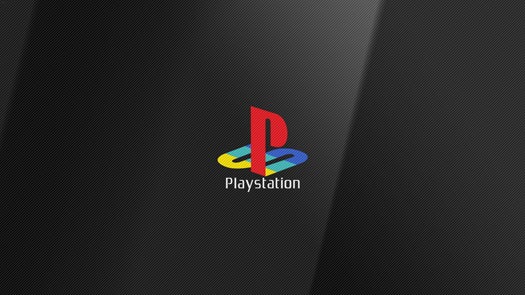 8:06: We don’t know what the console looks like, what it costs, what games costs, when it’ll ship, what kind of hardware it uses beyond “x86 processor.” What we do know is that Sony just took two hours of my Wednesday night when I could have been at home on my couch under a really nice wool blanket watching House of Cards and drinking a nice mug of tea. HOW DARE YOU SONY

8:04: Guys, pretty sure we all just got pranked, because Sony doesn’t appear to be actually showing the PlayStation 4 hardware today. That’s the end of the presentation. It’s coming this holiday season, and we still don’t know what it looks like, and I have been drinking, goodnight.

7:59: Whoa, Bungie’s on stage. Bungie is the developer behind Halo, the series that single-handedly made the Xbox a successful–perhaps the most successful–product. Looks like they’re announcing a new game called Destiny which looks…um…exactly like Halo.

7:54: We’re updating a little more slowly now because this announcement is kind of really boring? Blizzard is on stage showing off Diablo 3 on PS4, which I suppose is notable because Blizzard is typically a PC developer, but it is not that interesting. Also we have begun drinking, also we are ordering pizza.

7:45: Colin: “Wouldn’t it be weird if they invited someone without a Y chromosome out?”

7:43: This is taking forever. Some guy who does not really speak english just said “I am not the brother of your sister” in a cadence like it was a killer Steven Wright one-liner. There was complete, uncomfortable silence, obviously, because what? I feel for him. Ubisoft is on stage now. Reminder: we still don’t know what the PS4 looks like.

7:38: Square Enix is up. Editorial Director Suzanne notes that the guy giving the announcement is “PRETTY.” His game looks like some kind of terrorism simulator with bonus wizards. 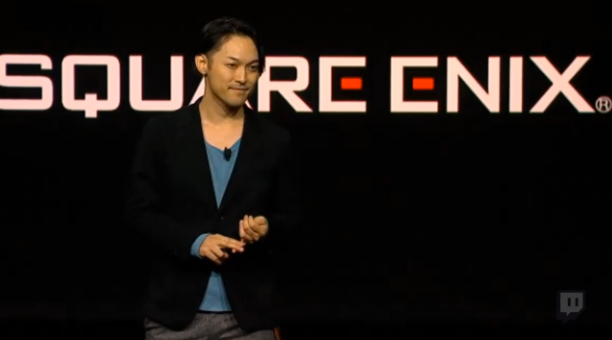 7:31: A Japanese rep from Capcom is talking about the new engine his team built from the ground up for PlayStation 4. Everyone is watching the teleprompter…because he’s speaking Japanese.

7:25: Some kind of motion-sensing music game…thing…happening here? With the Move controllers? I have no idea what’s happening to be honest. It’s like a metal riff? Please stop Sony please.

7:20: Asked Colin to tell me about the crowd. He says: “Pretty sure someone is on Facebook, but cannot confirm. Someone just left. Ha. Then someone clapped when Sony said “30,000 polgyons.” Chill out, you.

7:12: Blow’s new game, The Witness, will start on PS4 only. Colin reports that “some people haven’t looked up from their laptops or phones in several minutes.”

7:09: Hahaha Jonathan Blow, the creator of independent art games like Braid, just came out and insulted everyone who just showed off games full of explosions.

7:07: Oh, it’s a sequel to Infamous. Hm. I mean those games are fine but that was an insane intro.

7:04: Uhhhh this took a really weird turn? It’s like an insane libertarian fantasy about combating constant surveillance…and then it turned into a superhero game? What is this

6:54: This game is ridiculously violent. I’m not sure we’ve seen anything besides skyscrapers and people dying bloody deaths.

6:51: First game to be shown off is the new Killzone game, to be called Killzone: Shadowfall. It looks very violent! And pretty good, graphically, I guess? It’s not a very innovative-looking game so it’s hard to tell. Seems kind of an incremental step visually.

6:44: Interestingly, this all seems totally focused on add-ons like streaming, sharing, and emulation. We still know basically nothing about the actual PlayStation 4.

6:42: Eventually they want you to be able to stream any PlayStation game, from any system, on any device.

6:40: You’ll be able to remotely play through a level on your device from a game that somebody else owns–that’ll be through Gaikai, the streaming company Sony bought a little ways back. And there’s something called “remote play,” which’ll let you play PS4 games on the PlayStation Vita (which we reviewed here). Sony wants that for every single game.

6:30 Some dude from Gaikai is talking now. Sony is partnering with Facebook and Ustream, calling it “the first social network with streaming.”

6:27: Big social push with the PS4, sort of like Facebook. There are profile pictures and all that kinda stuff. Also you can see your friends playing from all kinds of devices…not sure if that’s something people actually want.

6:24: Love the little things being announced–you can “suspend” games in low power states. Hit the button and you’ll come back to the exact right spot. That means no more “booting” really–resume games instantly! Also, games are playable even as they download–cool!

6:21: Showing an example game that Carney, from Sony, says he “architected.” Looks like a Pixar movie.

6:18: Looks like the controller rumors were exactly right–looks pretty much like what we saw. Has a Share button, plus a stereo camera that tracks via a light bar on top.

6:15: Looks like it has an x86 CPU–that means it’s basically as powerful as a modern PC. Plus 8GB of “unified memory,” whatever that means.

6:10: And it’s officially called the PlayStation 4, which is…not a surprise! Related: what kind of accent is this? Is it maybe Australian?

6:05: Andrew House, a British man with a goatee, is listing buzzwords about games. He really likes games I think.

6:02: It’s starting! There’s a video of controller buttons, then lasers, then a bunch of weird phrases like “Imagination is the one weapon” followed by pictures of Sony’s greatest hits. Also I’m pretty sure a Metric song is playing now.

5:59: [Ed note: I just asked Colin if there was anyone around he’d like to make fun of, publicly, on a post bylined with his name. His response: “no time to list them all. Only two minutes left before it starts.”]

5:55: Current music is…Talking Heads plus some kind of smooth jazz? Like, at the same time?

5:51: Soothing voice informs me we have 10 minutes to go. Not sure if it’s a robot or a human voice.

5:50: First sighting of people taking pictures with a laptop! [Ed note: I just told Colin to leave if he feels uncomfortable in such a weird place but he’s sticking it out.]

5:48 There’s a balcony area filled with late people? Or possibly aristocrats? Also I’m pretty sure I was on Russian TV earlier so if you’re Russian, first of all, привет, second of all, please email me if I was on your TV. 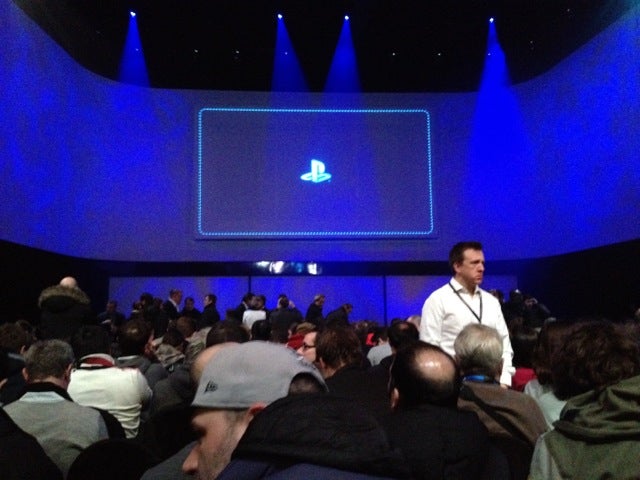 5:46: There is absolutely nothing here except a PlayStation logo everyone is waiting to change into a giant “4.” I assume. There are a few iPad games going on next to me. INTENSE BOGGLE GAME.

5:42: Packed house. There’s a circle of cameras behind me set up in back. This place is huge–there are multiple floors of people!