Roasting chestnuts on an open fire is supposed to be one of the quintessential Christmas experiences. But I’d never tasted nor smelled a roasted chestnut until I got into the genetics lab of William Powell at the College of Environmental Science and Forestry in Syracuse, New York.

For 25 years, Powell and his colleague Charles Maynard have been using genetic engineering methods to try to revive the American chestnut tree. The tree once reigned over eastern forests from Maine to Georgia, composing up to 25 percent of the canopy and providing food for wildlife and lumber for people. Then, in the early 1900s, a fungus from Asia began to kill off billions of American chestnut trees, and to this day it still plagues the trees, and keeps the species from reasserting its dominance. 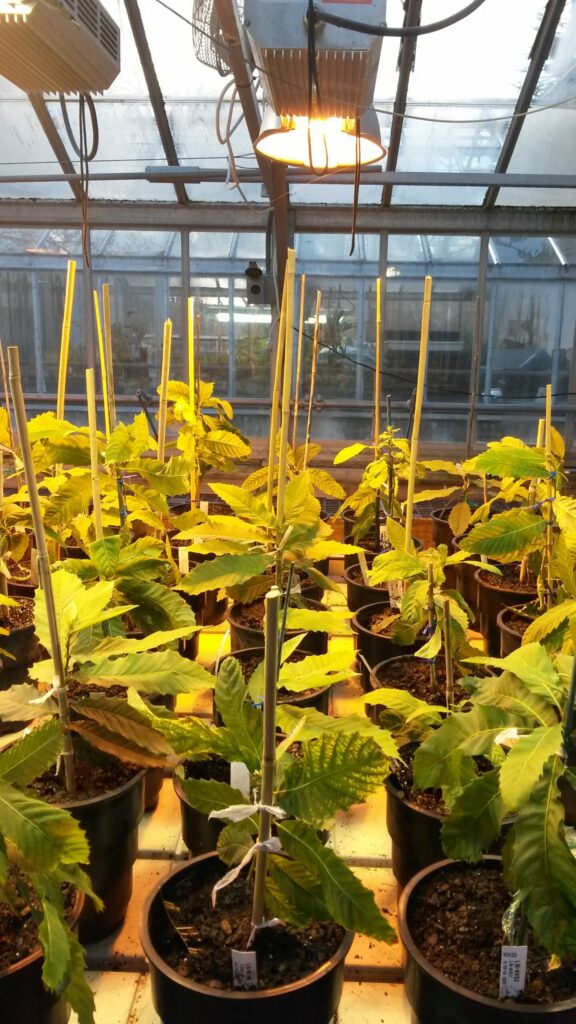 “If you don’t let out the steam they explode,” Maynard explained, slitting three chestnuts with a pocket knife before putting them in the lab microwave. I asked if I could try a transgenic one, but Powell said he’d have to get FDA approval first. The resulting treat was starchy, with the texture of a chickpea, but a little more buttery. (Powell says they taste better when actually roasted, but the lab did not have an open fire handy.)

The team has created transgenic chestnut trees that use a wheat gene to fight blight. The trees are being grown in labs and test sites, and the team may soon seek federal approval to set them loose in forests.

The project has drawn mixed reactions. On the one hand, the team aims to restore the traditional, natural ecosystem of the east coast. On the other hand, they’re trying to do that through genetic modification, a process long reviled by environmental activists, even though the science suggests the biotechnology is perfectly safe.

“No one’s ever used the tools of genetic engineering to try to help the environment, and that’s what we’re doing here.”

“No one’s ever used the tools of genetic engineering to try to help the environment, and that’s what we’re doing here,” says Powell. “A lot of people have a knee-jerk reaction: GMO means bad, without even thinking. So we’re going to have to challenge people to think about it.” 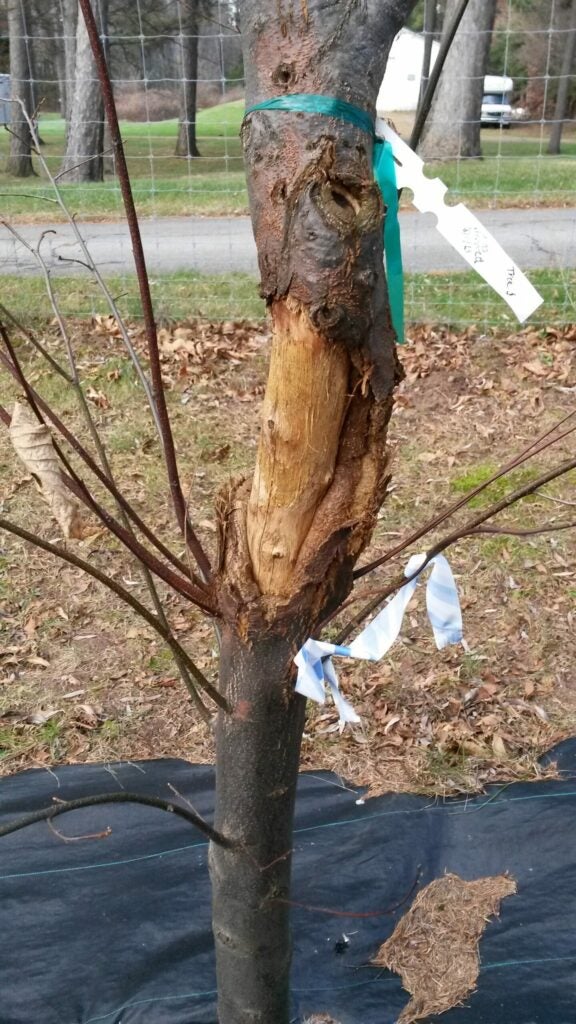 Chestnut blight has infected this tree, causing a canker that will eventually kill the tree down to its roots.

Chestnut blight is caused by a fungus that enters the tree through a wound in the bark. Once inside, the fungus releases oxalic acid to kill nearby tree tissue, getting it ready for the fungus to colonize and eat. Eventually the pathogen forms areas of dead tissue called cankers, which essentially strangle the tree, killing it down to the ground. The tree’s roots may survive for a few years, sending up new shoots every spring, but chestnut blight has kept most of America’s chestnut trees stunted.

The wheat gene in the transgenic trees codes for an enzyme that breaks down oxalic acid. Without the acid to kill the tissue, the fungus, which feeds on dead things, can’t move in. Instead it hangs out on the bark doing minimal damage. “It’s a gene that billions of people eat every day,” says Powell. “If you eat wheat, you’re eating this gene and you’re most likely eating the enzyme that it produces.”

Within the past few months, the team has shown that their transgenic American chestnut trees are as much if not more blight-resistant than the Chinese chestnut tree, a different species of chestnut which naturally fights off the fungus.

The next logical step, says Powell, will be to seek regulatory approval from the FDA, USDA, and the Environmental Protection Agency, so they can start planting the trees far and wide. The applications would involve followup studies and a lot of questioning and answering, including addressing concerns from the public. The entire process could take about five years, Powell estimates, and is complicated by the fact that the transgenic chestnuts would need to be deemed safe to eat.

Not everyone is welcoming the trees with open arms. When the Post-Standard, a Syracuse-area newspaper, published an article about the transgenic trees’ potential to revive American forests, it drew mixed feedback from readers. “The researchers’ dream could become a nightmare if something goes wrong,” Martha Crouch from the anti-GMO organization Center For Food Safety, wrote in a letter to the paper. “GE trees will be difficult to recall once they spread.”

Another commentator called the trees “unnatural,” to which Powell responded:

In early December, the activist group called “The Campaign To Stop GE Trees” called on consumers to shut the project down, saying the transgenic trees are “unnecessary, undesirable,” and “unpredictable”.

Not everyone is welcoming the transgenic trees with open arms.

There may be an alternative way to repopulate the forests with chestnuts—a way that activists, Crouch included, tend to find more palatable. While Powell and Maynard are working with the New York branch of the American Chestnut Foundation to produce their transgenic trees, the national branch of the organization is trying to create a blight-resistant American chestnut by breeding it with the naturally resistant Chinese chestnut.

The national branch has been successful in creating blight-resistant American chestnut trees that derive 1/16 of their DNA from Chinese chestnut trees. But the problem with the crossbreeding method is that the Chinese chestnut fights blight using dozens of genes that need to work together. When the trees breed, these genes get all mixed up. Many of the offspring won’t inherit the full set of blight-resistant genes, so they’re less good at resisting blight. And the resistance gets more watered down in every passing generation. In Powell and Maynard’s work, by comparison, only one gene needs to be present to confer resistance, and when the transgenic tree crosses with a wild tree, 50 percent of the offspring are highly blight-resistant.

“We’re making a smaller change than the breeding program is doing, yet they don’t have to test theirs at all,” says Powell. And sometimes that can be a problem. Researchers in Michigan once attempted to cross a European-Japanese hybrid chestnut tree to a Chinese chestnut tree, in an attempt to produce larger nuts. But the genes were incompatible and resulted in a condition known as internal kernel breakdown. A third of the offspring produced seeds that disintegrated within their shells.

“These are species that evolved on opposite sides of the globe,” says Powell. “You can breed them, but they’re not the same tree.”

Nevertheless, he says the national branch is doing good work, and someday he hopes the two programs can cross-breed their trees to make an even better tree.

Reviving Chestnuts From Ground Up

Maynard’s lab manager, Linda McGuigan, tenderly nurtures the transgenic trees from the time they are embryos. While they’re still about the size of a watch battery, the embryos get cloned and transformed, in a process that uses Agrobacterium to insert the wheat gene into the embryo’s genome. Then, for the better part of a year, the developing trees are moved from growth medium to growth medium, swaddled in bags and boxes that help to maintain precise light, temperature, and humidity conditions. Finally they’re moved into a greenhouse, from whence they might be planted on one of seven field locations around New York State. 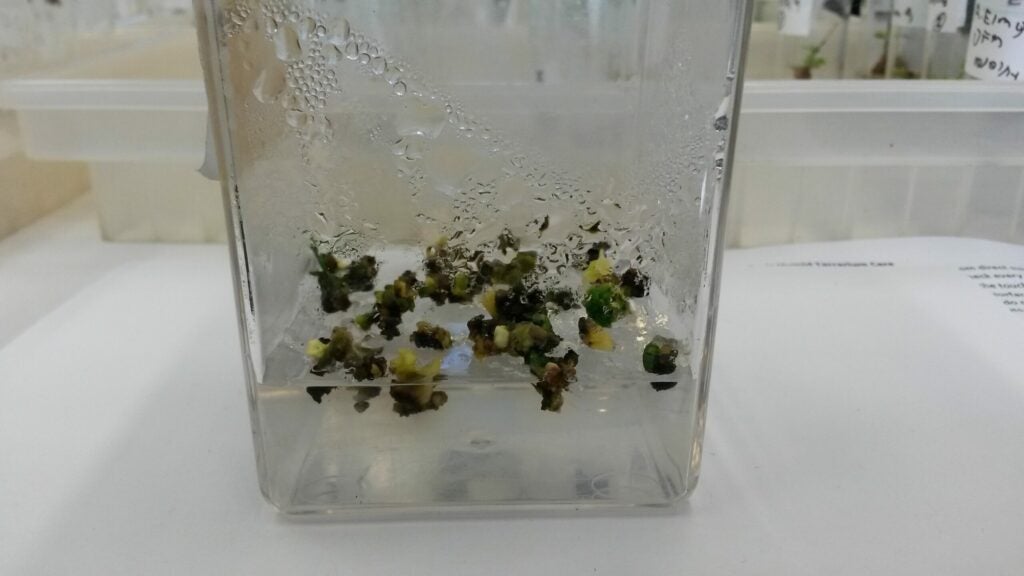 Powell, McGuigan and I walked through one such pilot site, just a few miles away from the labs. The trees look like sticks in the November ground, and their leaves crunch under our feet. The fields contain several different plots of small trees, planted at different times and different stages of the research, surrounded by fences to keep the deer out.

Looking at a plot of trees with one wild parent—the plot that proved the gene stays strong even in the second generation—Powell tells me about the lab’s intention to plant 10,000 more of the transgenic chestnut trees on pilot sites. And they’re not alone in that goal. At the time, the team was just a few hundred dollars short of meeting their crowdfunding target of $50,000 to grow the 10,000 trees. By the time the campaign closed on December 5th, they’d raised more than $100,000.

In several years, Powell hopes, the chestnut trees will be deregulated, and ready for people to plant and eat. The team says they won’t patent the transgenic trees, and that they don’t intend to gain a profit from them. They want the trees to be freely available, so that anybody can plant them at will, to eventually revive the East Coast’s historical forests.

The American chestnut tree probably won’t gain a strong foothold in the forests for at least another 100 years, Powell estimates. And the restoration will be a slow process, which will completely depend on the public’s willingness to participate. “These trees are not weeds. They do not spread quickly. So it really depends on people planting them.” 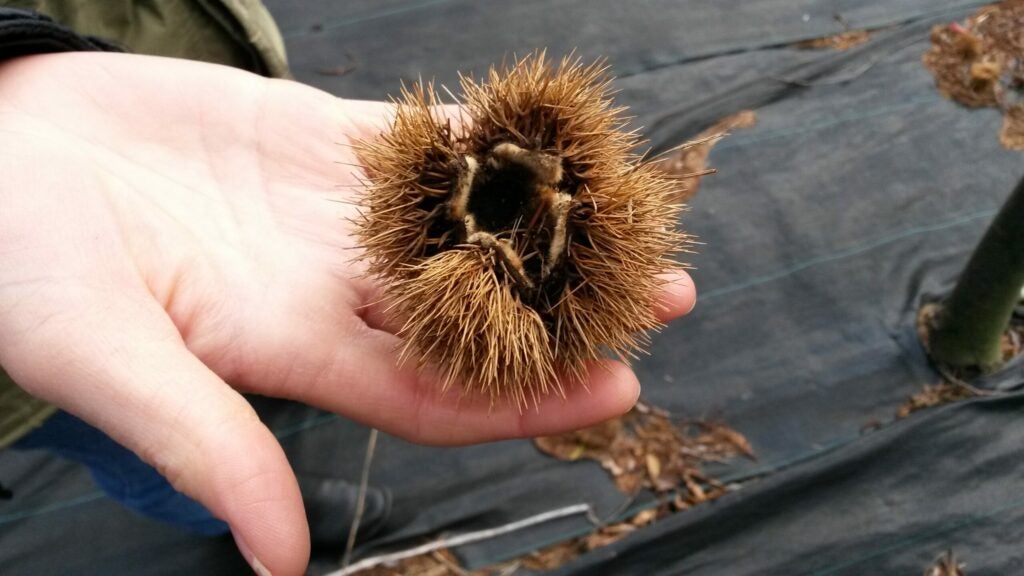