How Would The Nation Of Rationalia Defend Itself? 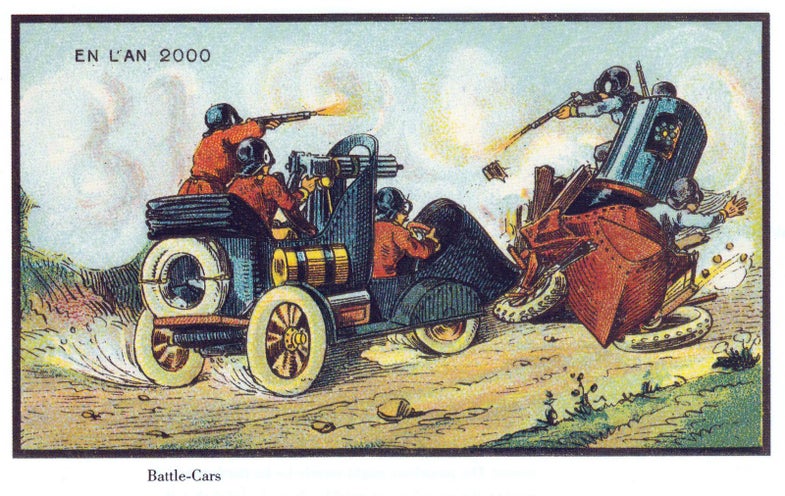 Yesterday, Defense Secretary Ash Carter revealed ten new names for the Defense Innovation Advisory Board. The organization exists to advise the Pentagon on technology, and its roster includes Alphabet head Eric Schmidt. One of the new names on the list is none other than science educator and astrophysicist Neil DeGrasse Tyson.

What follows is a work of fiction, set in a future where Rationalia is, in fact, a nation, and has to defend itself, like other nations.

The First Rationalia Science Cavalry didn’t know what to make of the soft buzzing mass on the outskirts of their forward operating base. Their sensors, so pristine in the lab, were blotted out, a kind of static appearing where once they’d illustrated plainly the features of the surrounding terrain.

Corporal Jones was the first to spy the swarm, though he had to verify it with Privates Williams and Garcia first. Peer review was essential, even in battle.

“It’s drones, sir,” Jones told Captain Lee. “Lots of them. Small. We don’t know if they’re armed, but they’re close. At the rate they move, they could be over our fences in twenty minutes.”

“And what are they doing now?”

“Resting, we think. It looks like their wings are photovoltaic, and there are only a few hours of sunlight left, but we can’t be sure how much power they have left.”

“Thank you, Jones. Keep an alert eye from the towers, and sound the alarm at the first sign of movement.”

Captain Lee was perplexed. He’d studied self-charging drones before, during his time at Carnegie Mellon. Self-sustaining crop dusters, maintenance tools for remote highways. His still unfinished graduate thesis held that such robots could be a climate-repairing tool, deployed to the Scorched Meridian. If there was going to be a way back from the Greenhouse Century, these drones could play a part.

So what were they doing so close to Lee’s battlefield?

He considered the weight of evidence before proposing a policy. The First Science Cavalry was here in the Southern Saskatchewan Desert to monitor the water supply. Rationalia was a new nation existing in an old body, and reluctantly accepted that it would need some form of military to ensure that its territory and resources remained safe from those who wished them harm.

The cavalry came about because bicycles balanced the needs of Rationalia: they could carry troops across the country relatively quickly, and they contributed the least greenhouse gases of any available transport method.

In the month since Lee’s company took its watch at Southpoint, they’d encountered mostly bandits and refugees. People without much who traveled deep into the desert, looking to scavenge the bones of the past for anything useful. Few posed a threat, and Lee was proud of how his unit coordinated with the Rationalia receiving committees to disarm and incorporate the lost future students. Sometimes, they spoke of a clattering in the sands, of a great danger growing around the Mississippi Gully. No report could be verified by an independent source, and so, without a second author willing to sign on, these observations were classified merely as hearsay and rumor, rather than imperfect recollections of danger beyond the walls.

And then the buzzing came.

After Jones’ report, the swarm stopped, and settled in the sands just on the edge of sight. It moved twice daily, positioning with the sun, and kept this up for a month.

By now, Lee’s troops treated the swarm as a natural part of the environment. The weight of evidence, growing stronger every day, was that this was a new mechanical species that found a sunny spot to rest on a great migration.

Chief Ornithologist Nguyen was in the middle of preparing a report to the National Review Board when the first drone exploded.

Jones, up in the tower on watch, was the first hit. Within minutes, Lee’s 100 troops were reduced to half that number. Those inside fared better than those wandering the grounds of the camp, but better is a relative term: inside, the troops were alive, but they could still see the carnage unfolding around them.

The explosions only stopped when night fell. The once vast swarm existed only in fragmented pieces. The bike rack, essential for Lee’s cavalry to be, well, cavalry, was a grisly sight.

With the survivors, Lee began the long trek north. The drones, it was later determined, could only work below the 48th parallel.

The subsequent investigation–the first military inquiry for the nation of Rationalia–found that he had consistently based all his policies on the weight of evidence, as dictated by the Rationalia Military Code.

The investigation also made a significant finding, one reinforced by every subsequent military expedition: there is hidden information in war. Weight of evidence alone is an insufficient guide in battle.