Scale A Glass Wall With Gecko-Inspired Adhesive On Your Hands

Special Forces can add a new item to their wish list. 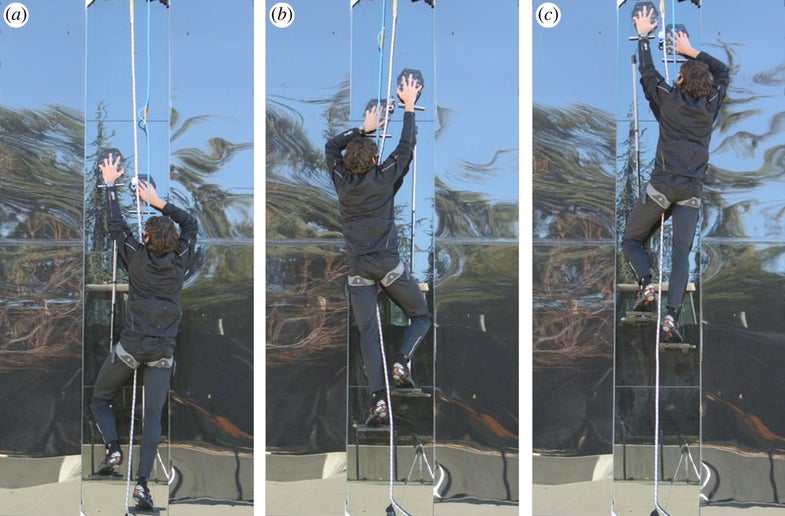 Geckos, when not shilling for insurance companies, are most known for their climbing abilities that let them scale walls effortlessly. Thanks to their biology, geckos have one major advantage over humans who want to move vertically: they are small, and their bodies are light, so their natural adhesive just has to be good, not great. But a team of scientists from Stanford University’s Department of Mechanical Engineering have now one-upped the gecko, creating a hand-sized adhesive surface that allows humans to vertically scale glass walls.

Gecko toes are covered in microscopic hairs that exploit van der Waals forces, or the weak pull between molecules, to let the lizards climb sheer surfaces. These hairs form weak atomic bonds with the surface, but because there are thousands of hairs with these bonds, the gecko has a strong grip for climbing.

The Stanford researchers created hand-grippable pads, which are stronger than gecko toes, as their synthetic adhesive retains its strength over a larger surface area. Larger creatures have more mass, and so a human climbing a glass wall needs a stronger grip than a gecko doing the same movements to overcome that.

The Stanford project here uses octagonal hand grips, linked to a foot support below. This allowed a 154 pound human to climb several feet up a sheer glass wall in 90 seconds. If climbing walls sounds like something the military is interested in, that’s because it is. DARPA has climbing projects for both robots and humans. Because that research is of a military nature, it also means that all the details aren’t public like they would be in a published research paper.

There are still limitations to the design. Gecko toes, while capable of climbing glass, are designed for uneven and less smooth environments than skyscrapers. Humans with this new system, while they could scale skyscrapers easily, would have a much harder time using it on cliffs or in rain forests.