Growing right between the mayo and cheese 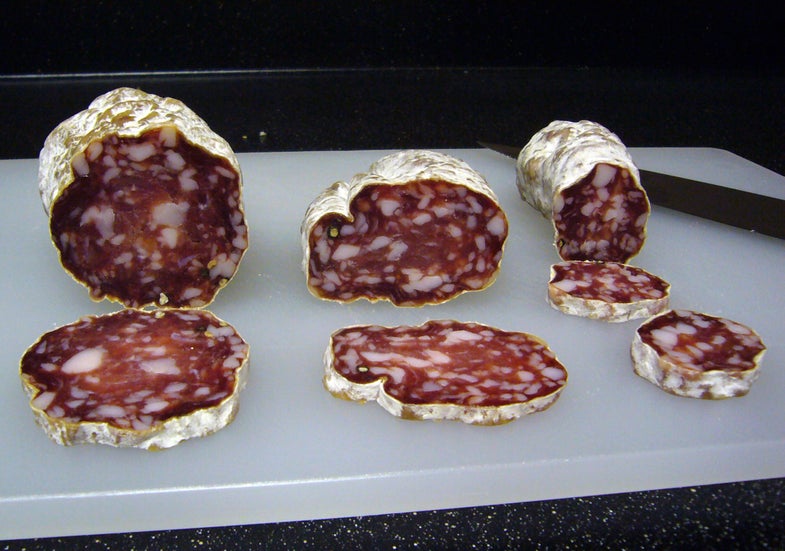 To find a new species of mold, look no further than inside your sandwich. A team of food scientists from across Europe have discovered a new kind of fungus growing on salami, which they’ve aptly named Penicillium salamii.

The researchers made the find after setting out to catalogue all of the fungi located on cured meats at a meat packing plant in Italy. The survey was part of a government initiative to increase food safety, the study says. Generally, salami uses Penicillium nalgiovense–a white, edible mold–in the meat curing process. When the salami is cased, spiced, and ready to go, meat producers introduce the mold to seal in flavors and keep other potentially dangerous molds out.

Using DNA sequencing, the team identified two fungi living on the cured meats they analyzed: Penicillium nalgiovense, the typical mold, and another mold that seemed to be related to Penicillium olsonii. But it wasn’t exactly the same.

Olsonii can grow on cured meats naturally, but when the researchers looked at the fungi found on the Italian meats at a molecular level, they noticed differences between what they were seeing and olsonii. For instance, the fungi produce slightly different metabolites, and unlike the white nalgiovense and the gray olsonii, the new mold boasts a more greenish color. Scientists don’t know how old this new mold is, but they think it has been around for a while, getting mistaken for its cousin. “There are several reports in literature on the presence of P. olsonii on fermented meats. Because of the strong resemblance of P. salamii with P. olsonii it is likely that some of the strains identified as P. olsonii are actually P. salamii,” the researchers wrote. This means the fungus is likely everywhere from Argentina, to Greece, to Spain.

The good news? It’s not bad for you, the study claim (Though more studies will have to be conducted before salamii can be on the official list of fungi that are beneficial to use with food). But don’t go inspecting the hard salami you just picked up from the store; usually it’s the more expensive kinds that use the mold for flavor preservation. The Food and Drug Administration says the white mold (which we now know has little green bits to it too) on San Francisco, Italian, and Eastern European types of salami is fine to eat as long as they don’t have any other kinds of mold showing.

Now that they’ve identified the mold, the scientists want to see if it can be beneficial for larger mass production of cured meats. They published their findings January 16 in the International Journal of Food Microbiology.