From the Popular Science archive, the story of how Watson, Crick, Wilkins, and Franklin worked out the structure of life. 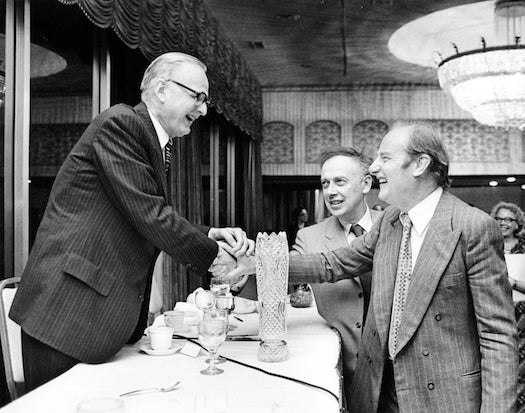 “DNA: It Calls the Signals of Life,” by Wallace Cloud and excerpted below, originally appeared in the May 1963 issue of Popular Science_ magazine. Francis Crick and James Watson first described the double helix structure of DNA on April 25, 1953.–Ed_

Last December an American biologist and two English physicists received formal recognition, in the shape of a Nobel Prize, for a discovery made 10 years ago—a discovery that started a chain reaction in biology.

They determined the structure of a molecule that provides answers to questions scientists have been asking for over a century:

The stuff that genes are made of

Sounds like a lot to expect of a molecule—even one with a jaw-breaking name like deoxyribonucleic acid (known more familiarly as DNA). But it’s scientific fact that DNA is what genes are made of. DNA molecules supply the basic instructions that direct the life processes of all living things (except a few viruses). The DNA molecule contains information in a chemical code—the code of life.

The effects of discovery of the structure of DNA have been called “a revolution far greater in its potential significance than the atomic or hydrogen bomb.” Professor Arne Tiselius, President of the Nobel Foundation, has said that it “will lead to methods of tampering with life, of creating new diseases, of controlling minds, of influencing heredity—even, perhaps, in certain desired directions.”

I asked the American member of the Nobel Prize trio, Dr. James D. Watson, about these speculations in his laboratory at Harvard. It was a few weeks before he flew to Stockholm to receive the award along with Dr. Francis H. C. Crick of Cambridge University and Dr. Maurice H. F. Wilkins of King’s College, London.
The discovery of the structure of DNA was as important as the working out of atomic structure that led to the atom bomb.

The boyish 34-year-old Nobelman, who did the prize-winning research in England when he was only 25 (he entered college at 15, had been a Quiz Kid before that, in the days of radio), refused to endorse the wilder predictions about the future of DNA research. He said, “The average scientist busy with research looks ahead anywhere from an hour to two years, not more.”

Conceding that discovery of the structure of DNA was as important as the working out of atomic structure that led to the atom bomb, he added, “It will have a very profound effect, slowly, on medicine. Doctors will stop doing silly things. Our knowledge of DNA won’t cure disease, but it gives you a new approach—tells you how to look at a disease.”

Dr. Watson went on to explain just what he and his co-workers discovered during those days of inspired brainwork in England, back in 1953, and how they did it.

The discovery was not the work of an institute-full of technicians, he said, but the product of four minds: He and Crick did the theoretical work, interpreting cryptic X-ray diffraction photos made by Wilkins, who had as collaborator an English woman scientist, Dr. Rosalind Franklin. She died in 1958. She “should have shared” the Nobel Prize, said Dr. Watson.

Picking up the thread

DNA was not a newly discovered substance. It had been isolated in 1869, and by 1944 geneticists were sure it was the substance of the genes—the sites of hereditary information in the chromosomes. Then they started asking, “How does it work?” That’s the question Watson and his co-Nobelists answered.
They knew DNA as one of the most complex of the “giant molecules” known to man.

They knew DNA as one of the most complex of the “giant molecules” known to man. It was believed to have a long, chainlike structure consisting of repeating groups of atoms, with side groups sticking out at regular intervals.

The shape of the DNA molecule was important. In the cell, many of the larger molecules work together like machine parts, and their mechanical properties are as important as their chemical activity. However, even the electron microscope, through which it is possible to see some of the biggest giant molecules, shows DNA only as a thread, without detail. One way of “looking” at molecules is to take them apart by chemical treatments that make small molecules out of big ones. In the case of DNA, the pieces—six kinds of sub-molecular units—had been identified. Now it was necessary to figure out how the jigsaw puzzle fitted together.

Read the rest of the story in the May 1963 issue of Popular Science.