Happy Birthday To The “Dark Lady Of DNA”

Rosalind Franklin would have been 96 today. 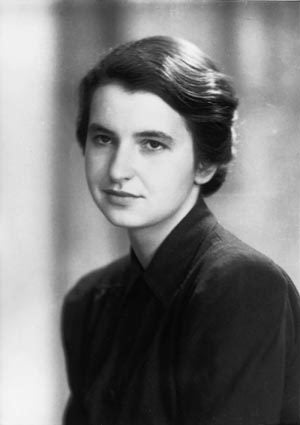 Rosalind Franklin was a chemist credited for helping discover the structure of DNA strands.
SHARE

Twist up some DNA-shaped balloons: Rosalind Franklin was born on this day 96 years ago.

Called the “dark lady of DNA,” Franklin did work in X-ray crystallography that contributed to one of the biggest discoveries of the last century: the double helix molecular structure of DNA strands. Despite her contributions to this discovery and her research on carbons and viruses, much of her life’s work was pushed aside until after her death at age 37.

Popular Science’s May 1963 issue featured an interview with Franklin’s scientific peers — James D. Watson, Francis H. C. Crick, and Maurice H. F. Wilkins — on their Nobel Prize winning breakthrough. She “should have shared” the Prize, Watson said, as an integral part of the process.

According to a bio of Franklin by the NIH, Wilkins, who was Franklin’s assistant lab chief while at King’s College, showed Crick and Watson her DNA work without her permission. With this new knowledge, they built their paper and published in Nature without credit to Franklin. Crick later admitted that she was “two steps away” from the discovery herself.

Franklin’s outlook on work and life can be summarized in this excerpt Franklin wrote in a letter to her father in 1940: