What happens in the mysterious layer between the ocean's surface and the air? A massive experimental machine in San Diego aims to help us understand. 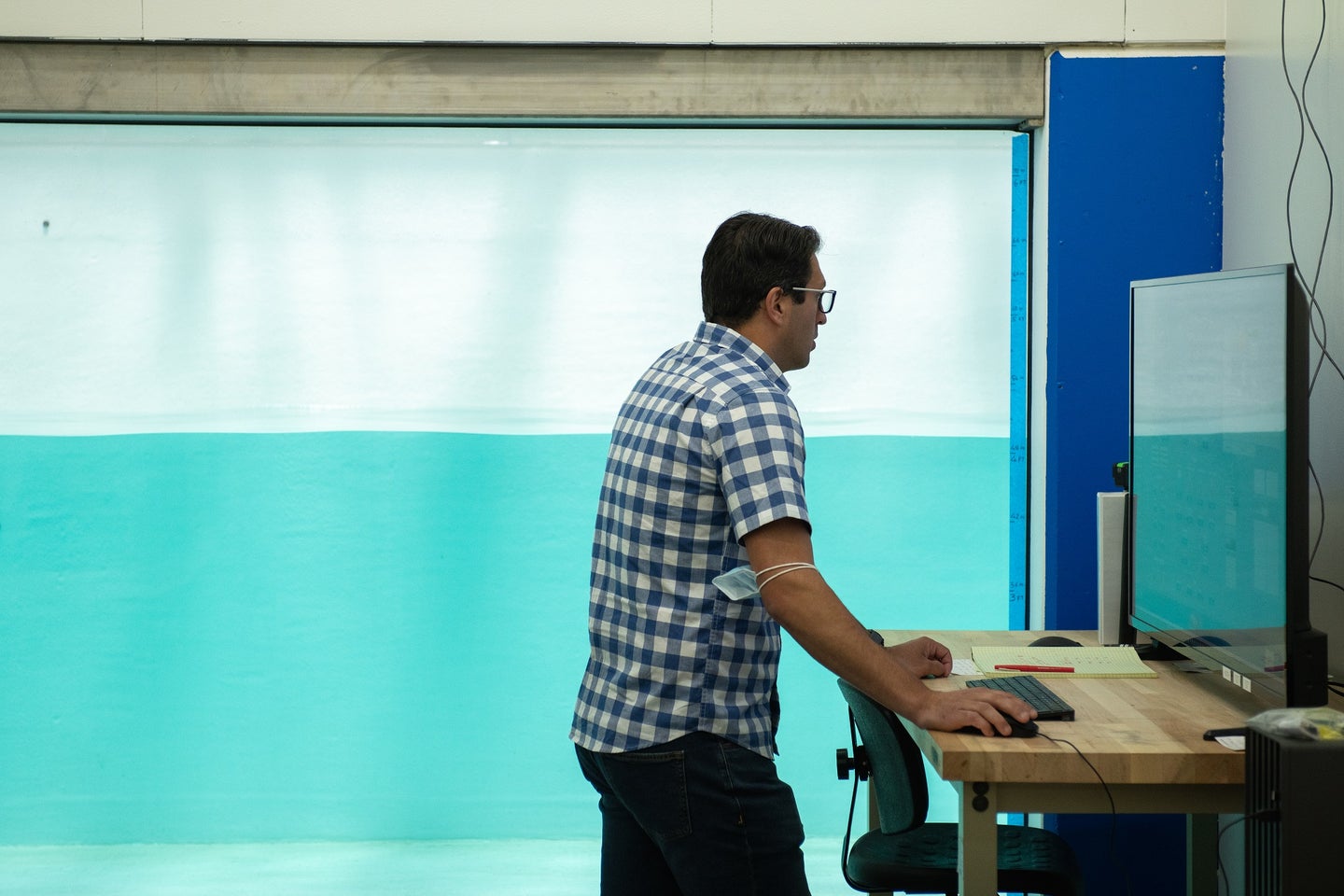 Stationed inside a cavernous wooden building in San Diego, California, mere strides from the Pacific surf, the world’s first ocean-atmosphere simulator rumbled to life. With the flick of a switch and a rush of sounds, meter-high waves began to flow through a 120-foot-long tank rigged up to an array of sensors, lights, and computers.

The Scripps Ocean Atmosphere Research Simulator, or SOARS, mimics the interaction of water, weather, salinity, chemistry and microbial marine life at the sea surface in a laboratory setting. Designed by the Scripps Institute of Oceanography at the University of California San Diego, this miniature biome can generate sizable waves, create hurricane-force winds, control air and water temperature to replicate polar and tropical conditions, and churn up phytoplankton blooms with a wide array of species. Additionally, SOARS allows researchers to test variables like greenhouse gasses and other air pollutants for studies on future climate scenarios.

With the potential to match and reproduce the physics, biology, and chemistry across the seven seas, as well as across time itself, the simulator aims to serve as a catalyst for interdisciplinary, ocean-related exploration, the team behind it says. More specifically, it has the potential to deepen our understanding of the interactions between the sea and atmosphere—a layer that plays an outsized role in the planet’s functions.

The SIO Hydraulics Laboratory, which houses SOARS, was built in 1964 for precisely this kind of large experimental apparatus. Throughout the decades, it has stored a variety of wave channels and basins, flow tanks, and a more simplistic wind channel. As equipment ages and is decommissioned, the university cedes the space to more advanced instruments, such as the new simulator.

“SOARS is totally unique and a first of its kind,” says Dale Stokes, Scripps oceanographer and co-principal investigator of SOARS. “There are other wave channels or wind tunnels around, but nothing with the full environmental control and complexity that SOARS has … as well as its capability to replicate the sea surface anywhere on the planet.”

The machine, which took five years to complete, was primarily funded by a $2.8-million grant from The National Science Foundation and constructed by the wind tunnel manufacturing company Aerolab. Paul Vasilescu, vice president at Aerolab and principal engineer for SOARS, has seldom been so impressed by one of his inventions.

“We started with a clean slate entirely developing this from scratch as far as the overall design,” says Vasilescu. “It’s definitely exciting to be able to come up with this machine and to really enable the type of research that [Scripps is] going to be able to use it for.”

The 36,000-gallon saltwater tank is filled straight from San Diego’s La Jolla Cove. It features a large paddle that generates waves on command, and is illuminated by both adjustable skylights and vivid bulbs that simulate natural light hitting the ocean’s surface.

When it comes to marine ecosystems, what happens on the surface of the water is just as important as what happens below it. Studying the air-sea boundary, where the atmosphere and ocean intersect, was the main motive in crafting the simulator. As one of the most chemically and physically dynamic environments in the world, the air-sea boundary is essential to life in the oceans—and everywhere else.

“It is a special place, an intricate dance between water and air,” says Grant Deane, Scripps oceanographer and co-principal investigator of SOARS. “Because the air-sea boundary covers 71 percent of Earth, what happens there is tied up into the fate of the planet. Roughly 90 percent of the heat trapped by excess greenhouse gasses and one-third of all carbon dioxide that is released across the planet goes through the boundary into the ocean. It has a very, very important impact on weather and climate. ”

As water and other particles evaporate from the air-sea boundary, they condense to control the formation of clouds or vapor. This water then cycles back to the ground through precipitation, sustaining plants, microbes, animals, and humans.

Previously, marine biologists and other scientists would conduct their research on the air-sea boundary on ships and complex computers. But studying subtle chemical and physical dynamics on the water’s surface at the mercy of Mother Nature can be very difficult—not to mention expensive. While the SOARS team says the simulator is not meant to be a replacement for oceangoing exploration, it can act as a bridge between the lab and the wild elements.

Timothy Bertram, an atmospheric chemist at the University of Wisconsin, is one of many scientists who are eager to both see SOARS in action and contribute to its upcoming investigation of the sea-air boundary.

“Environmental boundaries are some of the most fascinating areas for research, as mass and energy is exchanged between compartments of the Earth system,” says Bertram. “However, studying processes at these interfaces is notoriously hard to do in a systematic and controlled way. SOARS will generate interest in a wide number of fields and permit cross-disciplinary studies that are often hard to orchestrate.”

One of the biggest opportunities the simulator offers is a deep dive on what’s happening at the poles. In Arctic regions, the air-sea boundary includes ice sheets, which rely on both oceanic and atmospheric stability. With SOARS’s more frigid settings, researchers will be able to study the interactions between melting ice and sea level rise, as well as the transfer of microorganisms from the water to the air. Groups interested in studying the Antarctic Ocean can also switch the machine into polar mode, dropping the saltwater temperature to 34 degrees Fahrenheit and wind temperature to -2 degrees Fahrenheit.

“We can turn the knobs and use it like a time machine,” says Stokes. “We can make it simulate conditions that we had in the recent past or we can, say, dial up the CO2 levels and look at what will happen to these microorganisms in the future.”

By providing access to the simulator to chemists, biologists, oceanographers, and more, Scripps is hoping that SOARS will serve not only as an innovative research facility, but as an inspirational melting pot for the future of science.

Within the next few weeks, Deane, Stokes and Vasilescu will work with outside researchers and labs to configure the machine for a diverse range of experiments. The simulator is already slated to get a wind-power upgrade to better mimic hurricanes and tropical storms. This could lead to improving building codes for structures in the real world to help them withstand extreme weather events that are becoming more prevalent over time.

“While there is no other thing like SOARS on the planet, we are really hoping that other countries will want to build one of their own,” says Deane. “The ocean is a very complex system, and it doesn’t care whether we divide ourselves into these different parts or fields. We can do a lot of work with [our simulator], but we can do even more if this effort is reproduced and collaborative.”