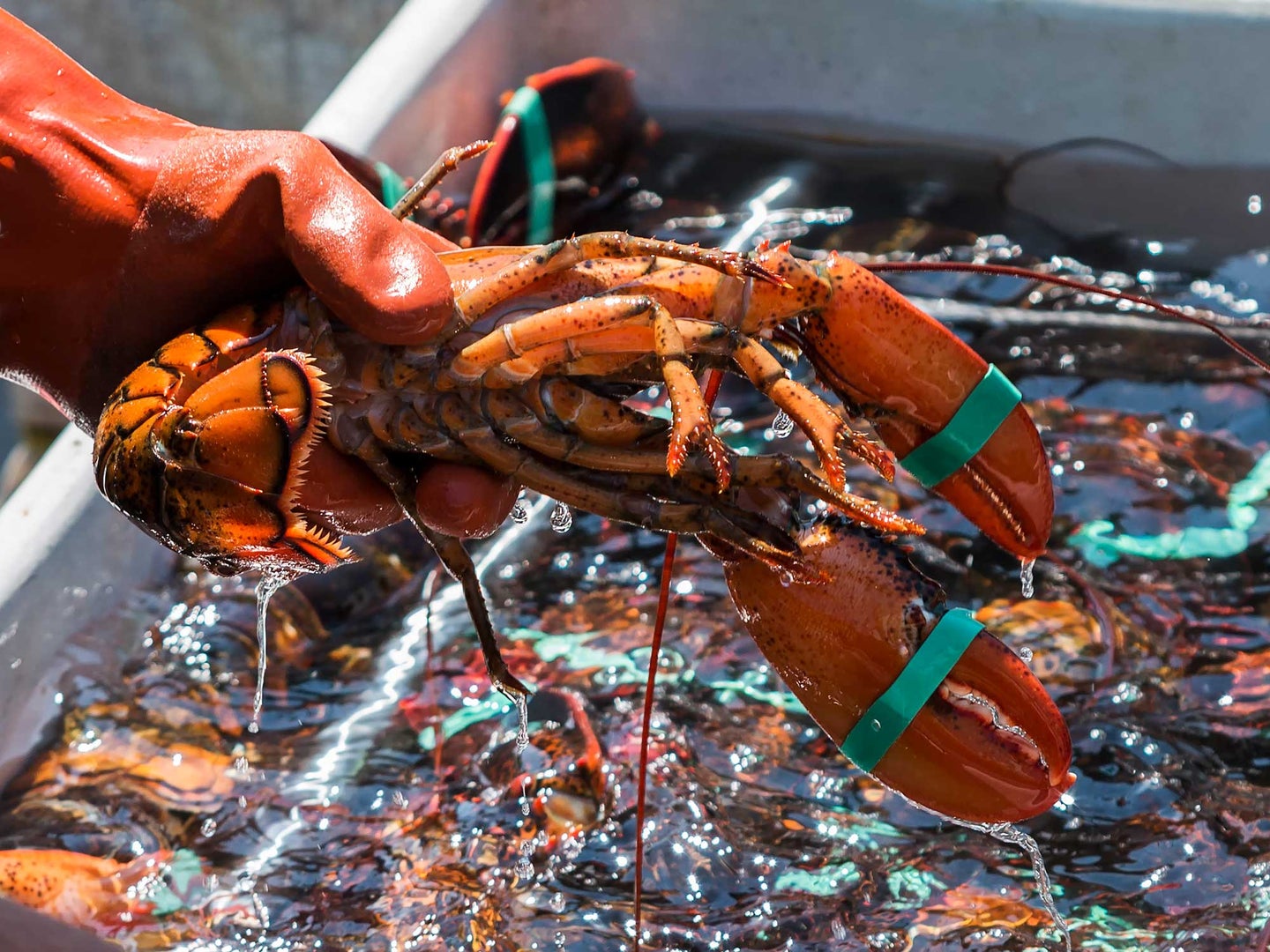 In Maine, the red designation has taken locals from lobstermen to politicians by surprise, and they’re pushing back. . Deposit Photos
SHARE

This article was originally featured on Saveur.

Earlier this month, the Monterey Bay Aquarium’s Seafood Watch program downgraded American lobster to its red list. According to the organization, which rates seafood based on criteria of sustainability and environmental impact, consumers should avoid red-listed seafood because its harvesting poses a threat to wildlife or the environment. In the case of American lobster, also known as Maine lobster, the at-risk wildlife is the North Atlantic right whale, among the world’s most endangered whale species (fewer than 350 remain). In Maine, the red designation—the latest in a series of setbacks to the industry—has taken locals from lobstermen to politicians by surprise, and they’re pushing back.

The hazard that the lobster industry poses to right whales mostly stems from the design of the fixed-gear fishing equipment, which involves a buoy that connects to underwater traps or pots by vertical rope. Whales can get tangled in this rope, which, along with vessel strikes, is a leading cause of death for the animals. As bad luck would have it for the marine mammals, their habitat range overlaps with large commercial fisheries that use this type of fishing gear, including the Gulf of Maine lobster fishery (referring collectively to the thousands of commercial owner-operators catching lobster off the state’s coast).

According to Curt Brown, a commercial lobsterman and wholesale lobster company Ready Seafood’s marine biologist, the Maine fishery has overhauled many aspects of its harvesting practices to minimize risk to right whales. Improvements, some of which came as federal requirements, include installing weak links in the gear that would allow a tangled whale to break free, reducing the amount of rope in the water (which has eliminated more than 30,000 miles of line throughout the Gulf), and adding markers to their gear to help trace the location of any entanglement. “We believe strongly that we’ve done everything that we need to do and we’re still doing more. We’re doing our part,” says Mark Murrell, founder of seafood distributor Get Maine Lobster. By Brown’s estimate, these safety updates have collectively cost Maine lobstermen tens of millions of dollars—and he says their efforts have paid off.

Maine’s lobstermen believe these setbacks to their livelihood place undue blame on them. “We continue to get pushed for something that we are not the cause of,” says Brown. “There have been zero documented mortalities of a right whale in Maine lobster gear ever, and there have been zero documented entanglements of a right whale in Maine lobster gear since 2004.” According to a 2021 data analysis published in the journal Oceanography, right whales are foraging less in the Gulf of Maine and increasingly shifting to the Gulf of St. Lawrence in eastern Canada. “Climate change and warming sea surface temperatures may be forcing right whales to spend more time farther north than they used to,” explains Jack Cheney, a researcher with the University of Washington’s School of Aquatic and Fishery Sciences and a sustainable seafood consultant. Maine fishermen, many of whom may not have even seen a right whale in years, “don’t understand why they’re getting penalized,” he says. “There’s no smoking gun.”

Still, that doesn’t mean the marine mammals are absent from Maine lobster management zones. Many North Atlantic right whale deaths can’t be attributed to any human activity in particular. According to a recent Seafood Watch press release, the majority of entanglements happen unseen and thus can’t be linked back to a specific location or type of gear. As a preventive measure, the program designated numerous fisheries using fixed-gear equipment in the habitat range of the whales as unsustainable. Multiple commercially caught species in addition to lobster were impacted, including black sea bass caught by pots in New England. Even though that fishery doesn’t operate during the times of year when right whales are typically in the area, Seafood Watch still downgraded the fishery’s fixed-gear harvesting method to red, Cheney explained. “They’re taking an extremely precautionary approach.”

But this approach “makes it appear that all of these fisheries are on equal footing,” Brown argues, pointing out that the Maine fishery has taken more steps toward sustainable fishing than many others along the eastern seaboard. Since the advisory team released its draft assessment in 2019, representatives from Maine, including Brown, have met with Seafood Watch assessors multiple times to present evidence of the specific measures the lobster industry has taken. “I think all the information we presented fell on deaf ears,” says Brown.

Cheney, too, was surprised that the entire Gulf of Maine received a blanket rating. “I don’t know why they couldn’t potentially rate specific areas along the Maine coast with different ratings,” he says, pointing out that Norway received 13 distinct ratings for farmed Atlantic salmon.

Though Seafood Watch has issued controversial ratings before, red-listing the Maine fishery has impacted an iconic industry that not only is deeply associated with New England culture but also has a strong generational component and vocal stakeholders. (The Maine Lobster Marketing Collaborative has launched a petition urging Seafood Watch to reconsider its rating.) “They [Seafood Watch] just kind of dropped it on people,” says Cheney, pointing out that the industry wasn’t given time to adjust its practices before the red designation was issued.

It’s uncertain if advance warning would have ultimately made a difference in the rating. One risk-reduction solution, which NOAA officially proposed in July, will likely take years to implement: a transition to “ropeless” fishing gear. This equipment, which the Center for Biological Diversity is urging the federal government to require for trap fisheries by 2026, involves various methods of deploying and retrieving traps without the need for vertical lines or other ropes in the water.

Because ropeless fishing gear would no longer be visible from the ocean surface, the entire industry would have to integrate into a new GPS-based system. “Ropeless gear would [almost] solve it all,” says Cheney, but he recognizes how drastic of a technological jump the conversion would entail. “It’s like having bicycles and being like, ‘Okay, everyone’s going to switch to Teslas.’” The shift would also alter the very framework of the industry. “People use their extra traps to mark their territory so people don’t fish there,” explains Cheney. “If you get rid of that system and have just ropeless gear, it’s going to kind of throw the whole culture into disarray.” Not to mention, all the new technology would be a heavy financial burden for the lobstermen to shoulder—and make it cost-prohibitive for many young would-be entrants to join the industry. “There’s not enough federal support for the industry to make a major shift like they’re calling for,” says Ethan Morgan, the general manager of seafood restaurant Portland Lobster Company.

One positive change Cheney hopes will result from Seafood Watch’s red rating is to generate investment around projects aimed at further improving the sustainability of Maine’s lobster-catching industry. “I do think ropeless gear can happen eventually,” Cheney says, but notes that more funding and research and development are necessary before state-wide adoption will be within reach. “You can’t just change an industry overnight,” adds Murrell, and in the meantime, “people have families to feed.”

What long-term economic impacts Seafood Watch’s designation could have on Maine’s lobster industry is still unclear. “Red listing plants the seed in people’s minds that Maine lobster is not sustainable,” says Brown. Some retailers and restaurants, including Whole Foods and Red Lobster, consider the ratings in their sourcing policies. Murrell, however, mentions that since Maine lobster was red-listed, he’s only received one email from a customer asking about the designation. But no direct sales impact so far doesn’t mean the industry won’t feel the pinch going forward. “It may carry over into where people decide they’re going to be vacationing next year,” says Morgan, pointing out that lobster season draws significant tourism to Maine.

Cheney emphasizes that there are valid arguments on both sides of the debate over whether the Maine fishery’s red rating is warranted. “It’s just such a complicated situation. I don’t think there’s any hard, fast, right answer,” he says. “Expecting people to know the solution is unfair and unrealistic. It’s so complicated—and unprecedented.”

“You have thousands of people out there on boats,” adds Morgan, “trying to do the right thing.”