Extreme summer weather will be back next year . . . and probably forever

Some research suggest these outliers are shifting to norms. 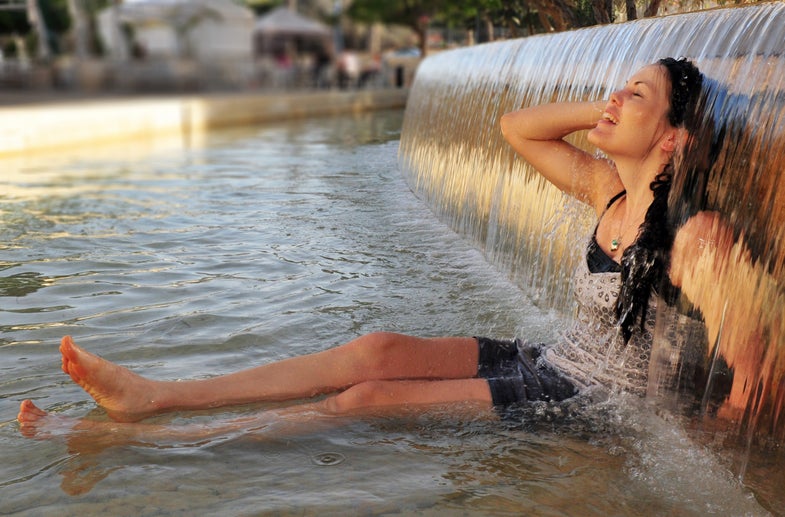 It’s not just in your head: we really are experiencing more dangerous and extreme weather events than ever before in modern times. This summer alone, we’ve coped with record-breaking heat waves, wildfires that have ravaged swaths of land out west, and one of the most powerful and unusual hurricane seasons to date. And we might have to get used to these things as routine parts of our lives.

According to new findings published Wednesday in Science Advances, extreme weather during summer months in the northern hemisphere could rise in prevalence by an average of 50 percent by 2100. And that’s just the conservative estimate—the research team behind those findings suggests the persistence of destructive weather could more than triple by the end of the century.

“Extreme summers like we saw in 2018 are a consequence of the effect that climate change is having on the jet stream,” says Michael Mann, a climate scientist from Pennsylvania State University and the lead author of the new study. Global warming is making our jet stream go haywire, which in turn zonks up the natural cycles that govern how severe the weather can become, and how often. “Our study shows that this is likely to get substantially worse in the future if we do not reduce carbon emissions. There is still time to reduce emissions fast enough to prevent any significant worsening of this problem.”

The jet stream encompasses the high-altitude winds running over the oceans, affected by the temperature differentials created between the cold Arctic and hot tropics. Warming Arctic temperatures effectively narrow that differential and cause the jet stream to slow down.

At the same time, extreme weather is associated with deep surface high pressure caused by higher temperature, drought, and wildfires (among other sources); as well as by low pressures caused by heavy rainfall and floods. These systems “are located under the peaks and troughs, respectively, of the meandering jet stream,” says Mann. “The bigger the peaks and troughs, the deeper those high and low-pressure systems—and the more extreme the weather.”

The jet stream carries these systems with it as it plunges south, but when the jet stream slows down and stalls during the summer, extreme weather events can linger over certain regions for several days or even weeks at a time, creating persistent, dangerous conditions that are not easy to adapt to. The authors call this phenomenon quasi-resonant application (QRA).

Climate research is vast, but there has been a hole in accurately assessing how warming temperatures have messed with jet stream behavior, and in turn how these effects propagate into prolonged bad weather. Mann and his team sought to fill that gap and conceive of a more rigorous way to model this relationship and connect the dots between climate change and the rise in harsh summer weather.

In the latest study, Mann and his colleagues created new climate projections that suggest it’s very likely extreme weather induced by jet stream stalling in the northern hemisphere will increase by 50 percent before 2100, although the absolute ranges of the models predict there could be anything between a slight decrease to an increase by more than 200 percent. The drastic range is thanks in part to a lack of long-term data and models that can robustly account for the complex variables that affect climate.

“Our study,” says Mann, “demonstrates that this effect is not captured well in current generation climate models, which are therefore under-attributing the role that climate change is having on extreme summer weather events.” The study only predicts what things would look like for summer seasons in the northern hemisphere, but the team is currently moving forward with investigating jet stream stalling on the southern hemisphere as well.

The most obvious way to mitigate these effects is to limit climate change, and reducing greenhouse gases would be the most logical start. Mann also thinks a reduction in coal burning, which would prevent sulfur dioxide from being released into the air and forming aerosols, could also significantly help in remediating the jet stream. Overall, the team recommends efforts that would dramatically reduce fossil fuel burning and limit warming to less than 2 degrees Celsius relative to pre-industrial levels.

None of these findings, however, should be taken at face value. Besides the uncertainty raised by the authors themselves, “the trend in the jet stream anomalies in a warming climate is a hotly debated topic—much more contentious than the global warming itself—and new studies are being added constantly,” says Noboru Nakamura, a professor of atmospheric dynamics at the University of Chicago. The main problem, which he says is not necessarily specific to this study, is that there are many things that factor into the interactions of atmospheric forces, and trying to draw a direct line between these conditions and anomalies in the jet stream can be quite difficult. It’s much harder than assessing the relationship between carbon dioxide emissions and surface temperatures. So scientists have to settle for proxy measurements that act as fingerprints, which are not always the strongest form of evidence. (In this case, the fingerprints for QRA occurrence are in surface temperatures.)

In addition, Nakamura points out that the mechanism of the jet stream-extreme weather connection in this new study, QRA, is not without controversy. “The theory is plausible,” he says, “but it is difficult, in my opinion, to unambiguously demonstrate with data.

“While this particular paper alludes to a substantial future increase in extreme summer events associated with the jet stream behaviors, and while the authors may well be right, I feel that much more work is needed to draw a definitive conclusion,” says Nakamura. He likens the new findings to a piece of a working puzzle, rather than a solution itself.

While scientists might have different ways of interpreting this latest data, there’s an unambiguous consensus that things are only going to get worse if we don’t take meaningful action to fight climate change. And the good news is, there’s still time.