It’s about time adults start rising up against climate change

Everyone, from children to grandparents, should take action. 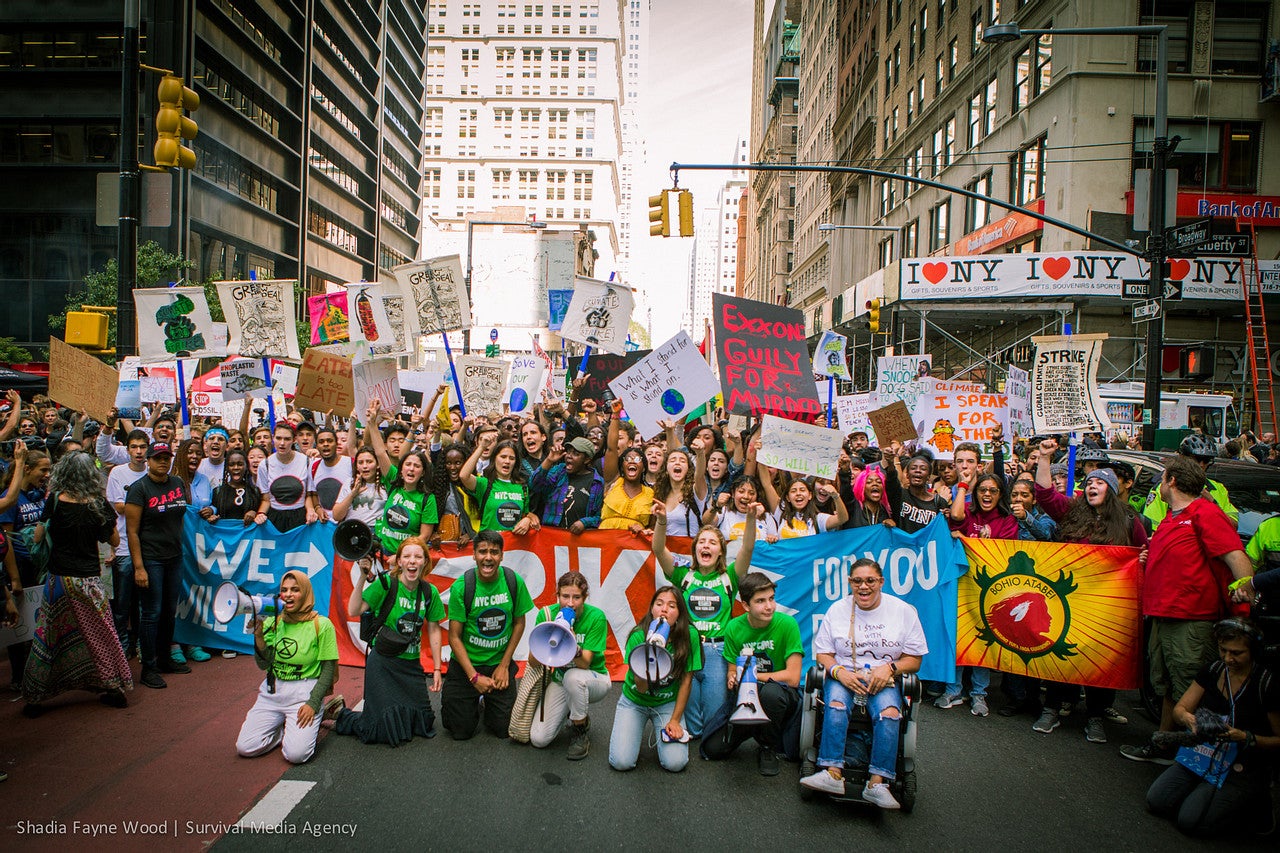 The world being left to today's youth is hurting, and it's all of our job to heal it. Shadia Fayne Wood, 350.org
SHARE

The following is an excerpt from All We Can Save: Truth, Courage, and Solutions for the Climate Crisis, an anthology of provocative and illuminating writing by women at the forefront of the climate movement, edited by Dr. Ayana Elizabeth Johnson and Dr. Katharine K. Wilkinson.

Now is the time to be a climate activist.

I am fifteen years old and spend a lot of my time on conference calls, sending emails, speaking publicly, and going to protests. Those are probably different memories than you were making at my age, but we youth know we need to make our voices heard now—because our generation will feel climate impacts the most. Scientists tell us that we have to reduce global greenhouse gas emissions by about half this decade to avoid irreversible, catastrophic effects of climate change.

The climate crisis is the largest generational inequality there is. Generations that came before mine had greater access to nature and natural resources than young people today will ever have. Rather than having abundant clean water, we face a global water crisis made worse by drought. Climate breakdown threatens global food supplies because storms, floods, and droughts make it harder to grow food. Globally, an estimated nine million people die every year from air pollution. The planet that young people are receiving is one stricken with disaster, and it’s unfair.

But we are not going to sit by and watch as our ecosystems and climate system collapse. Young people are becoming activists because of the damage happening to their communities and the environment. My activism sparked in November of 2018, when I was visiting extended family in Northern California, where I was born and raised. The state’s deadliest wildfire in history broke out, the Camp Fire near the town of Paradise. Over two hundred square miles burned, and about fourteen thousand homes were destroyed. The air where I was visiting reached over 350 on the Air Quality Index, a level deemed hazardous, inflaming my asthma. I ended up becoming very sick. For my health, my family sent me back home to New York City.

I was so upset about what had happened in my home state. I wanted to know what had caused the fire. I researched and started to see the connection between climate change and California’s wildfires. I learned that climate scientists could calculate what’s called the climate change signal out of events like the Paradise Fire. That signal tells us that climate change is intensifying wildfires and other weather events. When I learned what was happening to our planet, I was unable to ignore it.

A few weeks later, I decided to make my voice heard by going on a school strike for climate on December 14. I have been on strike every Friday since then.

As you, hopefully, know, the climate strike movement was started by a teenager in Sweden. Greta Thunberg, who was then fifteen, started striking every Friday in front of the Swedish parliament to demand action on the climate crisis. A global movement quickly exploded, and schoolchildren are now striking every Friday for climate action. When Greta started striking, she symbolically encouraged young people all around the world to make their voices heard. She inspired me to use mine.

At the time of writing this, I can’t vote (though maybe that should change), which means I can’t choose who we put in positions of power, even though I will inherit the decisions they make. So I’m taking action and demanding change in other ways.

Young activists around the world are doing whatever it takes to make our voices heard on the climate crisis. Beyond protests and civil disobedience, we are lobbying political leaders for climate action. We are engaging our local governments, civic leaders, teachers, and school administrations. We are demanding climate action in our communities and climate education in our schools.

We are also taking legal action. In 2015, twenty-one youth plaintiffs from around the United States filed a landmark case, Juliana v. U.S. The case asserts that the U.S. government contributes to climate change and is violating young people’s rights to life, liberty, and property. The plaintiffs and lawyers continue their uphill fight. In October 2019, fifteen children from across Canada sued their government for supporting the fossil fuel industry, arguing that it is jeopardizing their rights as Canadian citizens.

There’s an international legal case now too, which I have the honor of being a petitioner for. On September 23, 2018, Greta Thunberg, fourteen other children, and I filed a complaint with the UN Committee on the Rights of the Child. Children vs. Climate Crisis intends to challenge current ideas of national sovereignty and bring awareness to the global nature of the climate emergency humanity faces. This groundbreaking legal complaint states that five countries—Argentina, Brazil, France, Germany, and Turkey—are violating the Convention on the Rights of the Child because of their inaction on the climate crisis. This convention is the most widely ratified treaty on the planet, and it states that children have an inherent right to life and a supportive environment in which to grow. We hope that the five respondent countries not only begin to lead by example with their national climate actions but also bring the entire planet together to work on solutions.

A question I get asked a lot is “Do you miss just being a regular teenager?” And the answer is yes. I miss doing theater, playing volleyball, and hanging out with my friends. But the climate crisis threatens every aspect of my future. So what other choice do I have? It is a moral obligation to fight for this planet. My fight for climate action is not going to end until our planet and all its people are safe.

Already, people have had to leave their homes because of floods, hurricanes, wildfires. Already people are enduring disease outbreaks made worse by our warming planet. Already people’s food supplies are at risk because of droughts, floods, and pest invasions. We can no longer ignore the fact that climate change is causing so much destruction across our planet right now.

What truly breaks my heart is that we are simultaneously going through an ecological collapse. Extinction rates are tens to hundreds of times higher than they have been in the past ten million years, and the climate crisis will likely make them worse. One species I would be particularly sad to lose is the monarch butterfly. Growing up in Northern California, they were everywhere. It was always a highlight of my spring, seeing all of the monarch butterflies fluttering around and sipping flower nectar. I remember visiting a butterfly farm, and they would land on my extended finger; a couple landed on my head. It made me so happy seeing these ethereal flying insects.

In the winter of 2018–19, the western monarch butterfly population dropped below thirty thousand—a drop of 86 percent in a single year. Between habitat loss, pesticides, and possibly climate change, monarchs may soon be added to the endangered species list. They are not the only species facing this fate. If I end up having children, I want them to be able to experience the vast biodiversity we have today, but I am worried that they won’t get to have these experiences.

Because we are invested in a viable future, youth are stepping forward as the “conscience and moral voice” on the climate crisis. That is why we continually put ourselves in important decision-making spaces all over the world. We are here to push corporate and government leaders, and all of you adults, to do the right thing. We are doing this not only because the science says so, not only because we’re headed for ecological and planetary catastrophe, but because we are human.

After a year of weekly local strikes, helping to organize a big global strike, and participating in international legal actions, I’ve learned a lot about climate activism. Most important, I’ve learned that to make change happen quickly we need everyone to be an activist!

The biggest reason why people don’t act: They don’t know about or understand the climate crisis. My generation needs to know the unique risks and vulnerabilities we are facing; that must be a part of our education. Since schools generally aren’t doing this, I started Earth Uprising, a nonprofit that focuses on peer-to-peer climate education. Until you grown-ups get it together to improve school curricula, young people can teach one another what’s happening to our planet and how to help mitigate the climate crisis.

When adults come to talk to me at protests or conferences, they often tell me that before witnessing this youth movement, they didn’t have any hope for the future, but they now believe our generation will be the ones to save the planet and humanity. Many of you say how sorry you are for placing this burden on our shoulders—that it shouldn’t be our responsibility to right the wrongs of the generations who have come before us.

But the reality is it is too much work for one generation. Those of you who are retired and have more time on your hands, or with children you are no longer caring for, or those of you with additional resources—consider becoming a climate activist. Can you imagine how beautiful a movement led by children and grandparents would be?

To me, the responsibility to save and protect our planet for ourselves and future generations is not a burden. I think it’s a blessing, and I believe we were chosen for this job because we are the ones who can make it happen. In this unique moment in history, we must come together to save our future. Through our activism, strikes, and fearless speaking out, the youth of the world are calling on adults to care for all the glorious life that exists here—to do it now, before it’s too late.

The climate crisis is the largest challenge humans have ever faced. We young people are doing everything we can, so please join us. We need your help.

Welcome to the uprising!

Alexandria Villaseñor is a teenage climate activist, community organizer, and public speaker from New York City. She is also the founder and executive director of Earth Uprising.

Excerpted from All We Can Save: Truth, Courage, and Solutions for the Climate Crisis edited by Ayana Elizabeth Johnson and Katharine K. Wilkinson, published by Penguin Random House. All other rights reserved.