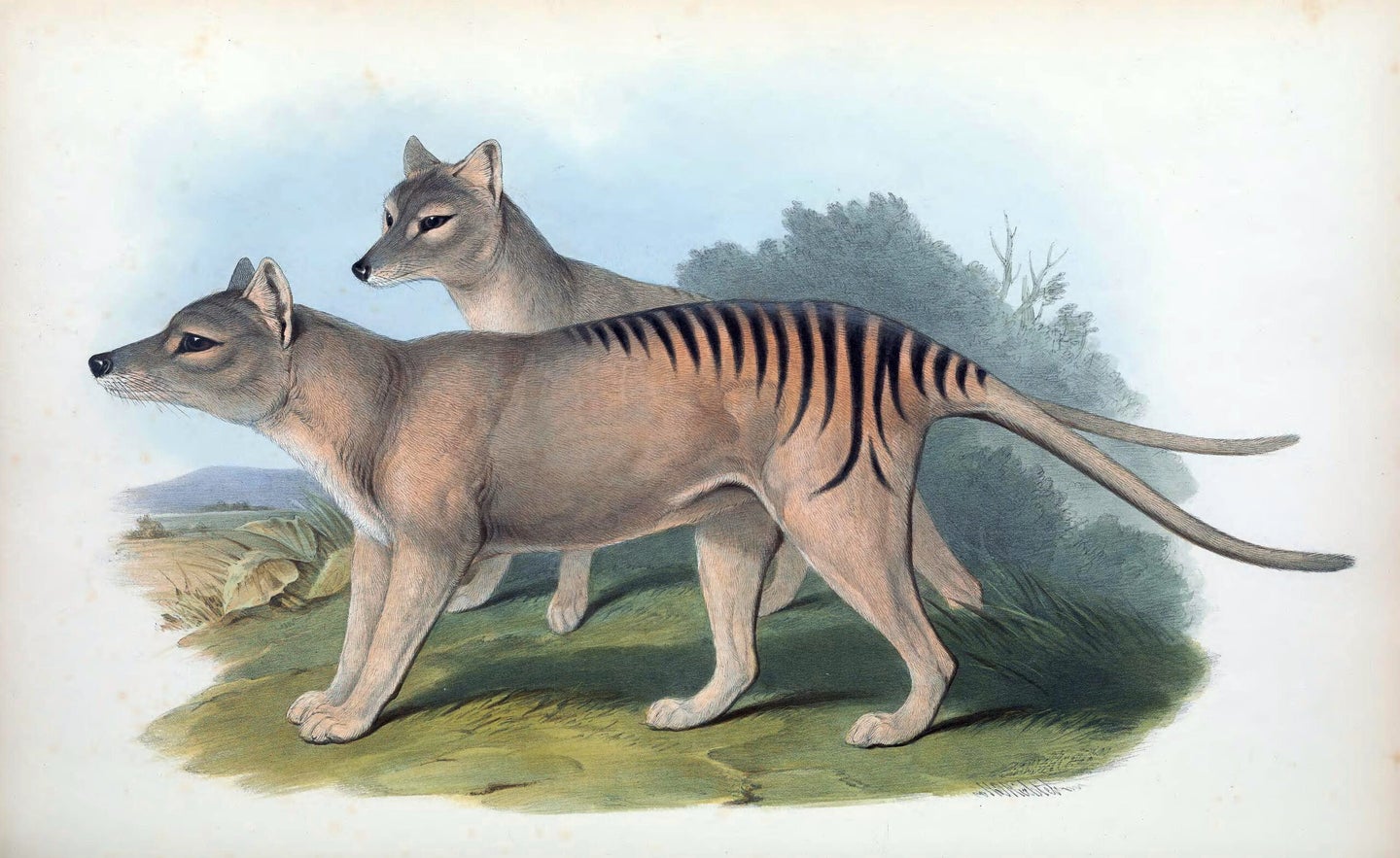 It looks like the thylacine’s (aka the Tasmanian tiger) turn to enter the debate on whether or not scientists can or should bring species back from extinction. Colossal Biosciences & Laboratories, announced yesterday that it plans to resurrect the extinct marsupial. The self-titled “de-extinction company” based in Dallas first made headlines last September when with its plans to de-extinct the Wooly Mammoth.

[ Related: “This CRISPR startup thinks that mammoths can save the Arctic. Is it right?” ]

The Tasmanian tiger was a dog-sized carnivorous marsupial with sharp claws, that was native to New Guinea, the Australian mainland, and Tasmania for four million years. Sporting yellowish to gray fur and distinctive tiger stripes covering its body, it first disappeared from the mainland about 2,000 years ago. The National Australia Museum speculates multiple factors, including over hunting and the introduction of the dingo led to this first wave of extinction.

By the late 19th and early 20th centuries, Europeans began to colonize the island of Tasmania—an island about 150 miles south of Australia. They incorrectly blamed the marsupials for killing their chickens and sheep and thylacines were slaughtered by the thousands, with the government even offering bounties for thylacine pelts. Throw in the same fight for dominance with dingoes and the Tasmanian tiger was doomed. In 1936, the last known living Tasmanian tiger died at Beaumaris Zoo in Hobart, Tasmania.

Colossal plans to use CRISPR gene-editing technology to bring back the southern marsupial. While the Jurassic Park-esque science isn’t quite here yet, the company founded by tech entrepreneur Ben Lamm and Harvard geneticist George Church, laid out a 10 step plan to re-introduce a Tasmanian tiger like animal back into the wild. They are partnering with and investing in the University of Melbourne’s Thylacine Integrated Genetic Restoration Research Lab (TIGRR). TIGRR is currently led by marsupial evolutionary biologist and Tasmanian tiger expert Andrew Pask and has already performed the crucial first step of sequencing most of the animal’s genome.

The team is comparing the sequenced thylacine genome with the fat-tailed dunnart, a marsupial from the dasyurid family that looks more like a common mouse than a dog. This species of dunnart will provide the living cells and genetic map that’s theoretically needed to theoretically create both a Tasmanian tiger genome that can create life and potentially a complete specimen.

Not everyone in the marsupial conservation community is confident that this de-extinction strategy will work. In an interview with Scientific American, Australian Museum mammal expert Kris Helgen said that the dunnart DNA and thylacine DNA are far too different from one another and separated by too many millions of years of evolution to create an animal that even resembles to Tasmanian tiger. Helgen was on the team that sequenced the thylacine’s mitochondrial genome in 2009.

In an interview with the Sydney Morning Herald, Jeremy Austin from the Australian Centre for Ancient DNA de-extinction “fairytale science,” and claimed that efforts to bring back the thylacine or the mammoth are more about media attention than the actual science. In the same interview, marsupial DNA expert Dr. Mike Westerman from La Trobe University added that he is “not convinced that it can be done with our current knowledge. Where on earth would a self-sustaining population be maintained?”

Colossal did not announce a timeline for this de-extinction project to be completed.

Australia is no stranger to seeing its species vanish and is currently in the midst of a major biodiversity crisis. It has seen years of severe drought, historic bushfires, record-breaking floods, and six mass bleaching events on the Great Barrier Reef. A 2022 State of the Environment report commissioned by the Australian government found or reiterated that 19 ecosystems are on the brink of collapse, that there are more non-native plant species in Australia versus native ones, and that the continent has lost more species to extinction than any other. The report underscores the need for a better framework for preserving biodiversity in the region to prevent further catastrophe.

Editor’s Disclosure: Matt Sechrest, the managing partner of Popular Science‘s parent company, North Equity, is an investor in Colossal. He was not involved in the assigning, writing, or editing of this story.