The Colorado River's Lake Powell and Lake Mead reservoirs haven't been this low since they were first filled up. 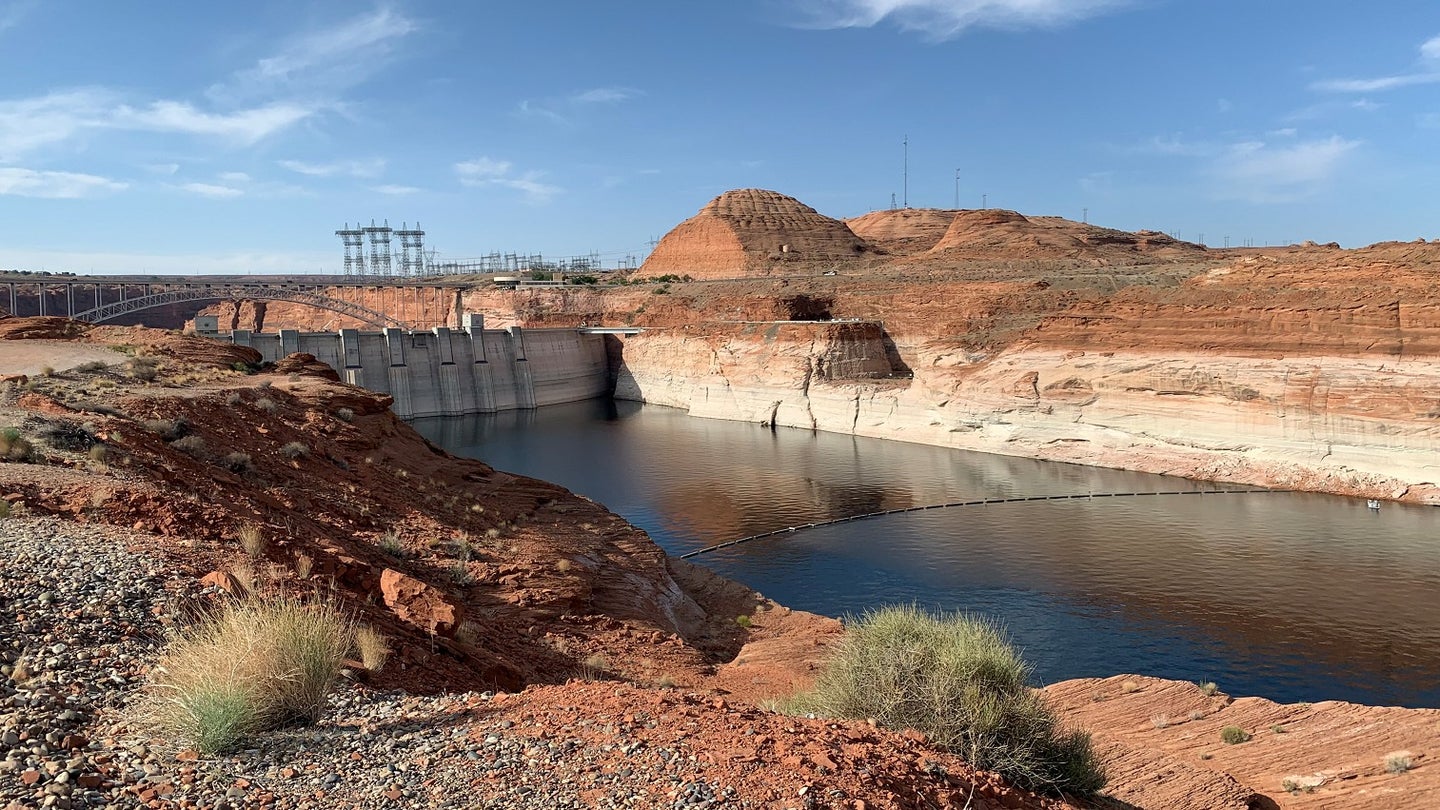 The Lake Powell reservoir has dipped to its lowest level since it was first filled in the 1960s. Upper Colorado River Commission
SHARE

More than 40 million people rely on the water reserves held by Lake Powell and Lake Mead, two of the US’s largest reservoirs that both sit along the Colorado River. But as the American West continues to endure staggering drought, water levels in both of these bodies have reached historic lows.

Lake Powell, which stretches along Utah and Arizona, dropped to 3,554 feet this week—the lowest depth since its initial filling in the 1960s. Lake Mead, the nation’s largest reservoir by water capacity, is also at its lowest level since it was filled in the 1930s. It’s currently at a depth of 1,067 feet, holding just one third of its potential capacity.

Water availability for those living in areas of drought is not the only thing at stake. As the water in Lake Mead drops, so does the energy output at the reservoir’s Hoover Dam. “Every foot of lake level decline means about 6 (megawatts) of lost capacity,” US Bureau of Reclamation spokeswoman Patricia Aaron told CNN. The Hoover Dam’s hydropower efficiency has dropped about 25 percent in recent years. And federal agencies’ projections show that relief won’t come any time soon. “We anticipate the elevation of Lake Mead to continue to decline until November 2021,” Aaron added.

[Related: Track the 6 largest wildfires across the US right now]

Other large bodies of water are also hurting from drought. Great Salt Lake reached historic lows, dropping to 4,191 feet last week. The lake hasn’t been this low since 1963, according to a US Geological Survey statement. While foreboding, “this information is critical in helping resource managers make informed decisions on Great Salt Lake resources,” said Utah Water Science Center data chief Ryan Rowland in the USGS statement. “You can’t manage what you don’t measure.”

These water level lows are alarming, but all signs indicate that this is no anomaly. Rather, these levels are the new normal that water management agencies will have to work with and plan for.

Sharon Megdal, director of the University of Arizona’s Water Resources Research Center, told The Washington Post that the historic lows in Lake Mead and Lake Powell suggest “water users throughout the Colorado River Basin, particularly the Lower Basin, must prepare for lower Colorado River water deliveries over an extended period of time.”

Continued water shortages mean that governments and agencies will need to think of new strategies to both minimize water consumption and preserve current reservoir levels. In California, for example, desalination plants are currently under construction, according to reporting by ABC News. Desalination is the process of removing mineral components from saltwater to produce potable water for drinking and farming needs. While effective, it would likely double the costs of water bills.

The western US has been in near-perpetual drought for more than two decades now, what some scientists call a megadrought. As of July 20, the most up-to-date information available, more than 99 percent of the West is experiencing drought in some form, with more than 85 percent experiencing “severe” to “exceptional” levels.

The crisis has spanned enough time now that it can no longer be considered temporary, Eric Kuhn, former general manager of the Colorado River Conservation District told the Los Angeles Times.

“According to Merriam-Webster, a drought is a temporary condition,” he said. But what is happening is something more sinister: “This is aridification.”