Alaska’s salmon are in chaos

As waters warm, unpredictable salmon returns leave some Alaskans with an abundance of salmon, and others with none. 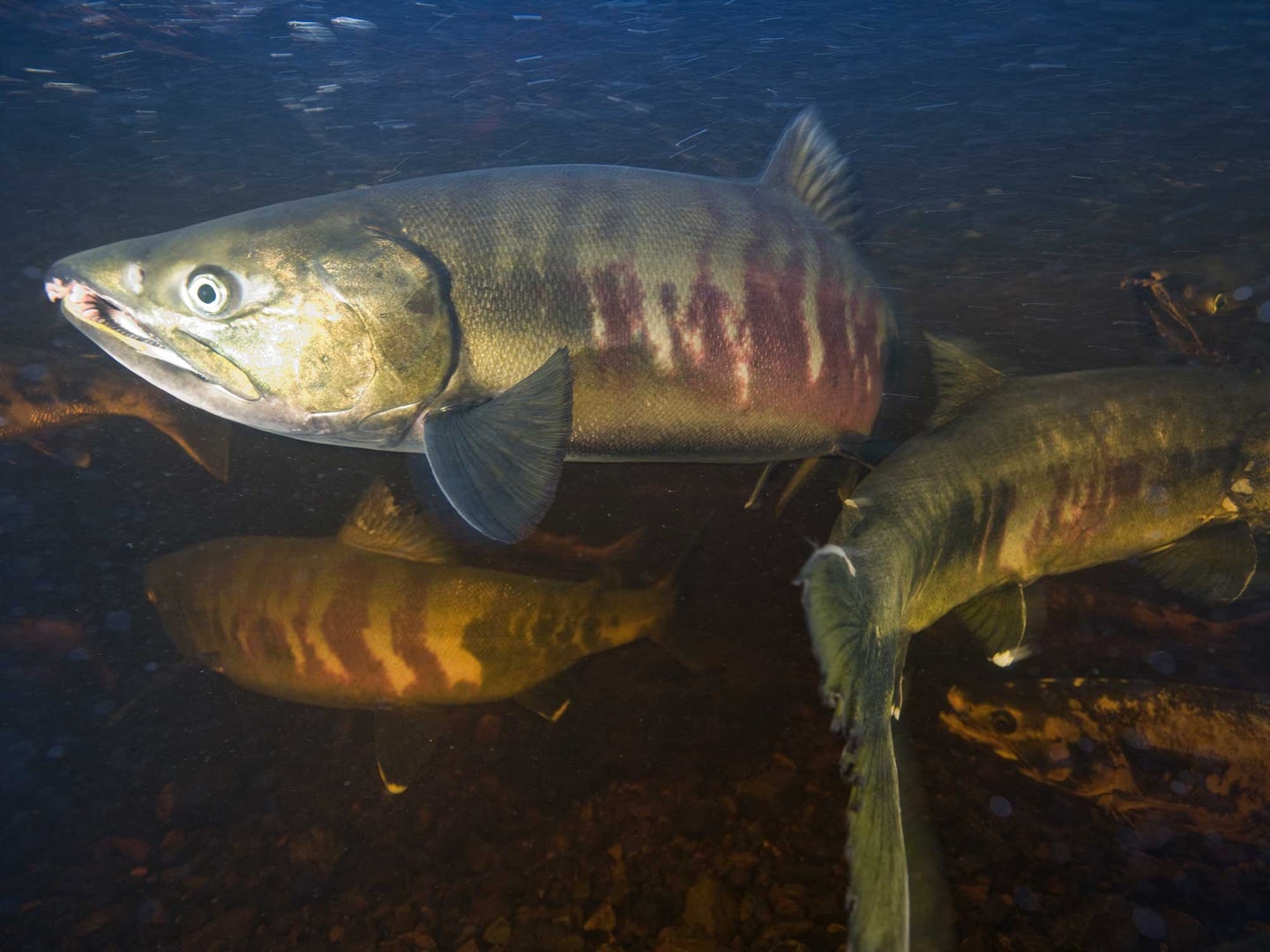 In one study of chum, researchers found that the fish were eating things outside their usual diet, like jellyfish, and, because of that, likely didn’t have enough energy stored in their bodies to survive the winter. Getty Images
SHARE

Every June, Serena Fitka goes home to her Yup’ik community of St. Mary’s, Alaska, near the confluence of the Yukon and Andreafsky rivers in the southwest part of the state. Usually, she helps her family fish for salmon and preserve it in the smokehouse for the leaner winter months. But this year, that didn’t happen: This year, there were no salmon to catch.

“I could feel the loss,” she said. “I didn’t know what to fill my days with, and I could sense it was like that for everyone along the Yukon River.”

There are five kinds of salmon in Alaska: Chinook, sockeye, chum, coho and pink. Chum is the most harvested fish on the Yukon, but both chum and chinook are crucial to the lives and culture of the roughly 50 communities around Alaska who rely on the river and its tributaries for subsistence.

Around the state, chinook counts have been declining for a decade, but this year’s run is the lowest ever recorded. Chum counts took a nosedive in 2021, and this year’s count is the second-lowest on record; as a result, state and federal fishery managers have closed chum fishing on the Yukon. This will affect more than 2,500 households in the region that rely on chum to feed their families. “That annual harvest is gone,” said Holly Carroll, a Yukon River subsistence fishery manager for the U.S. Fish and Wildlife Service. Scientists haven’t figured out why chum and chinook runs have been so poor in parts of western Alaska, but many theorize that warming ocean conditions are impacting the salmon early on in their life cycles—and some local subsistence fishers believe that commercial fishing operations in other parts of the state could be contributing as well.

Warmer waters have caused a downturn in chinook and chum numbers across the Pacific, and those changes are hurting salmon in the Yukon as well. In one study of chum, researchers found that the fish were eating things outside their usual diet, like jellyfish, and, because of that, likely didn’t have enough energy stored in their bodies to survive the winter. “That’s associated with these marine heat waves that we’ve seen in the Bering Sea as well as the Gulf of Alaska,” said Katie Howard, a fisheries scientist with the Alaska Department of Fish and Game Salmon Ocean Ecology Program. During marine heat waves, chum eat prey that is easier to catch, but often less calorically dense. Drought in the spawning grounds of Interior Alaska and Canada could also contribute to lower numbers of chinook, since it leads to lower water levels and makes the water warmer.

Meanwhile, nearly 400 miles south in Bristol Bay, a warming climate might actually be helping salmon runs instead, said Jordan Head, a state biologist working in the region. Bristol Bay fishers have harvested over 57 million sockeye this year, breaking the all-time record of 44 million fish set in 1995. The region has seen over 74 million sockeye return so far this season, the largest number in the fishery’s history. With the warmer temperatures, the lakes are frozen for less time, and the juvenile sockeye may have been able to grow larger and be more competitive as they enter the ocean, thereby increasing their odds of survival. But as the Bering Sea continues to warm, it too could see the same salmon declines as the Yukon.

Many people in the Yukon region believe that fisheries management also plays a role in which areas see increases or declines, said Fitka, the executive director of the Yukon River Drainage Fisheries Association. In particular, subsistence fishers are frustrated because commercial fishers are allowed to catch salmon in Area M, a state-managed section of waters south of the Alaska Peninsula and west of Bristol Bay.

Some of the fish caught there are passing through on their way to spawning grounds in the Yukon. Area M fishery operations have been controversial for decades, but clashes have intensified since the 2021 salmon season. Typically, about 1.7 million chum migrate up the Yukon River, but last year, only 150,000 appeared, while commercial fishermen in Area M caught nearly 1.2 million chum at sea. While Area M fishers harvest some chum salmon destined for the Yukon River and its tributaries, this does not alone explain the poor returns, according to the Alaska Department of Fish and Game, which says that a majority of the chum harvested in this fishery are not destined for the Yukon drainages.

“It’s a huge loss of food, but most importantly—and we’re hearing this every week from tribes, from people who live on the river—the most traumatic thing is a loss of culture, traditional identity,” said Carroll, the Yukon fisheries manager. “It’s traumatic.” Linda Behnken, the executive director of the Alaska Longline Fishermen’s Association, said the dwindling salmon numbers in the Yukon-Kuskokwim area are a climate justice issue, but also an opportunity to build community. “Everybody in Alaska cares about salmon and recognizes the importance of maintaining healthy salmon runs and how important that is to culture and food security and to the economy of this state,” says Behnken—and that presents an opportunity for connection.

In an effort to share the salmon wealth, programs like Fish for Families have popped up to distribute Bristol Bay’s surplus fish to communities across Alaska that are experiencing dismal salmon returns.

George Anderson is a fisherman and president of Chignik Intertribal Coalition, a group of tribal members and Chignik fishery stakeholders that formed in 2018 when sockeye runs failed in the area. Donations to Chignik started in 2020, when COVID-19-related supply chain disruptions combined with record-low salmon runs prompted a food shortage in the community. That year, the community received more than 30,000 pounds of sockeye from Bristol Bay. Families receive the fish whole so they have the option to process the salmon to their liking and share their cultural traditions with younger generations.

“We’d really, really prefer to be harvesting our own fish that are coming here,” Anderson said, but he and other Chignik families are grateful for the donations. “We’re learning all the time that there is always a surprise around the corner, whether you don’t have enough or if you have too much.”

After two years of no chum fishing, Fitka said people in the Yukon region have turned to harvesting other species. In addition to small amounts of pink and sockeye salmon, fishers in the Yukon River and its tributaries are also catching sheefish, grayling, burbot, pike and whitefish. “We have to rely on what we have,” Fitka said.

Carroll, the Yukon River fishery manager, is hopeful that the salmon will recover in the long run. Western Alaska’s chinook and chum crashed simultaneously around 2000, she said, but both species saw large returns within a few years. Today, a warming ocean and poor food quality for chum could make it harder for them to bounce back, but overall, salmon are resilient. “I think we’ll be fishing for those species again,” Carroll said. “I just hope that folks can kind of hold on to that, and toe the line and try to find other food sources, other ways of practicing their cultural traditions until we can get back to fishing.”