Eating seafood can be more sustainable and healthy than red meat

Going surf over turf can lead to a smaller greenhouse gas footprint and better nutrition. 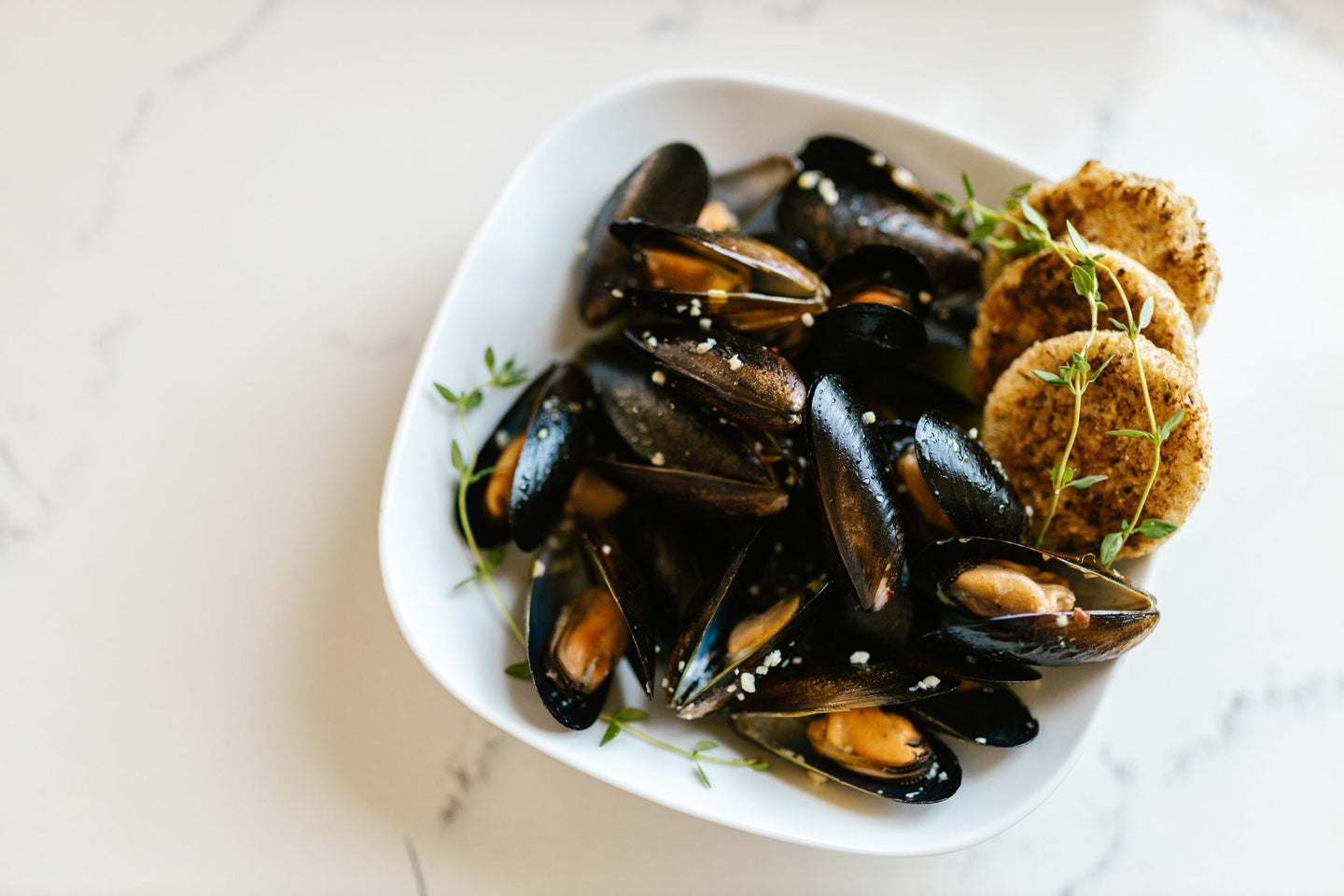 Bivalves like mussels and oysters are a win for healthy and low-GHG protein. RODNAE Productions on Pexels
SHARE

Humans have consumed meat all throughout history, but more recently, meat consumption has exploded. Global meat production reached about 375 million tons in 2018, more than triple the amount that the world produced fifty years ago.

The production of animal-based foods carry heavy environmental impacts, using approximately 2422 cubic gigameters of water yearly. They also account for about 57 percent of all greenhouse gas (GHG) emissions from food production—almost twice the emissions from plant-based foods—not to mention that livestock grazing takes up about 26 percent of the Earth’s ice-free land.

Given its impact on climate change, many argue that it’s time to reduce red meat consumption and explore viable alternatives. For some meat lovers, seafood may be the ideal swap.

Seafood is a relatively low climate impact source of highly nutritious food. The authors of a new Nature study analyzed the GHG emissions associated with the production of various seafood like whitefish and crustaceans as well as their respective nutrient densities. They found that reducing the consumption of red meat and replacing it with certain seafood species may improve nutrition and reduce GHG emissions at the same time.

[Related: Eating sustainably may mean skipping the lobster for now.]

Seafood contains nutrients that other foods don’t have, or only in very low levels, such as iodine, vitamin D, and omega-3 fatty acids, says Friederike Ziegler, study author and senior scientist at the RISE Research Institutes of Sweden. In terms of nutrition and greenhouse gas emissions, those that performed best or had the lowest emissions per nutrient density were small pelagic species (like anchovies, mackerels, and herrings), bivalves like mussels and oysters, and salmonids, she adds.

Based on the study, large pelagics like yellowfin tuna also had high nutrient density scores, but they produced more emissions than small pelagics, bivalves, and salmonids. Meanwhile, most whitefish species—like the Atlantic cod—had fewer GHG emissions per edible product than large pelagics, but they weren’t as nutritious.

“Diet shift is a key strategy to reduce greenhouse gas emissions,” says Greg Keoleian, director of the Center for Sustainable Systems at the University of Michigan’s School for Environment and Sustainability who was not involved in the study. Shifting from beef to different seafood may lead to a large reduction in emissions, but sustainability is hardly ever that simple.

A primary concern for switching from turf to surf is the sustainable production of each seafood species. This depends on various factors such as the source and production method as well as the feed for aquaculture, he adds.

In 1974, about 10 percent of fish stocks were being fished at biologically unsustainable levels, meaning they were being caught at a rate faster than the fish can recover its population. Since then, this percentage has tripled—rising to 31 percent in 2013 and 34 percent in 2020. Overfishing, the main driver of ocean wildlife population decline, can cause the loss of breeders, disruption of natural communities, and a massive depletion of many species, thereby harming ocean biodiversity.

“Many small pelagic fish stocks are currently overfished and they play a vital role in aquatic ecosystems,” says Keoleian. “These fish are also heavily fished for fishmeal used in aquaculture.  Many salmon stocks are also overfished and bivalves populations are declining due to climate change, so sustainability of production from increased demand could be a concern.”

There is potential to increase production and total consumption of small pelagic species by making use of underexploited species. Additionally, utilizing other species that typically end up in fishmeal and fish oil in aquafeeds could be beneficial, says Ray Hilborn, professor at the University of Washington School of Aquatic and Fishery Sciences.

Salmon, on the other hand, is pretty much fully exploited. “Any hopes for increased hatchery production are dubious because there appears to be competition for food in the North Pacific ocean, so more hatcheries would not likely increase total production,” says Hilborn.

Policymakers play a major role in shaping sustainable seafood production. They affect the food system from different angles, ranging from dietary advice that influences people’s eating habits to fishing regulations or aquaculture licensing procedures that shape the sustainability and volume of production in fisheries and aquaculture, says Ziegler.

For example, the Keep Finfish Free Act of 2019 aimed to prohibit the issuance of permits to conduct finfish aquaculture in the US Exclusive Economic Zone, unless specifically authorized by Congress. The health and integrity of Alaska’s wild fish stock must be protected and properly managed, otherwise, industrial aquaculture operations may threaten the ecosystem with non-native and genetically modified fish species, according to Alaska Rep. Don Young who filed the legislation.

[Related: How to eat sustainably without sacrificing your favorite foods.]

To increase seafood production without causing further environmental harm, all wild stocks must be managed sustainably, which means fishing within their biological limits and protecting the ecosystem they depend on, says Ziegler. This maximizes the harvest from capture fisheries.

Ensuring that the harvested fish biomass is used for food and not wasted along the supply chain would also make a difference. A lot of fish processing trimmings are used in feeds, even though it is fully possible to utilize more of these side streams to produce nutritious food or food ingredients, she adds.

Overall, if you want to reduce your carbon footprint and eat red meat less frequently, try incorporating more sustainably-sourced seafood into your diet. Not only will you be helping the planet, but you’ll also benefit from having a more varied diet.