Canadians found a safer way to transport oil and, yes, it looks like a hockey puck 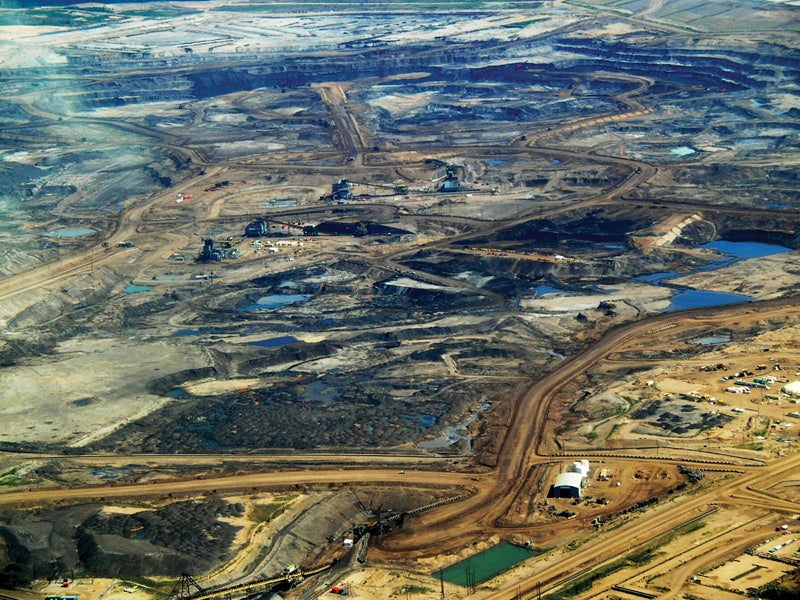 A bird's eye view of some of Canada's most productive tar sands in Alberta. Howl Arts Collective via Flickr
SHARE

Our northern neighbors have invented a quintessentially-Canadian way of transporting oil from tar sands: They’re forging it into solid, hockey-puck-like briquettes. Dubbed ‘CanaPux,’ these bitumen-based blocks patented by the Canadian National Railway might make transporting oil by rail safer, cheaper, and more environmentally friendly—or at least as friendly as viscous petroleum can be.

The amount of oil transported by rail within Canada drastically increased this past year, partly as a result of several pipeline proposals being blocked, including the controversial Trans Mountain and Keystone XL. That also means that more Canadian oil is now being exported via rail to the United States, and with it a host of safety concerns.

Moving oil via rail is riskier than pushing it through a pipeline: Spills are more than twice as likely, according to a 2017 report by the Fraser Institute, a Canadian think tank. The chance of a spill is still low (less than one incident per 5 million barrels), but the aftermath of an accident can be devastating. In the summer of 2018, a train derailed in Iowa, spilling an estimated 230,000 gallons of crude oil into flooded fields alongside the track and raising concerns about drinking water being contaminated downstream. In 2013, a train carrying 72 tanks of oil exploded in a small town in the northeastern Canadian province of Quebec, killing 47 people.

Since 2014, Canadian National Railway has been working on a technique to solidify heavy oil, or bitumen—the dark-colored sludge that comes out of Canada’s oil sands—that they say will make oil transport safer.

“Think of it as molasses,” says James Auld, who is leading the CanaPux project. To ship bitumen in pipelines or in railcar tankers right now, you have to heat it up or dilute it with a lighter hydrocarbon to make it flow, he explains. But that sticky, thick quality is also the reason it’s possible to turn the stuff into a puck. Researchers working with Canadian National Railway make palm-sized CanaPux by mixing shreds of recyclable plastics into heated bitumen and shaping the mixture into pucks about the size of a bar of soap. They encase each block in a thin layer of plastic to stop them from sticking together when stacked into train cars. When the bitumen bricks reach their destination, they are heated to separate the oil from the plastic, which floats on top of the oil so it can easily be scooped off and re-used.

Best of all, the pucks are also inert. They’re less flammable than diluted bitumen, they’re weather-proof and they don’t leak. In the event of a spill, they could just be picked up.

Canadian National Railway has tested the technology in a lab in Edmonton, where they have a machine that can build CanaPux one at a time. They’re now working with partners to build a commercial-scale pilot plant in Alberta that could process 10,000 barrels of bitumen per day. Because the resulting pucks are lighter and provide more efficient storage than traditional barrels, they’ll be able to load each tanker car with more weight—and therefore more oil. The company hopes to start using CanaPux for transportation by the end of 2020.

While the technology may reduce oil spills, it leaves a bigger problem unresolved. Environmental activists point out that more oil sands production is not what we need right now. Although emissions from Canada’s oil sands only make up about 0.15 percent of global emissions, they are the country’s fastest growing source of greenhouse gases. If the oil sands are further developed, “it will be game over for the climate,” writes former NASA scientist James Hansen in a 2012 New York Times op-ed responding to comments from then-President Barack Obama that Canada would develop its reserves “regardless of what we do.” CanaPux or not, the impact of oil sands development remains the same.

For the foreseeable future, however, there will be a demand for bitumen, Auld says. “Even if we all switch to electric vehicles, we still need roads to drive on,” he says. And, as an essential component of asphalt, bitumen is used to pave those roads. CanaPux could at least make it possible to move heavy oil in a safer, more environmentally-friendly way.

The question remains: Can you play hockey with these pucks?

“They’re not the most ideal shape,” Auld says, but there’s no reason why you couldn’t. “They’re solid.”