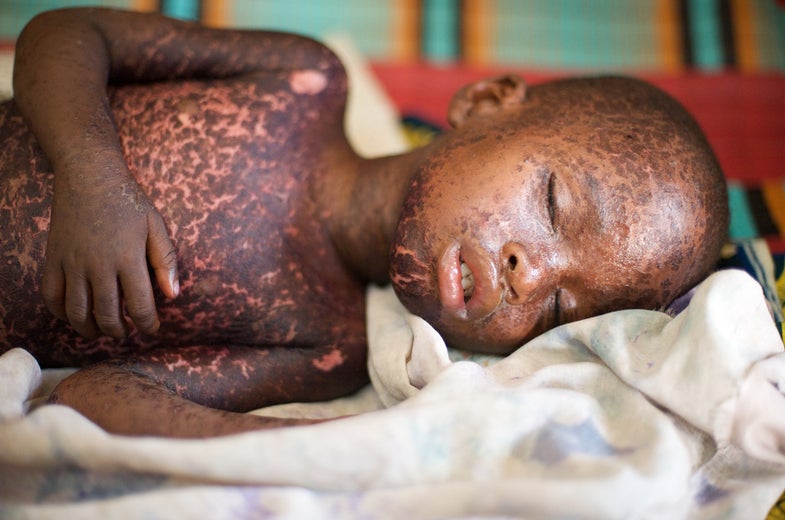 The Ebola epidemic in West Africa may be quieting down, but its deadly impacts are still rippling through the region. After the epidemic wreaked havoc on health care systems in Liberia, Sierra Leone, and Guinea, those Ebola-stricken countries are now at risk for other outbreaks. According to a study in Science, the measles and other vaccine-preventable illnesses could claim as many lives as Ebola, or more, in the coming months.

Ebola has caused at least 24,000 infections and 9,800 deaths in West Africa since the start of the outbreak a year ago. The number of new cases is finally falling, but in the wake of the epidemic, routine vaccinations have been put on the back burner. Many healthcare facilities have closed, and patients are avoiding those that remain open, for fear of contracting Ebola. These factors add up to a growing pool of unvaccinated kids in West African who are at risk for measles and other preventable diseases.

Measles causes fever and respiratory problems. Complications such as pneumonia and encephalitis can make it deadly.

Outbreaks of measles often follow disasters such as natural disasters or political crises. “The reason that measles follows disasters are, one, that it’s so incredibly contagious compared to other vaccine-preventable diseases,” said study co-author Justin Lessler, an epidemiologist at Johns Hopkins University, said in a press conference. “It’s one of the first diseases for which we lose our herd protection against an outbreak.”

“Measles is incredibly contagious compared to other vaccine-preventable diseases

“The second [reason] is that measles vaccination rates tend to already be a bit lower than for other diseases because people have to receive the vaccination later in their lives.”

Lessler and his team used birth rates and health care data to estimate how many people in Guinea, Sierra Leone, and Liberia are not vaccinated for measles. Then they calculated how many of those people would be expected to get infected if an outbreak were to occur, and how many would die.

They estimated that before the Ebola outbreak, there were 778,000 unvaccinated kids in the three countries. After 12 months of interrupted vaccinations due to Ebola (they estimate vaccinations dropped by 75 percent), the number has likely grown to 1,068,833. And if vaccine interruptions continue for another six months, the researchers estimate that the number will rise to 1,129,376.

Not all of those unvaccinated kids will get measles. But without heightened vaccination campaigns, the region could see 100,000 more measles infections than it would have had before the Ebola epidemic, and an additional 2,000 to 16,000 deaths.

Other vaccine-preventable illnesses including polio, pertussis, and diphtheria also have the potential to wreak havoc on the already ravaged region.

On the bright side, the estimates are a projection of what could happen if governments and NGOs continue ‘business as usual’ for another six months. Providing more support for comprehensive vaccine programs could prevent many of those infections and deaths.

“We would suggest that a bundle of vaccines be included in such a campaign,” said lead author Saki Takahasi. She suggested the measles vaccine could be paired with vaccines for diphtheria, tetanus, and polio, as well as vitamin A supplements that reduce measles infections and deaths.