Pretty good superpower to have, if you ask me. 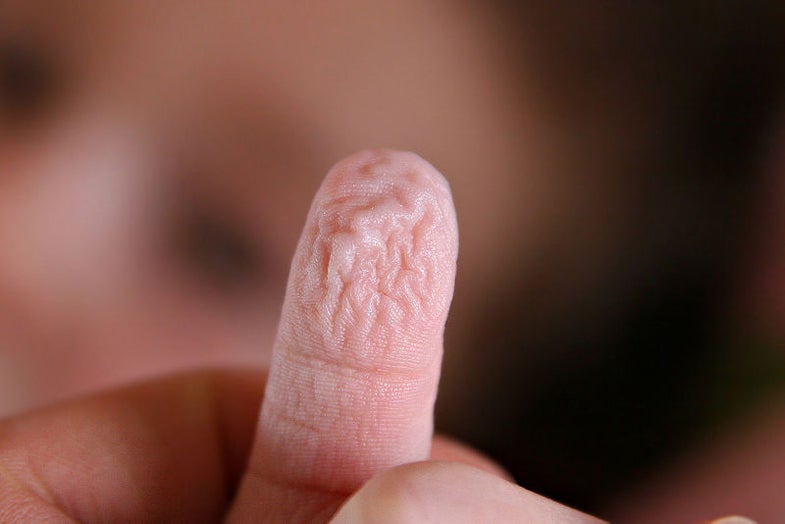 Some lizards and amphibians have the ability to regrow severed tails or limbs–in fact, the blue-tailed skink abandons its tail intentionally to distract predators. But humans, despite our amazing advancements in the field of spying on each other, are typically thought to lack this superpower-like ability. But in fact, we’re more like blue-tailed skinks than you’d think!

Back in 2010, a woman named Deepa Kulkarni lost the tip of her finger to an altercation with a slammed door. She was able to grow it back with the use of a powder made of ground-up pig bladder (seriously) called MatriStem which, according to ACell, the company that makes it, “incorporates into the surrounding tissue during the healing process and leaves new tissue where scar tissue formation is normally expected.” Basically, MatriStem works as a sort of scaffolding–it attracts stem cells from, they think, the bone marrow, which comes out and builds tissue on top of the MatriStem powder rather than merely scarring over. It worked for Kulkarni, but it was theorized that it only worked because she retained a bit of the nail on her partially-severed finger.

Dr. Mayumi Ito, a stem cell biologist and dermatologist at NYU’s Langone Medical Center, recently published a paper in which he and his team examined exactly how this works, and confirmed the theory about the fingernail. Turns out the human fingernail includes a group of stem cells that promote cell growth–not just the rest of a fingernail, but tissue and even bone. Ito named this family of stem cells “Wnts,” pronounced “wints,” and found that in mice, these cells produce chemicals that regrew bone and flesh.

So what if, in the absence of natural Wnts, you used genetic engineering to force tissue to produce these proteins? Would the natural effect–regrown tissue and bone–follow?

Amazingly, yes. When they forced the production of Wnts in mice, the team managed to regrow bone and tissue without any of the natural stem cells being present at all. This has huge implications for the treatment of amputations–the experiment was only performed on mice, but if the technique holds true for humans, this could be the beginning of the end for lost limbs.