How To Fast-Track An Ebola Vaccine

Companies, governments, and other groups are considering compromises such as speedier quality-control tests and relaxed packaging rules. 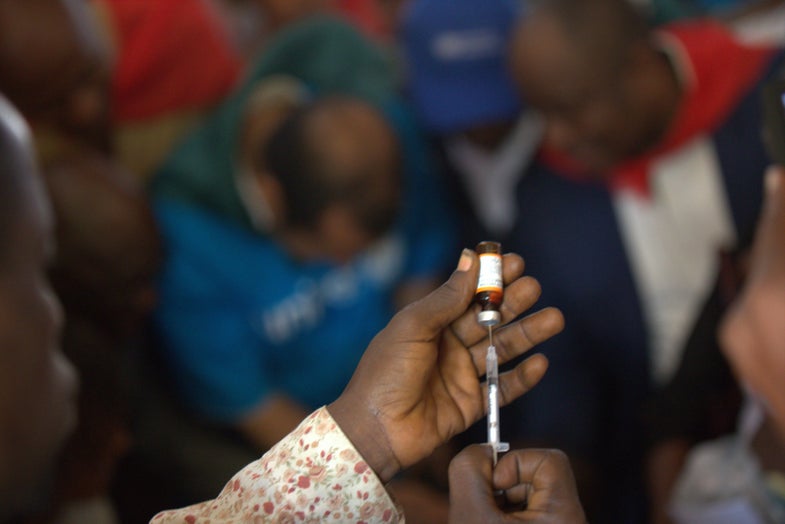 UNICEF Guinea Country Representative Dr. Mohamed Ag Ayoya asists volunteers in the vaccination of children 6 months to 10 years old at the launch of the massive measles vaccination campaign in Conakry, Guinea. UNICEF supplied over 1.7 million doses of the vaccine along with other supplies. Timothy La Rose
SHARE

The World Health Organization said it will have Ebola vaccines ready to give to hundreds of thousands of West Africans by the middle of next year, Reuters reports. Right now, there’s no approved vaccine for Ebola. Researchers worked on vaccines before, but trials stalled because the disease is rare and because it mostly afflicts poor countries, so companies haven’t been motivated to complete trials.

WHO is now considering two vaccines that have started testing in humans, plus five additional vaccines that aren’t yet ready for human trials. Typically, clinical trials of experimental vaccines and drugs take years to conduct, but drug companies and other groups are trying to figure out how to get these vaccines through faster.

A vaccine alone won’t end the epidemic in West Africa, but WHO thinks it could “turn the tide,” Reuters reports. Marie-Paule Kieny, the assistant director general for health systems and innovation at WHO, has volunteered for vaccine trials herself, Science reports.

Vaccines must meet an especially high bar before approval because healthy people get them. They’re not like experimental treatments, which would go to people already at some risk for dying of Ebola. While both vaccines and treatments generally go through the same approval process, when regulators and ethicists make judgments about, “Do I want to approve this?” they’re often much stricter about side effects when it comes to vaccines. An Ebola treatment might get approved even if it gives people severe side effects. An Ebola vaccine might not. Still, drug companies, WHO, and other organizations are figuring out ways to speed approval while keeping risks low, compared to the potential benefit of having a way to protect healthcare workers and the friends and family of people who fall ill with Ebola.

A vaccine alone won’t end the epidemic in West Africa, but WHO thinks it could “turn the tide.”

Science‘s reporting offers insight into some strategies companies may use. GlaxoSmithKline, a Belgium-based pharmaceutical company that’s working on what’s now the world’s most advanced Ebola vaccine, has proposed using speedier quality-control tests. The company also plans to run two trials of its vaccines at once. The two trials will take place in different countries—Liberia and Sierra Leone—and will have different structures—the Liberia trial is more classically designed, with some study volunteers taking a placebo, while the Sierra Leone trial has a “stepped-up wedge” design that involves giving everybody the experimental shot, just at different times. It’s a case of hedging their bets. “One of the trials may fail for logistics reasons,” the head of GlaxoSmithKline’s Ebola vaccine effort, Ripley Ballou, told Science. “We only have one shot to get this right.

Meanwhile, simply making enough vaccines is a challenge. The Ebola vaccine must be packaged in a biosafety level 2 facility, but GlaxoSmithKline is asking regulatory agencies whether they can relax some rules, Science reports. If not, the company says it will have trouble producing enough of the other vaccines it sells, such as measles, mumps, and rubella vaccines.

The first doses of the vaccine will go to people at high risk for contracting Ebola, including healthcare workers, contact tracers, and workers who bury the dead. A wider vaccination campaign may happen after that.